In the MCU, besides Iron Man’s high-class, high-quality armor, Black Panther’s costume, called Panther Habit, is also very special with many impressive technologies. Woven from sturdy vibranium metal, this suit has been used by generations of the kings of Wakanda as a signature weapon that empowers them to shoulder the responsibility of defending their homeland. 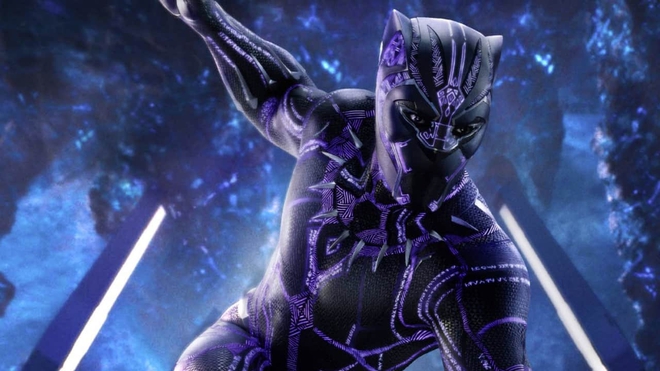 The Panther Habit armor of the Black Panther generations is as impressive as Tony Stark’s high-end armor models.

Because it is made of vibranium, Panther Habit possesses all the properties of this fictional metal such as bulletproof, protecting the user inside from strong impacts and is almost indestructible. Accompanied by a set of sharp claws capable of piercing straight through ordinary metal, and used to attack enemies. Along with that is a pair of headphones that help the user to hear sound frequencies that the human ear cannot normally perceive, allowing the Black Panther warrior to better perceive his surroundings and plan. more effective combat.

Coming to T’Challa’s generation, the Panther Habit set even received a lot of unique upgrades thanks to the genius minds of Shuri and the Wakandan Design Group team. This suit is much lighter than previous versions thanks to the application of nanotechnology, is contained within T’Challa’s necklace and automatically wraps his body in battle, quite similar to Tony’s armor. Stark in the 2 latest Avengers movies. In addition, it can also absorb kinetic energy from enemy attacks and convert them into energy to counterattack. The more kinetic energy absorbed, the stronger T’Challa’s attack ability will be.

One of the most notable upgrades of Panther Habit is the shoes with the ability to absorb sound, making T’Challa’s movements soundless, especially suitable when he performs tasks. stealthy, adversarial exploration. In addition, thanks to nanotechnology, this shoe actually consists of only the sole, and will automatically hug T’Challa’s feet every time he steps on them and form a complete pair of shoes.

Special shoes have the ability to insert themselves into T’Challa’s feet when standing up thanks to the application of nanotechnology, and it can also absorb sound to help him move more quietly.

So can we make a unique shoe similar to Black Panther’s in real life? YouTuber Jake Laser tried his hand at this project. If you remember, this is the guy who combined magnetic water with hundreds of thousands of magnetic balls to recreate Venom’s impressive transformation on the big screen. This time, his goal is to create shoes that automatically hug the user’s foot when standing on the sole, and most importantly, absorb sound so that when moving, it makes less noise.

With the first mission, of course we cannot apply nanotechnology like in Black Panther. Instead, Jake uses a shoe cover made of highly elastic rubber, combined with a lever mechanism in the shoe. Simply standing on the sole of the shoe, the lever will release, freeing the high layer that surrounds the user’s foot.

As for the second task, which is also the most difficult, Jake has combined many different methods such as sound reflection, noise cancellation mechanism in many current headset models, or limiting the contact surface of the device. feet with the ground. The sole of the shoe received special attention from him and consists of many different layers of sound insulation, including 2 layers of sound absorption, 1 layer of airgel (a type of super light and porous solid), 1 layer of young rubber, and then 1 more layer of rubber. another layer of airgel and finally a thick layer of cotton fabric. All will help optimize the sound absorption of the shoe and help it operate quite gently in normal conditions. 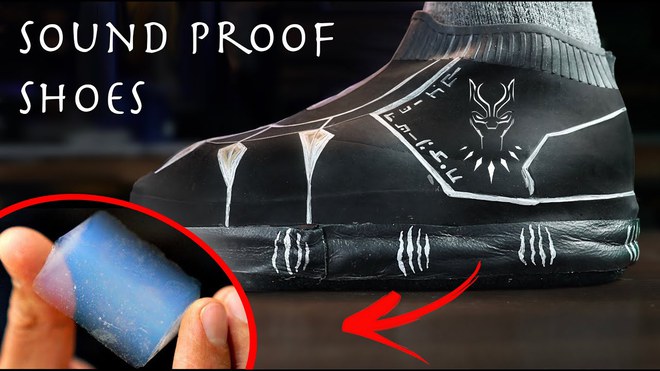 Besides, Jake Laser also decorates his products with motifs and styles inspired by the land of Wakanda in Black Panther. And when compared to the Nike Air Force 1, it’s easy to see how quietly this YouTuber’s shoes operate, even when running fast on concrete. Of course, this can only be considered a “phase-ke” of a fictional technology in a Marvel movie, so don’t expect you to still be able to make noise when walking on creaking wooden floors.

Specifically, the process of making and testing Black Panther’s sound-absorbing shoes, please watch the video below.

[Vietsub] This is Black Panther’s super soundproof shoes, just stand up and automatically hug the user’s foot, without wasting time putting on shoes.