CNN reports: Vietnamese electric vehicle manufacturer VinFast has a big American dream, which is to attack the US market with two electric SUV models that will be launched today. VinFast has announced a headquarters in California and plans to invest more than $200 million there.

Talking to CNN editor, Mr. Michael Lohscheller – who used to hold the position of Vice President of Volkswagen America and is currently the General Director of VinFast worldwide – said:Today is a very important day for VinFast because we will be at the LA Auto Show. How will we do that? Launched 2 electric SUV models. Design to look forward to, a lot of technological innovation on the cars, and of course they are electric“. 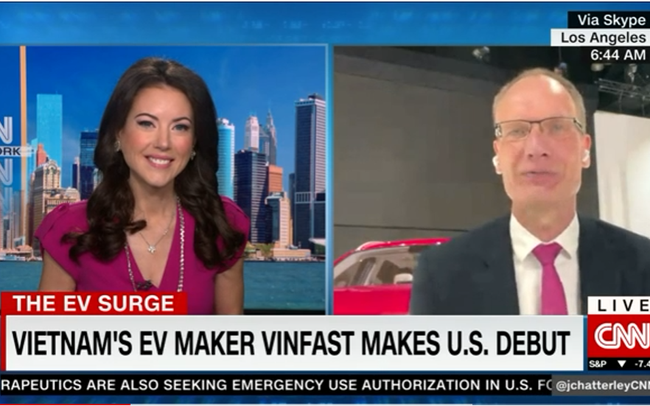 This CEO added: “We bring VinFast to the US only with electric cars. Because what belongs to the past is no longer relevant to the future. By bringing only electric vehicles, we want to open up a new space for smart mobility, sustainable mobility, and of course we have a lot of technological innovations on the car.“.

When asked about the car’s top speed, charging time and rolling price, is about $ 30,000 – a fairly low price, Mr. Michael Lohscheller shared: “Pricing is a bit hard to disclose, but we care a lot about customer experience, and what we want to do is provide our customers with world-class, quality products at a fair price, along with excellent customer service. great service, so we can come to your family“.

This general director only revealed that VinFast will have 2 different levels, and the model can run for more than 500 km on a single charge, and the detailed price will be announced later.

Answering the CNN editor about VinFast’s competitiveness and the reason why VinFast chose to launch at this time, and in the US, not China, the VinFast representative affirmed:First of all, the US is a very important global market and we want to compete here. Of course, this is the right time because the auto industry is changing. We feel this is the perfect time to bring electric cars and compete. And we also want to make VinFast an international electric car brand. So we’re here today, Los Angeles, but we’re also going to Europe“.

“It’s exciting that we can bring VinFast – a 4-year-old young brand from Vietnam – into a global brand.“- CEO Michael Lohscheller said.

Previously, on November 16, VinFast officially announced and put into operation the headquarters of its branch in the United States. This headquarters is located in the Playa Vista area – dubbed “Silicon Beach” of the city of Los Angeles.

VinFast is one of the few foreign businesses to receive the California Competes tax incentives awarded by the California Governor’s Office of Business and Economic Development.

The $20.5 million tax incentive that VinFast received is the largest CalCompetes tax incentive ever given to an automaker, and one of the 10 largest incentives awarded to any company. any in CalCompetes’ nearly 10-year history.

VinFast’s headquarters has an area of ​​​​about 1,400 m .2 and may be further expanded in the future. This is expected to be the workplace of the leadership team and more than 400 VinFast employees in the near future.

Along with that, VinFast US will also invest in building branch offices, customer care centers in many areas and deploy a network of showrooms and service workshops to introduce electric vehicle brands and products to customers. US consumption, as well as promoting future investment plans.