Rare earth elements are a group of metals with important components for modern science and technology. Stockpiles for rare earth mining are increasingly important and valuable.

The graphic below is compiled based on data from the United States Geological Society (USGS), which provides information on the countries with the largest known reserves of rare earth elements (REEs).

What is rare earth? 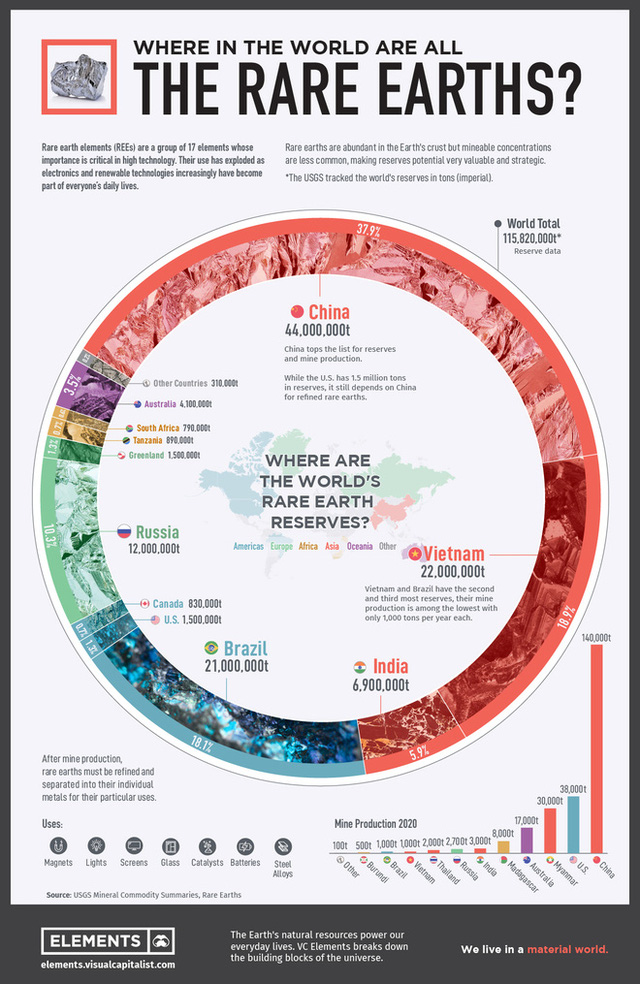 The term “rare earth” is often misunderstood because rare earth metals are actually abundant in the Earth’s crust. However, they are rarely found in large aggregates and are often found with other minerals.

What are rare earths used for?

Alloys of neodymium (Nd) and samarium (Sm) can be used to create strong magnets that withstand high temperatures, which makes them ideal for many critical defense and electronic applications.

China tops the list in terms of mine production and reserves of rare earth elements, with reserves of 44 million tons and annual mining output of 140,000 tons.

Meanwhile, the US has 1.5 million tons of rare earth reserves but still depends on imported refined rare earths from China.

Why does Vietnam not exploit many rare earths?

Dr. Nguyen Van Ban, former Head of Bauxite – Aluminum Department of Vietnam Minerals Corporation (former), assessed that Vietnam may have the opportunity to export rare earths to the US, but it is necessary to clearly recognize the disadvantages of rare earths. in Vietnam.

While heavy rare earths have many uses and are applied in more high-tech industries, Vietnam has rare earths with less weight, mainly light rare earths.

Japan has expressed interest in Vietnam’s rare earths for a long time, but for many reasons, Japan has not promoted the exploitation of rare earths in Vietnam. Besides, rare earth mining and processing to separate each element in rare earth are not easy.

“To separate each rare earth metal into each element to achieve high purity is extremely complicated. Without careful separation, rare earth metals can evaporate with oxygen, so only advanced countries can only have the ability to separate these rare elements in rare earths”, Dr. Nguyen Van Ban shared. 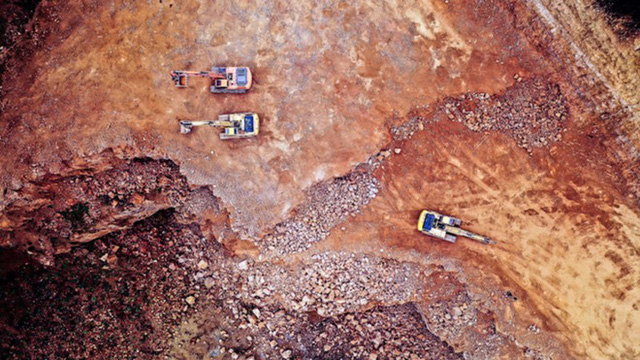 Mining and refining rare earths is not easy.

With current technology, Vietnam can only export raw materials, but cannot separate elements in rare earths or process them to create refined rare earths. In addition, Dr. Nguyen Van Ban said that rare earth mining also has the risk of causing damage to the environment because in rare earth there are radioactive elements, quite dangerous for workers and the surrounding environment.

Discussing this issue, Assoc. Prof. Dr. Nguyen Xuan Khien, former director of the Institute of Geosciences and Minerals, Ministry of Natural Resources and Environment, said that in order to export rare earths, land mining enterprises must go through the process. the process of enriching the minerals inside rare earth ores to meet export standards. In addition, to export also depends on the needs of customers.

“For example, exporting rare earths to make electronic components or making materials for other manufacturing industries, each export demand has its own standard, very high requirements on the purity of rare earth elements, rather than they are equal”. Assoc. Prof. Dr. Nguyen Xuan Khien said.

Assoc. Dr. Nguyen Xuan Khien also shares the same opinion with Dr. Nguyen Van Ban that in order to exploit and export rare earths, the most important thing is to ensure output, which is to determine the needs of countries.

According to VnExpress, last year, Associate Professor Phan Quang Van and his colleagues from the University of Mining and Geology, in collaboration with a number of domestic research institutes and a group of German experts, sought to determine the characteristics of rare earth minerals in the Nam Xe region (Lai). Chau) and did some other research.