Since its launch in 2014, DDR4 RAM technology has made great strides. Starting with a clock speed of only 1600MHz, slightly above the average of DDR3 until 2133MHz is the common standard at the moment, now high-end DDR4 RAM kits with clocks of 4000Mhz and above have gradually become popular. variable.

However, at 4600MHz with extremely low Cas latency of only 19-26-26-45 like the Kingston FURY Renegade kit in today’s review, it is not too common, even when DDR5 is trying to replace DDR4. It is understandable because this is the most advanced RAM kit in the FURY Renegade RGB line, which is already Kingston’s most advanced RAM line. 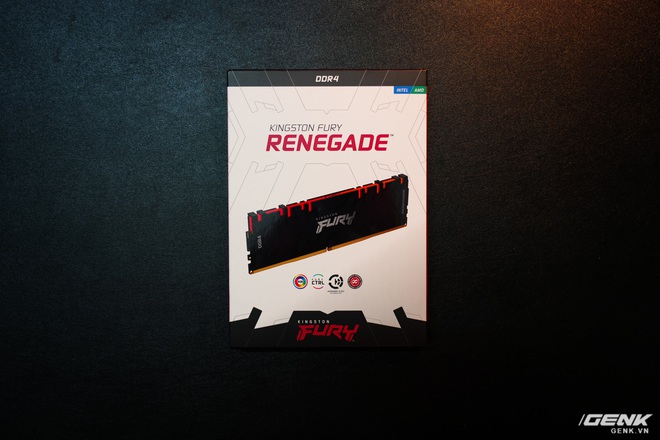 Like most other RAM kits on the market, the packaging of Kingston FURY Renegade RGB is quite simple and neat. The front of the box is the product name as well as some basic information about features such as compatibility with both Intel and AMD, the RGB Fury Control customization tool or infrared LED synchronization. 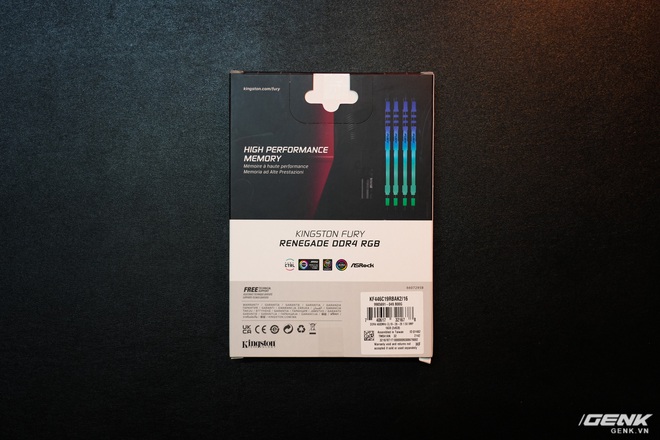 The back is an image of RAM when lighting up as well as compatible RGB sync technologies from mainboard manufacturers such as MSI, Gigabye, Asus, ASrock,… There are also product parameter stamps. A slightly different point in the packaging of Kingston compared to other memory manufacturers is that there is no cutout on the box to reveal the information stamp of each RAM stick in the kit or the actual image inside.

Opening the box, there is nothing too special inside with 2 sticks of RAM, a user manual and a Kingston FURY sticker for users to stick on the case. 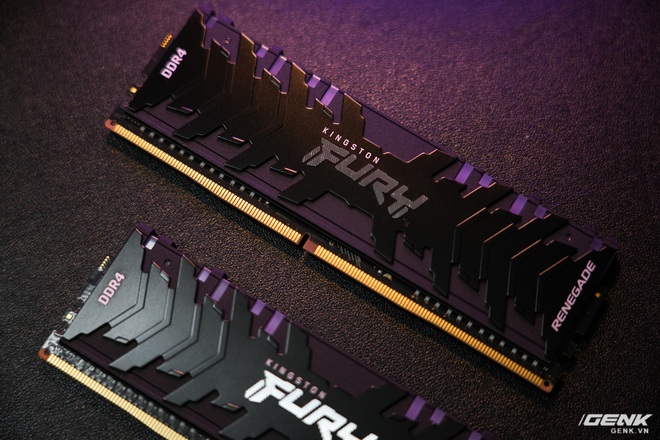 The heatsink of the Kingston FURY Renegade RGB has a dominant color tone of black with embossed lines following the design language of the Kingston FURY brand. The FURY logo part is also prioritized with a striped metal pattern to increase the aesthetic effect. Also included are basic information such as DDR4 and the Renegade series name.

Above is an RGB LED light bar with the FURY logo. To compare with the most advanced line of other RAM brands, this LED part of the Kingston FURY Renegade is quite modest, but for the team that likes to “hide”, this is one of the good choices. 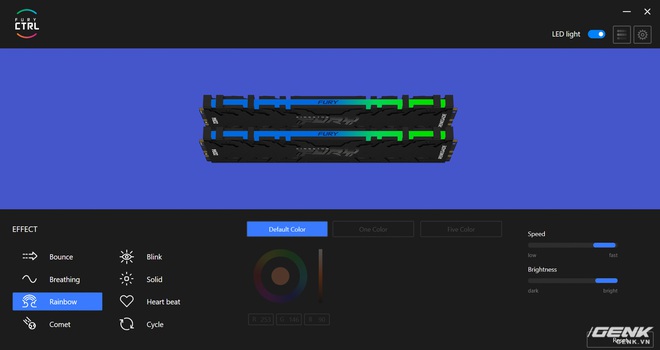 Users can download the FURY CTRL software through the Windows Store to customize the LED color as well as the speed, brightness, and display modes of the lights.

In terms of performance, the fact that using RAM above 3200MHz, especially with Intel systems, is quite redundant. However, we will still try to compare to see if the use of extreme RAM helps the Kingston FURY Renegade RGB 4600MHz CL19 outperform its Kingston FURY RGB 3200MHz CL16 brother. 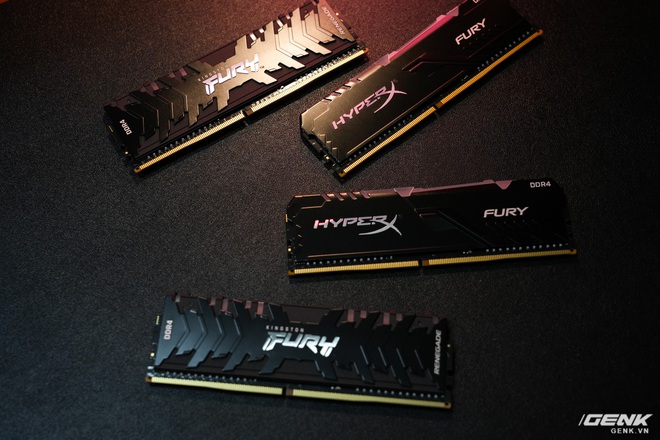 In the simplest test with AIDA64, it can be seen that the bandwidth of the FURY Renegade 4600MHz is superior to its FURY 3200MHz brother. Thanks to the low Cas latency, the read / write latency or access to the L Cache is almost the same.

However, in the PCMark10 test, we saw the score of the 3200MHz RAM kit that is slightly better than the 4600MHz kit. This can be explained by the fact that PCMark does not really optimize the RAM tests with too high a clock speed. This will also be a common situation with many applications, especially when running on Intel systems because as mentioned above, using RAM above 3200MHz is basically quite redundant.

Quick test with Assassin’s Creeds Valhalla game, the FPS scores are almost the same. Although the FURY Renegade 4600MHz gives higher average, min and max frames, the difference is less than 1% and is fundamentally disproportionate to the difference in RAM clocks.

To conclude, the Kingston FURY Renegade RGB 4600MHz CL19 is still an impressive RAM kit in terms of performance, especially for those with memory bandwidth needs, needing to handle large files on RAM such as 3D design files or Edit large photos and videos. Even if there is a bit of excess in terms of performance, if your need is the ultimate performance on all your components, a RAM kit clocked at 4600MHz like the Kingston FURY Renegade RGB or higher will still be an option. bright.