Recently, Anton Nell, programmer of blockchain platform Fantom said that he and his partner Andre Cronje will stop dedicating to the development of decentralized finance (DeFi). Anton also shared on Twitter that 25 projects or services in the DeFi field that he and Andre Cronje participated in developing will stop working from April 3.

The decision to “retire” two pillars of the DeFi industry was foretold, after Andre Cronje deleted his Twitter account and updated on the Linkedin platform that he was no longer an advisor to the Fantom Foundation. The “working” status line has been officially removed by Andre since February 2022 for a series of Yearn Finance, CryptoBriefing, Fantom and Ethereum projects. Keep3r is the only project Andre still maintains “working” status. However, this former programmer also said that he will soon leave Keep3r after handing over the work.

Despite receiving this warning signal before, the cryptocurrency market after Anton Nell’s announcement still shook violently. The price of Solidly, an automated matching market maker (AMM) company plunged as much as 75% during the session. Automation platform Keep3r is also down 25%, while lending platform Iron Bank is down 50%. All are projects founded by Cronje. Yearn Finance (YFI) also turned around and was in the red.

Similarly, most of the digital currencies of the Fantom ecosystem also recorded negative developments. Spookyswap (BOO) is down 19%, LiquidDriver (LQDR) 17%, Tomb 22% (TOMB) and Geist Finance (GEIST) 15%, despite the fact that they are not related to the projects Anton and Andre developed.

According to DeFi Llama, TVL, the index commonly used to evaluate the potential of Fantom’s projects has dropped 14% since March 3. The price of FTM coin has also lost 14% of its value since the news about the two former programmers was announced. 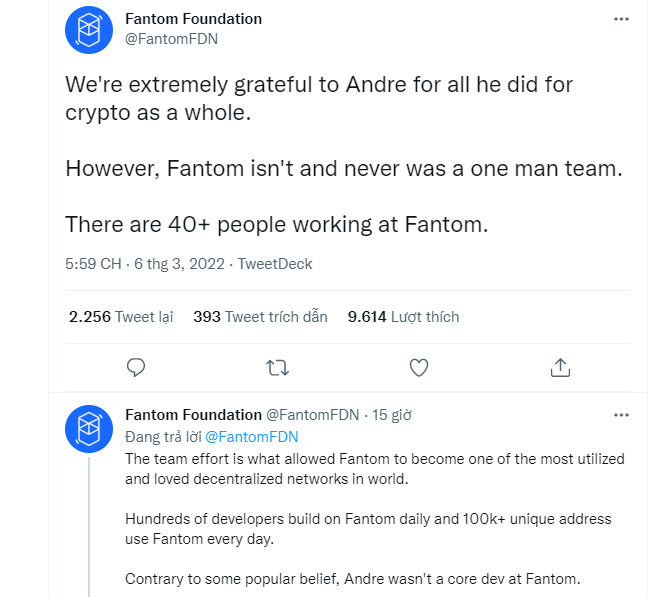 Statement on the Twitter page of the Fantom Foundation, the organization that manages the Fantom blockchain platform.

The Twitter page of the Fantom Foundation, the organization that manages the Fantom blockchain platform, shortly after confirmed Andre Cronje was no longer a member of them, and expressed his appreciation for his contributions.

However, the organization also revealed that Andre is not a key programmer on the staff at Fantom. This is completely contrary to the beliefs of the digital currency community so far. “Fantom is and will never be a one-member organization. There are more than 40 programmers dedicated to Fantom”.

Before that, Andre was said to have had a bad relationship with DeFi. He regularly posts on his blog articles disparaging speculators, and at the same time mocking billions of dollars worth of projects.

Currently, Fantom has the 34th largest market capitalization in the market. It is a smart contract platform based on acyclic routing (DAG) technology that provides decentralized financial (DeFi) services to developers using tailor-made algorithms.