On this day 50 years ago, November 15, 1971, Intel released its famous 4004 processor. The introduction of this processor marked an important milestone for the modern computing era. Some of the core ideas from this processor are still used today in various parts of the tech world.

Without this chip, we might still be playing cards or using pigeons, instead of high-end handheld graphic game consoles and email.

The 4004 chip was the first commercial microprocessor and certainly one of the pioneers of today’s technology. It combined many different functions into a single semiconductor chip with a higher clock frequency and transistor density than anything available at the time. It was also produced on the most advanced technological lines at that time. 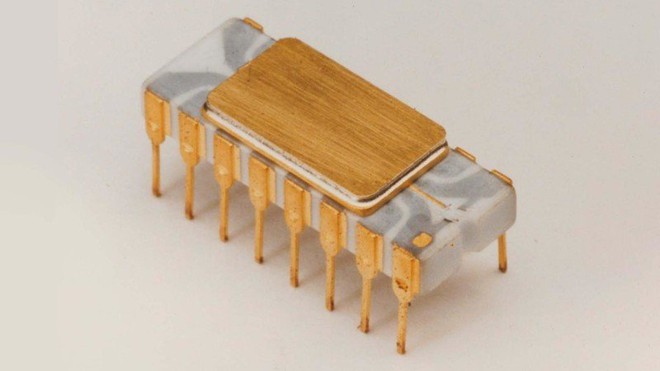 Prior to 1971, Intel was primarily focused on semiconductor memories and did not have much expertise in manufacturing general-purpose processors. In 1969, Nippon Calculating Machine Corporation approached Intel to design a processor for their Busicom 141-PF printing computer.

Intel then came up with four different chip designs, one of which could be programmed for a variety of tasks. Since then, the electronic computer industry has started a new page. To meet these design goals, they hired Italian chip designer Fredrico Faggin. Without a doubt, Faggin’s expertise has helped Intel reach the dominant position over the years. It seems to pay tribute to this, in the 4004 die chip, there are two letters FF in the corner. 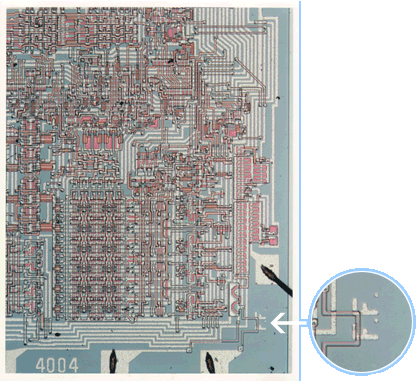 Two tiny letters FF are inside the die of each 4004 chip, you have to remove the outer cover to see it

“The 4004 chip was so revolutionary that it took Intel five years to train engineers on how to build new products based on those processors.,” said co-creator Stan Mazor.In the end Intel has been very successful on this journey and the rest is history.”

A few notable parameters of the 4004 at the time: 740 KHz clock speed, 10 micrometers (10,000 nm) manufacturing process and a total of 2,300 transistors. If you look back at today’s modern CPUs with a clock speed of about 4.5 GHz, manufactured using the 7nm process and containing billions of transistors inside, you will imagine how far the computing industry has come. in the past 50 years.

The technology and experience Intel gained from designing these early chips eventually led to the release of the 8086 processor in 1978, which was used in IBM’s first PC computer. From here, the modern PC computer was born. That is the fruit of many technological revolutions that we are inheriting today.