There are accidents where sometimes we don’t know whether to release “sad” or “haha” and this is such an accident. An elderly man in the Philippines was seriously bitten by a crocodile when he climbed into the lake to take a selfie with it, notably, he said he thought the crocodile was a plastic display for beauty.

During a visit to Amaya View amusement park in Cagayan de Oro city, Philippines, on November 10 to celebrate his birthday with his family, 68-year-old Nehemias Chipada spotted what he believes to be a model-like pattern. real crocodile. He decided to climb down to take a selfie with this “model” and didn’t realize this 3.5m-long crocodile was “real” until he got close enough to… pat it on the head and then bite his hand. . 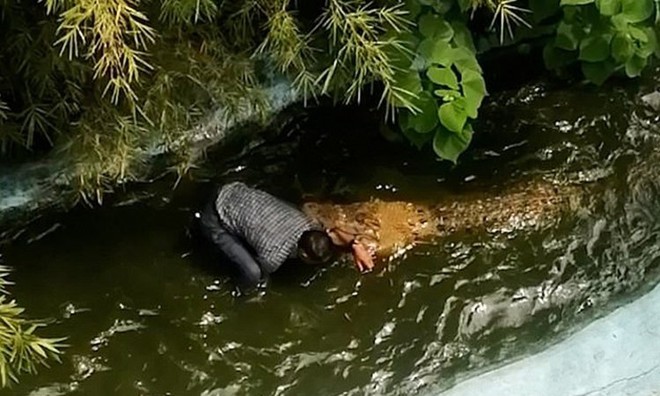 The video shows Nehemias screaming in panic as the crocodile tries to drag him into the water. Fortunately, he was able to free himself in the end, but was seriously injured. A nurse said he had to undergo many surgeries. According to hospital sources, the man had broken bones, eight wounds on his arm and thigh that needed stitches and even had an alligator fang stuck into his flesh.

Nehemias’ daughter, Mercy Joy Chipada, said: “There are no signs warning not to enter this area. If there were, we would never have gone there.”

The theme park agreed to pay for Nehemias’ treatment, but the park representative said the area where the crocodile attack occurred was in a no-go zone.

“We disagree with the allegation that the park was negligent,” Amaya View CEO Candy Unabia said. “It’s a restricted area. There are signs and constant reminders from our guides.”

Nehemias Chipada and his family decided not to sue the amusement park after the two sides reached an agreement.