Late last month, Elon Musk challenged the United Nations authorities to show him transparently and publicly how $6 billion can solve hunger. If that is done, he will sell Tesla stock immediately and do it.

The United Nations’ food assistance arm, the World Food Program (WFP), has laid out how an investment of $6.6 billion could prevent 42 million people across 43 countries from starving to death. The head of WFP, David Beasley, directly named Musk, the richest person in the world at the moment, in a tweet announcing the proposal.

“This famine crisis is urgent, unprecedented, and avoidable. Elonmusk, you’ve asked for a clear and public plan. Here it is!”, Beasley said. “We’re open to talking to you – and anyone else – who can be serious about saving lives.” 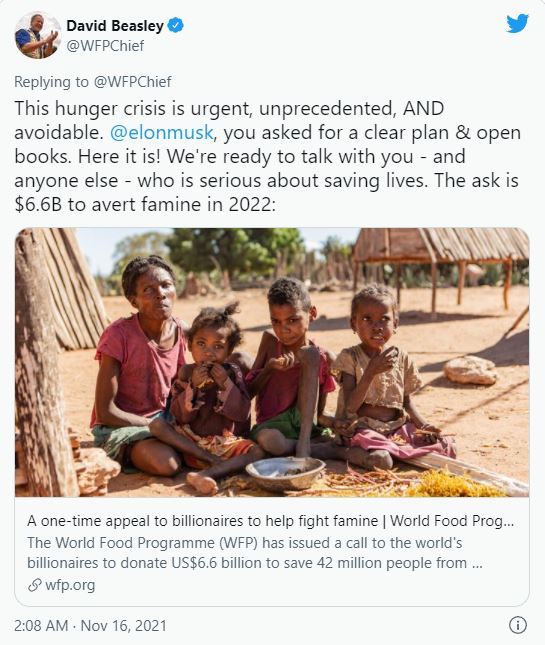 The WFP representative called on Elon Musk to spend money on the hunger rescue plan.

Elon Musk’s previous challenge came after a CNN interview with Beasley in which he urged billionaires like Musk and Amazon founder Jeff Bezos to spend $6 billion – a correspondingly small amount. with their huge wealth – to save millions of people at risk of starvation.

And now, the WFP proposal, titled “A Call for Billionaires Again,” describes how the money donated by the world’s richest people could be spent. More specifically, it includes spending $3.5 billion on food and delivery, and $2 billion on cash and food stamps, among other expenditures.