We know chemotherapy is now one of the main treatments available to many cancer patients. This method is done by infusing the patient with one or more drugs that inhibit and kill cancer cells.

The problem is that when the drug is injected into a patient’s bloodstream, it can travel throughout the body and cause damage to other healthy cells as well. That is why chemotherapy patients are often very weak, they experience hair loss, bleeding gums and many other unpleasant side effects.

Scientists have long wanted to develop targeted chemotherapy methods, with the ambition of delivering drugs to the right diseased cells. One idea is to create microscopic particles that can deliver drugs to a tumor and then release it.

Now, in an even bigger step, scientists have created fish-shaped microscopic robots. These fish can hold chemotherapy drugs in their mouths, swim to the location of the tumor, and then release the drug to kill cancer cells around it.

The new study was carried out by scientists Jiawen Li, Li Zhang, Dong Wu and colleagues at the National Laboratory for Microphysics in Hefei, China. In it, they use 4D micro-printers (devices that can print 3D objects but have the ability to transform).

These printers operate with lasers and operate on substrates that are pH-responsive hydrogen wafers. When hydrogen is in a neutral pH environment, it will remain inactive. But when the pH drops to low, such as in the acidic environment a cancerous tumor creates, the hydrogen moves to give the robot mechanical action.

Here, Chinese scientists have created fish-shaped microrobots that can open and close their mouths, crabs that can move their claws, and butterflies that can flap their wings. Then, they dipped them all into a solution of iron oxide nanoparticles to magnetize them.

The purpose is to control the direction of movement of these microrobots. In a proof-of-concept experiment, the scientists opened the mouth of a fish-shaped microrobot, loaded it with chemotherapy drug molecules, and dropped it into a petri dish.

In the petri dish, they created artificial blood vessels that mimic the patient’s body and then used a magnet to generate a magnetic field to direct their fish robot to swim in those blood vessels.

When the fish reached another area of ​​the petri dish containing cancer cells, the low pH there caused it to open its mouth, release chemotherapy drugs and kill the pathogen. 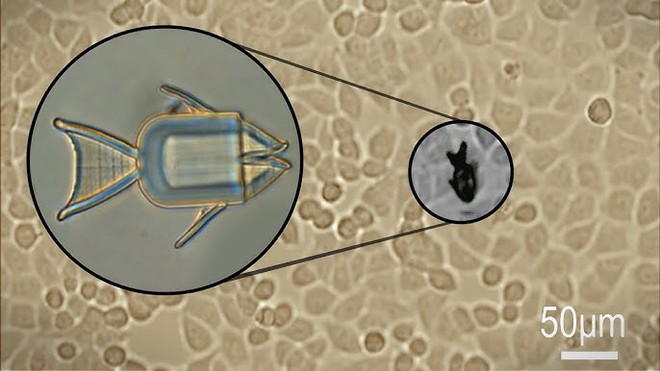 This is the first time that a microrobot measuring about 100 micrometers can perform such a complex task, the team said. However, to really apply this technology in humans, they say it will still need to shrink these fish robots even more.

In addition, we will also have to develop a technology that allows location tracking, or in other words, GPS positioning for these tiny robots in the body. That could be a method of taking high-resolution medical images, and giving results in real time.

Until then, these fish- and crab-shaped microrobots can really participate in the task of delivering drugs to human cancerous tumors. You will have a school of fish swimming through your veins, going where they need to go and releasing the drug molecules that need to be released.

Such a targeted chemotherapy approach could help cancer patients say goodbye to the dreaded side effects, even cure them of the disease.