Professor Richard Henry Friend, currently Professor of Physics at the University of Cambridge (UK) and Director of the Winton Program on Sustainable Physics of the Maxwell Center at Cambridge University, will come to Vietnam to participate in Science Week, in the series of events of the first VinFuture Awards, taking place from January 18 to 21, 2022 in Hanoi.

As one of the Chairman of the VinFuture Award Council – Professor Richard Henry Friend will share about the passion, achievements and sacrifices of scientists during the Exchange with the Awards Council and the Association. Preliminary Examination, taking place on the morning of January 18, 2022.

He is one of the most influential Physicists in the world with more than 20 patents, with 164,623 scientific citations in prestigious scientific publications in the World. In the 1990s, he first reported on the efficient operation of polymer-based FETs and LEDs, which contributed to the commercialization of OLED displays used in today’s TV and smartphone devices. .

He was honored at the Millennium Technology Prize – the prestigious Millennium Prize for the development of plastic electronics in 2010. He was knighted by the Queen of England for his “Contribution to the Physical Sciences” in 2003. . 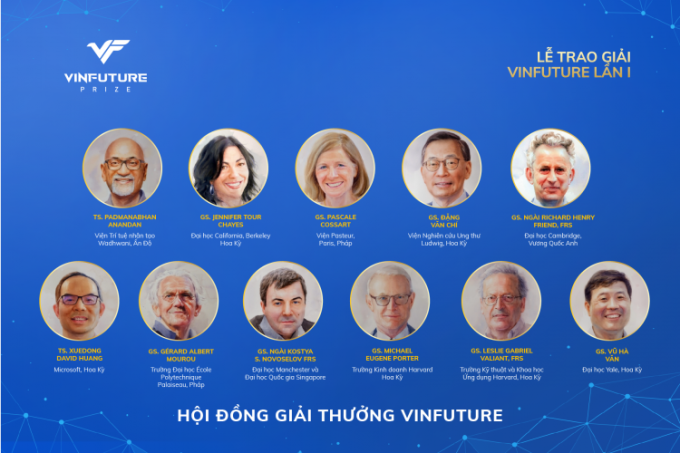 Along with Professor Richard Henry Friend, a series of other leading scientists in the world such as Professor Katalin Kariko – Senior Vice President of BioNTech, who laid the foundation for mRNA technology to make new generation vaccines in the fight against Covid-19; Professor Gérard Mourou – 2018 Nobel laureate in Physics for his invention of laser technology, creating high-intensity ultra-short optical pulses; Professor Dang Van Chi – Chairman of the Scientific Advisory Council of the National Cancer Institute of the United States of America is a cancer research scientist and a globally famous hematologist-oncologist or Dr. Omar M.Yaghi. Founding Director of the Berkeley Institute of Global Sciences and Co-Director of the Kavli Energy Nanoscience Institute and BASF’s California Research Alliance will also attend this series of events.

Scientists will attend the Seminar “Science for Life”, taking place on January 19, 2022 with 3 discussion sessions, each session will last for 90 minutes with the following topics: Future of Energy, The Future of Artificial Intelligence and the Future of Global Health – focus on trends, predicting important life changes with the strong participation of science and technology.

VinFuture Foundation has just announced the schedule of activities for Science Week, part of the first series of VinFuture Awards, taking place from January 18 to 21, 2022 in Hanoi.

The focal point of the series of events is the VinFuture Awards Ceremony held on the evening of January 20, 2022 at the Hanoi Opera House. In particular, the Ceremony will be held according to the most solemn ceremony with the witness of Vietnam’s State leaders and outstanding scientists, who are the owners of world-renowned scientific awards such as Nobel, Millennium Technology, Turing…