William D Cohan is a business writer. He got to experience the recently launched Rivian R1T electric pickup truck. With no engine and only a giant battery pack nestled beneath the cabin the author sat in, the electric car’s supercar-like acceleration left him awestruck.

The R1T is an electric vehicle with various conveniences such as an outdoor cooker that can be pulled out from within the vehicle. This electric pickup starts at $76,500. This product is a feat of electric vehicle technology and the culmination of the decades-long determination of so many.

Robert Joseph Scaringe, founder and CEO of electric vehicle maker Rivian, is known as “RJ” by more than 12,000 Rivian employees and close friends. The 39-year-old man has a muscular body and resembles the superhero character Clark Kent in both appearance and demeanor.

Scaringe really impressed the image of Superman with what he has achieved since starting Rivian in 2009.

Scaringe loves to conquer difficult challenges such as running marathons, climbing, hiking. But putting his more pushy side aside, Scaringe has also been described as “the anti-Elon Musk”. 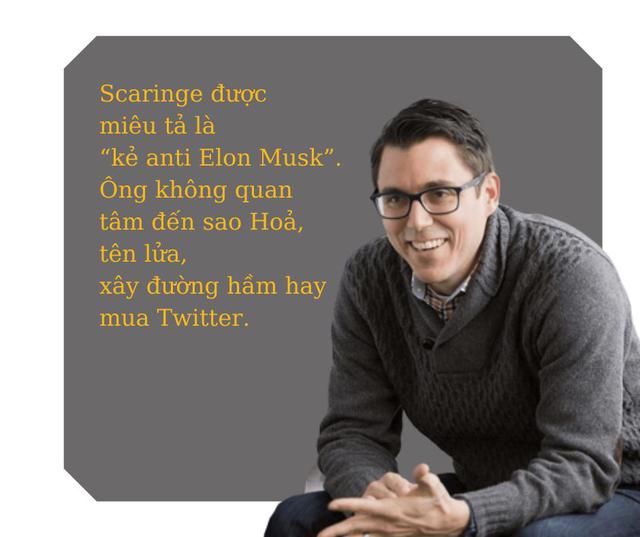 Thanks to one of the most successful IPOs in years after Facebook and Alibaba, his company raised $13.7 billion. Scaringe’s net worth at the time was about $530 million, much smaller than Elon Musk’s $265 billion.

Scaringe’s focus is on building vehicles that change the way people consume fossil fuels to combat climate change. He doesn’t care about Mars, rockets, tunneling or buying Twitter. He owns an account of more than 60,000 followers but is rarely active.

Hedge fund manager Dan Loeb, who invested in Rivian before the IPO, describes Scaringe as a serious guy living in the Midwest. “He’s thoughtful. Scaringe is completely different from impulsive people. Everything is planned and analyzed,” said Dan Loeb.

Scaringe grew up in the Atlantic coast area of ​​Florida. He started his own car company when he was 17 years old.

As a teenager, Scaringe began tinkering with cars and restoring them. As he got older, he realized that the internal combustion engine cars he loved were the main cause of serious problems like pollution, climate change and the war for oil.

During a family trip, Scaringe decided to devote herself to solving this problem. The original “raw idea” was to start a car company. He was in high school at the time and had no idea what that meant and how complicated it was.

At the time, he wasn’t sure which was the wiser approach between being hired and starting his own company. Because of impatience and a bit of innocence, Scaringe chose the path of independence. 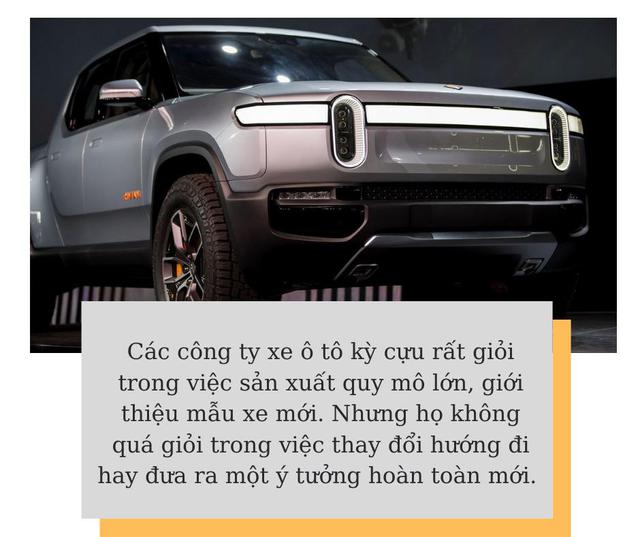 He decided to go to Massachusetts Institute of Technology (MIT) in Cambridge to get a master’s degree and then a doctorate in mechanical engineering at the school’s Sloan Automotive Laboratory.

At MIT, he realized that veteran auto companies were good at mass production, introducing new models and styles. But they’re not so good at changing direction or coming up with an entirely new idea.

“The bigger the change, the harder it is to apply,” he said. From changing doorknob designs to having an entire workforce focus on a new technology is a whole different level of complexity.

He studied a small car company with an electric motor. But after that summer, he gave up the idea. The young man that year realized he needed to build something that people wanted to own.

After receiving her PhD in 2009, Scaringe was once again faced with the decision of whether to work for an auto company or start her own. He knew that the probability of success when starting his own company was extremely low. But when weighed, Scaringe thinks that option is even more likely than changing an entire company when just finishing a PhD.

The time when the company was founded could not have been worse. After the 2008 financial crisis, both General Motors and Chrysler went bankrupt and were desperately waiting for federal aid. Ford escaped a similar fate by mortgaging all of its assets, including the logo, in exchange for a loan, shortly before the crisis hit.

For the next two years, Scaringe focused on creating a prototype of a new sports car that he could build a brand on, then introducing new products on the heels of the first model’s success. This is exactly the strategy that Elon Musk has applied to turn Tesla into a giant in the car manufacturing world.

Scaringe created a realistic car in the video but was unable to create it in reality. During those two years, Scaringe decided to abandon the project and start over. That’s when he got the idea for the R1T electric pickup. 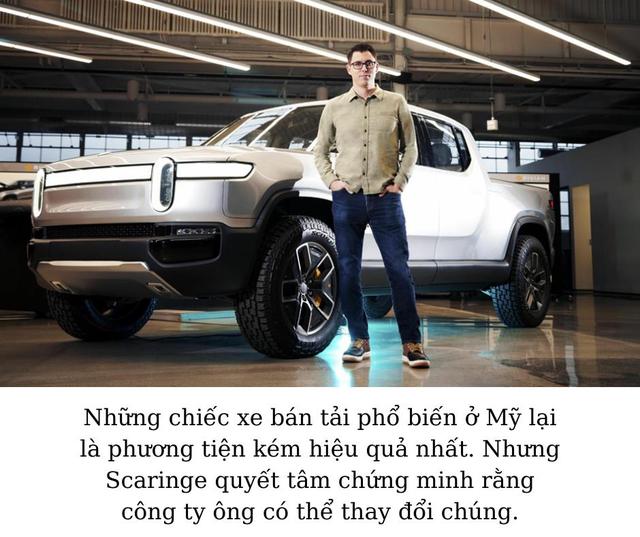 Pickup trucks are the most popular segment in the US, but are not really efficient when traveling on the road. Scaringe is determined to prove that his company can change them.

Scaringe has redesigned the classic pickup truck architecture and upgraded them for outdoor adventures. However, an electric pickup truck at that time was still too far away. Once again Scaringe was overwhelmed by the need for capital. When researching many problems, he realized that the amount of money he needed was not a few million, but billions of dollars.

Scaringe has raised billions of dollars for Rivian. In addition to the $13.7 billion Rivian raised in the IPO in November 2021, he also raised another $10.4 billion in equity in five rounds from February 2019 to January 2021.

When the capital was secured, Scaringe began to realize her dream. Rivian purchased the Normal plant in 2017 for $16.5 million from the shuttered company Diamond-Star Motors. In the early days, Scaringe and his father both mortgaged their houses to invest in Rivian. The billions of dollars in capital diluted Scaringe’s ownership of Rivian to less than 2%, even though he was granted the same options as Elon Musk.

The founder of Rivian also made many mistakes. Two months after the IPO, Rivian CEO Rod Copes announced he was stepping down. The news hit Rivian’s stock heavily. The company later said that the CEO’s resignation was planned before the IPO, but Scaringe admitted to poor management practices.

Then there was the sex discrimination lawsuit by former VP of marketing and sales Laura Schwab with Rivian before the IPO. About four months after Schwab was fired, Rivian faced its worst public relations disaster since its inception.

The company has announced an increase in the price of the R1T by 17%, or $12,000. More than 71,000 car pre-order customers worldwide were shocked. Rivian has been slow to deliver and is now renewing deals with customers, at a time when many car companies are advertising new electric vehicles.

Customers turned their backs in droves and took back their deposits. Scaringe was also shocked. It was his worst day as leader of Rivian. Two days later, the company restored the original price.

Perhaps, the spontaneous mistakes and the times “learned, redone” created the impressive IPO in history. Of course, Scaringe was still concerned when Musk announced that Tesla was working on creating its own pickup truck.

On the one hand, he was a proponent of competition, the race would be really boring if there was only one competitor. Tesla’s market value, on the other hand, is around $900 billion, while Rivian’s is down to about $30 billion.

In other words, Tesla is an extremely heavyweight in the electric pickup truck market. But when Musk announced the 2019 Cybertruck, Scaringe breathed a sigh of relief. 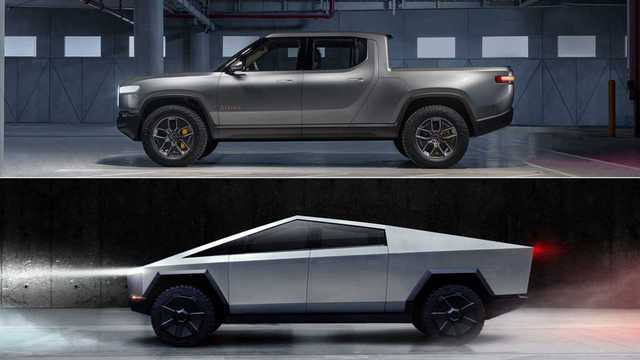 Rivian’s R1T (above) and Tesla’s Cybertruck (below).

In the end, the two automakers have only one small intersection: they’re both pickup trucks. However, Tesla’s car has angular lines, while Rivian’s car has softer curves.

When visiting the car factory, the author saw Scaringe choking on a “romantic” Rivian. Thousands of people work to turn steel coils into a means of transportation. The car will carry families to the beach, take couples on dates, bring a group of close friends together to climb mountains…

“It’s the culmination of years of dreaming and hard work. It’s romantic to think about what goes on in this factory,” Scaringe said.