Recently, according to Business Insider, Tesla CEO Elon Musk posted on Twitter a status line aimed at the administration of US President Joe Biden. The billionaire said that the Biden administration “did everything it could” to “ignore” Tesla, even though the company makes twice as many electric cars as the rest of the US auto industry.

Specifically, in an exchange with Pod Save America host Jon Favreau, Elon Musk shared about why he switched from supporting Democrats to Republicans.

“In the past, I voted for the Democrats, because they (mostly) represent kindness. However, after they have become the party of division and hatred, I can no longer support them. I will vote Republican. Look at what they are doing to criticize me!”, Elon Musk tweeted.

In response, Jon Favreau said: “Dude, if you want to side with climate denialists, that’s your job. Not sure that helps with the direction you and the staff are taking. whether you’re working hard to build it or not, but you’ll be famous on Twitter.”

Soon after, Elon Musk made his point. He asserted that the administration of President Joe Biden did everything to avoid and ignore Tesla, “even though we have made twice as many electric cars as the rest of the US auto industry.”

“I’m not the only one who’s turned to the Republican Party. Many other voters have done the same. We’ll see this trend in November,” said Elon Musk. 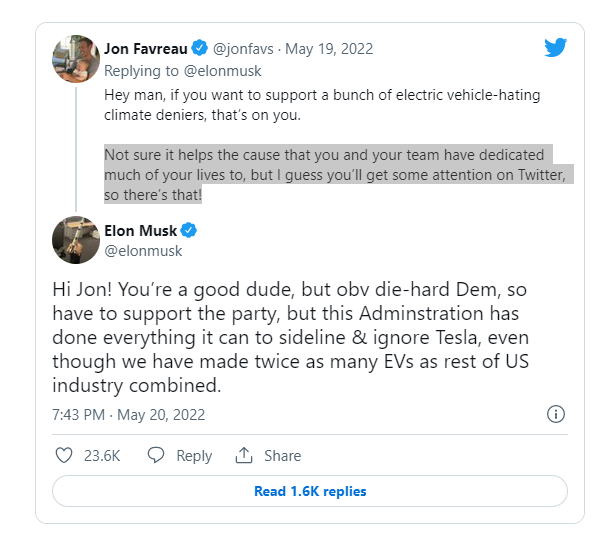 “I’m happy that the new administration is focused on climate,” Musk said.

However, over time, the billionaire began to criticize the Biden administration for not recognizing Tesla in its push to produce electric vehicles around the country. He called President Biden a “puppet” and said that this leader was “dominated by the union”, especially after the Joe Biden administration proposed a stimulus package for electric cars, but only applied to people who buy cars manufactured by unions.

Not only electric cars, billionaire Elon Musk’s space conquest is also ignored by President Joe Biden, even never publicly commenting on the company’s achievements as well as the astronauts. amateur.

It was not until early February 2022 that President Joe Biden publicly acknowledged Tesla’s position and role for the first time during his presidency, and said it was the largest electric vehicle manufacturer in the world. country.

“Since 2021, companies have invested a total of more than $200 billion in the manufacturing sector, including iconic corporations such as General Motors, Ford or Tesla, the country’s largest electric vehicle manufacturer. America,” Biden announced. 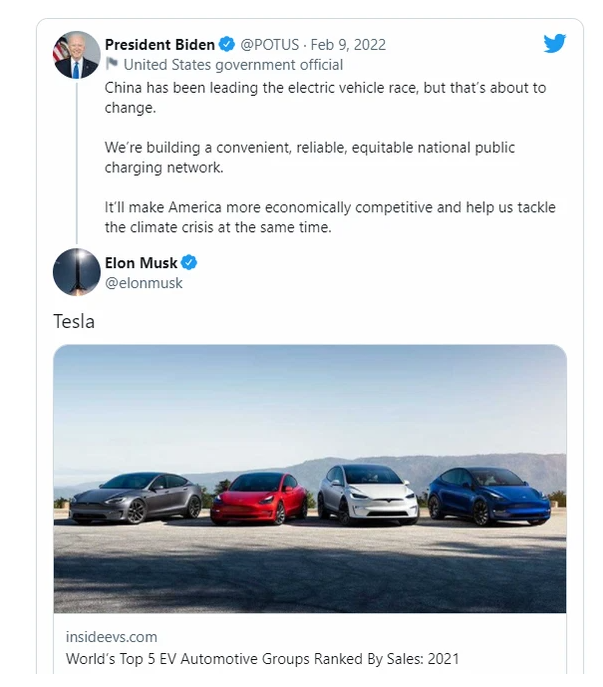 According to him, automakers like General Motors, Ford Motor, as well as smaller-cap electric vehicle companies like Rivian Automotive and Proterra need to follow Tesla’s lead and expand the US electric vehicle infrastructure.

However, perhaps the above speech was not enough to “appease” Tesla after a long time of being “ignored”. The richest billionaire on the planet must still be upset because his electric cars do not win much recognition.

According to: Business Insider