In a collection at the Pennsylvania Academy of Fine Arts in Philadelphia is an oil painting of a red-haired blacksmith titled “Pat Lyon at the Forge”. Pat Lyon – the red-haired blacksmith, is the one who hired the artist to paint this picture. It is worth noting that in 1892, a manual worker could not afford to do so. 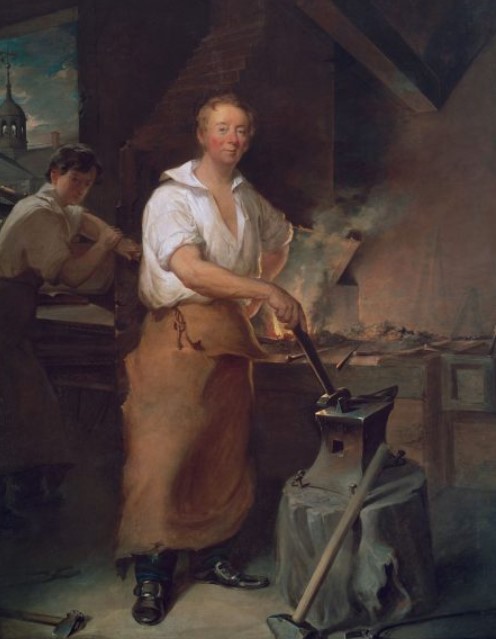 The famous painting “Pat Lyon at the Forge” (Photo: Internet).

Some people joke that only robbing a bank (bank) can make them rich quickly. Lyon’s case is both wrong and right with this joke. The story behind the portrait of Lyon is one of the most remarkable events in American history because it involves the first bank robbery in the country of flags.

Founded in 1793 in Philadelphia, the Bank of Pennsylvania was one of the largest banks in America at the time. In 1798, something shocking happened: $162,821 (equivalent to millions of dollars today) was stolen from the safe of the Bank of Pennsylvania, located in the Carpenter’s Hall. According to investigators, the incident likely took place on the evening of August 31 or the morning of September 1, 1798.

Except technically, there was no sign of a break-in and no one was threatened with force. Thus, surely the criminal has a helping hand. Reportedly, the Bank of Pennsylvania recently moved its headquarters into the Carpenter’s Lobby and changed the lock for the safe to protect the money.

The maker of these locks is Pat Lyon – a famous 29-year-old blacksmith. He was the one who manually installed new locks for the safes and confirmed that no one would be able to open them unless he had the “original” key.

With the result that the “impregnable” safes were empty, an investigation was immediately opened, targeting the top suspect, Lyon. The irony, however, was that Lyon had the perfect alibi: He was in Delaware, 150 miles from Philadelphia on the night of the theft.

In the summer of 1798, a deadly yellow fever epidemic swept Philadelphia, sending thousands, including Lyon and his young apprentice, to Delaware to settle. When the two arrived in Delaware, Lyon’s apprentice died of an infection.

This is not the only shocking news for Lyon. A few days later, he heard about the loss of money at the Bank of Pennsylvania, where the vault door was the last job he completed before leaving Philadelphia.

Because of not committing the above misconduct, Lyon immediately became suspicious of carpenter Samuel Robinson – who was hired by the bank to oversee the move of headquarters into the Carpenter’s Lobby. Before the theft happened, Lyon remembered that Robinson had brought a stranger to his blacksmith shop while he was reinforcing the safe.

Despite the danger of the epidemic, Lyon rushed back to Philadelphia to clarify and report Robinson’s suspicious actions. However, no one believed his story, his alibi was denied and he was sent to the city prison. Lyon is accused of minting a set of extra keys when making a lock and using it to steal $162,821.

During 3 months in prison, Lyon had a mental breakdown, rapid weight loss, and shaggy beard. He might have been there longer if the real thief – Isaac Davis hadn’t done something incredibly stupid: deposited the stolen money in his own bank.

Davis is the stranger who accompanied Robinson to Lyon’s smithy. His accomplice was Thomas Cunningham – an employee of the Bank of Pennsylvania. The night of the burglary, Cunningham got the keys and slept over in the Carpenter’s Hall.

When asked about the suspicious deposit, Davis immediately confessed. Surprisingly, he did not spend a day in prison because of the promise of pardon if cooperated and returned the stolen money.

This made Lyon extremely angry because he was unjustly imprisoned and did not receive any apology. A year later, he published a book recounting his unforgettable experience. The book quickly gained a lot of attention. Some talented lawyers even helped Lyon sue the authorities for the injustice he had to endure.

The judge jailed Lyon, setting bail of up to $150,000. After Davis pleaded guilty, this amount of bail was reduced to $2,000. Lyon was cleared of all charges in early January 1799.

Joseph Hopkinson, one of the brightest lawyers in the US law at the time, argued: “Instead of releasing Mr. Lyon and apologizing, they still executed the sentence with him as an accomplice.” After a period of deliberation, the trial panel announced a compensation of $ 12,000 for Lyon. In the end, the compensation was renegotiated by the parties, reduced to 9,000 USD.

Anyway, at that time, this was not a small amount of money, helping Lyon to lay the foundation for a new business and have money to hire an artist to paint a famous portrait.