Not long ago, Lei Jun – founder and CEO of Xiaomi said on the Chinese social network Weibo that the company will especially focus on the high-end segment of the global smartphone market.

The goal is to go head-to-head with Apple, trying to fill the void left by Huawei. If you remember, Huawei was the only company that for many years kept Apple behind and even came close to becoming the world’s top smartphone maker. It was once China’s largest smartphone supplier, until the US ban and its effects forced the company to pull back from some areas. Although the brand still exists, it is only a shadow of its glory days. 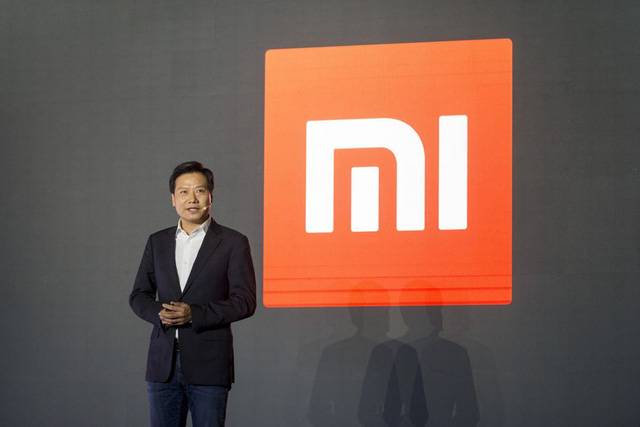 It can be said that Xiaomi did not “explode” when making such an eloquent statement. With strong growth, this brand has been dubbed the “Apple of China”.

Besides, a few years ago, Chinese phone brands didn’t need to worry too much about foreign brands trying to gain popularity in the country. Samsung, Apple have never surpassed them in terms of sales and popularity. However, recent numbers tell us a different story.

According to data site Counterpoint, sales in the third quarter of 2021 of the “half-eaten apple” brand accounted for only about 12% of the market share in the Chinese market. However, the situation has reversed when this brand accelerated spectacularly in the fourth quarter, rising to the top position with sales accounting for 22% of the market. 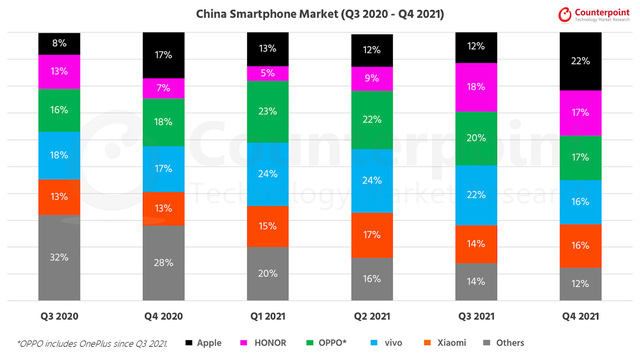 Market share of smartphone brands in the Chinese market

This result was achieved by the launch of the iPhone 13 series in September and the start of sales around October. In 2020, Apple’s sales were postponed due to the impact of the Covid-19 pandemic, causing sales to fall. of the affected company. However, in 2021, everything is gradually working smoothly and Apple has not missed this moment to try to increase sales with the new product line.

Meanwhile, Chinese smartphone brands such as Oppo, Vivo, Xiaomi and Honor saw a significant gap in the fourth quarter of 2021 when recording market shares between 16 and 17%.

The most surprising is Honor, as the company has quickly become one of the major brands in China. This result is achieved because it benefits from the legacy of parent company Huawei, but is not involved in the problems Huawei is dealing with. The proof is that while Honor shines, we can’t even see Huawei in the top 4 in the domestic market.

Meanwhile, Xiaomi’s sales ranked only fourth, a bad position for a company that wants to dethrone Apple.

We don’t yet know how things will play out towards the end of the first quarter of this year. Xiaomi recently launched its Xiaomi 12 series in China. Meanwhile, Apple will continue to see positive numbers from its iPhone 13 line. Things will probably get more exciting in the second quarter, when the “half-eaten apple” brand will launch iPhone SE + 5G / iPhone SE 3, a low-cost iPhone using the A15 Bionic chip and connectivity. 5g network similar to high-end line. The device could become a huge hit in China.