In motorsports, if you’re not moving forward, you’re going backward. And that’s especially the case when it comes to race series maintaining relevancy and meaning in the rapidly changing wider world they exist in.

For RACER No. 313, our annual Technology Issue, we’re taking a look at several series introducing new cars, new rules and new thinking to “get with the program” on real-world concerns over sustainability, the environment, and the need to make future automobiles part of the solution, rather than a significant part of the problem.

In some cases, such as IMSA’s new-for-2023 headlining LMDh prototype class and the FIA World Rally Championship’s incoming Rally1 machines, a switch to hybrid-powered cars is seen as an opportunity for auto makers to showcase and develop road-car technologies. Add sustainable fuels and carbon-neutral race environments to the mix, and this is racing doing what it’s always done best, if given the opportunity: accelerating the rate of learning, and putting technologies through the ultimate stress test.

For other championships, such as FIA World Rallycross and the already-active Extreme E and Formula E series, all-electric is the chosen path. Critics may argue they only demonstrate the current limitations of battery power, but they are a potent platform to work on reducing and overcoming those shortcomings.

Formula 1 has been hybrid powered since 2014. Its turbo-hybrid power units, which recover kinetic and heat energy, are the most efficient ever built. The science and engineering, especially on the heat-recovery side, may be arcane and massively complex, but that’s how many leading-edge technologies begin.

F1 is reinventing itself, starting with the 2022 cars we put the spotlight on, but it shouldn’t be at the expense of progress made. Plans to ditch heat recovery for its next-gen engines may be based on cost, yet the signals it sends on F1’s commitment to being part of the solution are mixed at best.

NASCAR isn’t going the hybrid or all-electric route just yet, but it is moving its Cup Series machinery closer to current street-car thinking with the Next Gen Car. It’s a major departure for a sanctioning body whose mantra when it comes to tech has always been “If it ain’t broke, don’t fix it,” and in just a few weeks from now, we’ll start to see what it delivers.

Click here to purchase the new issue of RACER, and check out the gallery below for a preview of what’s inside. Interested in having RACER delivered to your mailbox?  Click here to find out more about print and digital subscriptions. 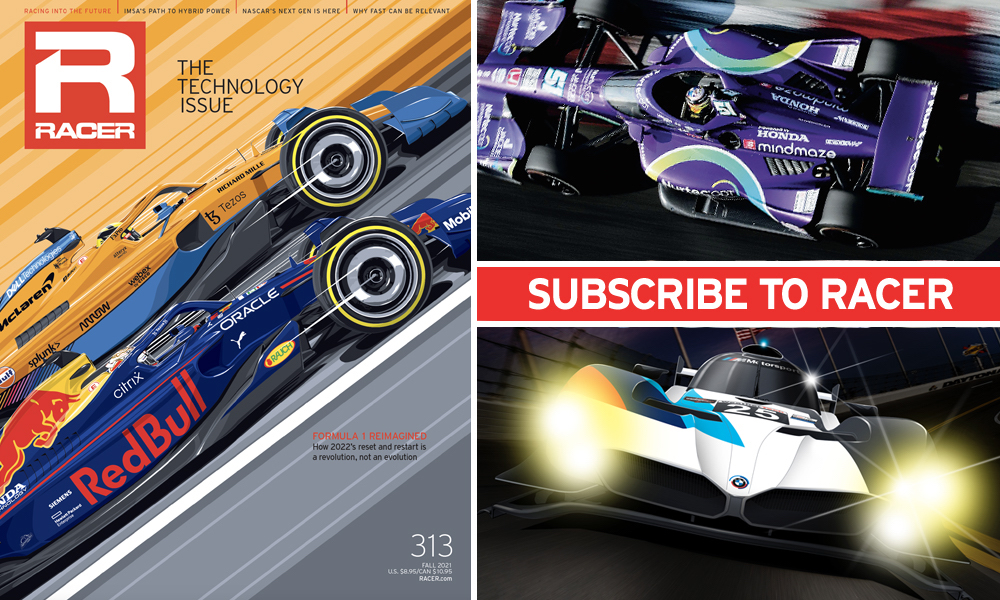