This is the first time the President of a large telecommunications company in Vietnam like FPT Telecom has personally appeared on the livestream to sell goods. With the companion of GS Rot – Dinh Tien Dung, President Tien’s livestream attracted more than 5,800 likes, 2,000 comments and 1,800 shares within just 60 minutes.

Although he was quite nervous when he first livestreamed the sale, President Tien quickly made an impression on the online community with his charming leadership, witty story-telling talent and top-notch closing performance.

“Just drop 1 packet of sesame sticky rice, your child will be safe online for a whole month” 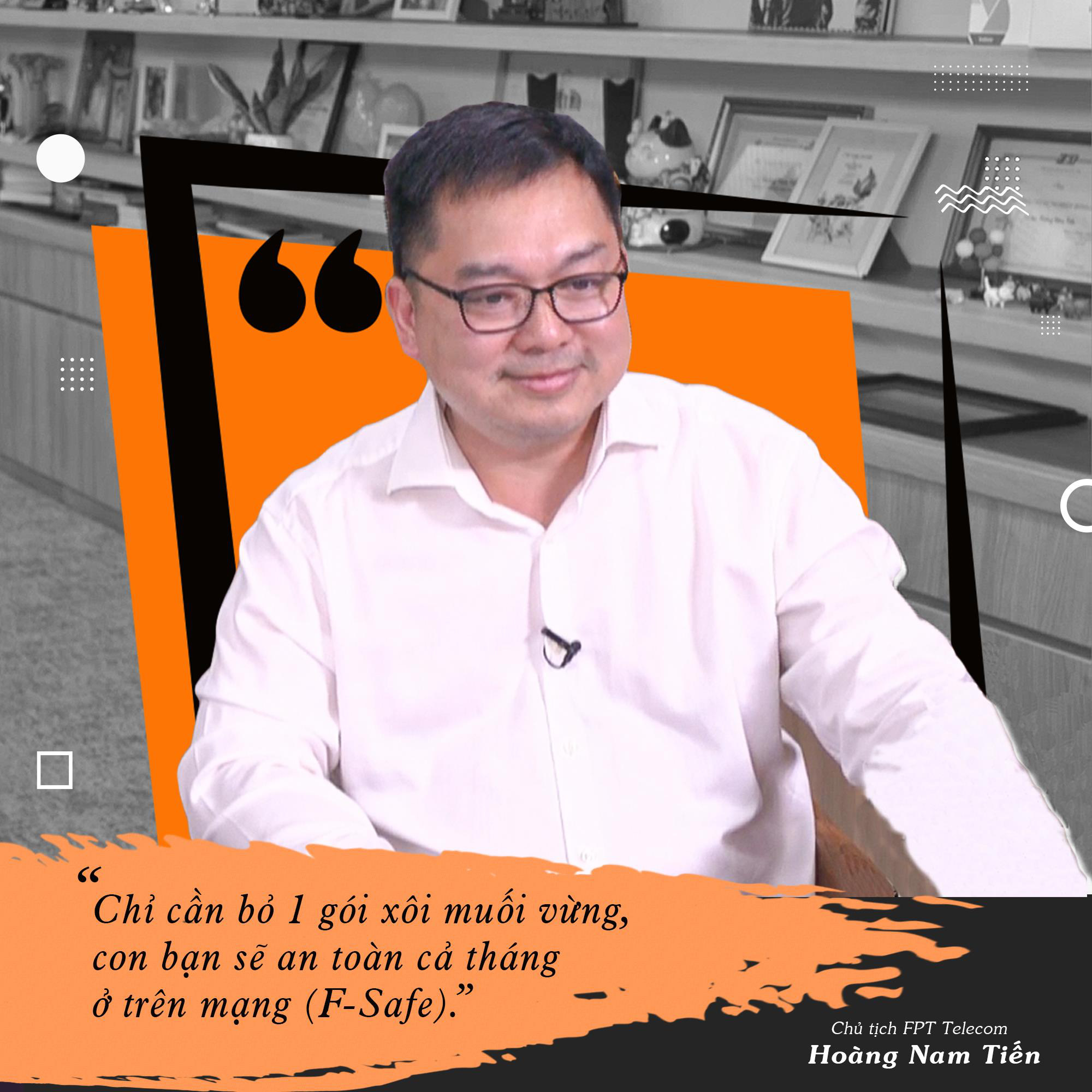 That was the brief “offer” of Chairman Tien when he introduced the F-Safe security feature developed by FPT Telecom and integrated automatically on FPT Internet service. From the real story, many Vietnamese families have difficulty and worry for their children to study online during the epidemic season, or easily access the dark web that parents cannot control. President Tien gives advice, just spend 10 thousand VND per month with F-Safe with exactly 1 pack of sesame sticky rice, parents can rest assured that their children can surf the web safely.

Affirming that he is still a gamer on the livestream, President Hoang Nam Tien and GS. Cu Trong Rot is excited to share the games they are passionate about.

However, it turned out that this was the “trick” of advertising the respectable story of the “matching card pair” when it hit the needs of gamers for internet speed. The end of the story is the “launching” of a new Internet service, FGame, exclusively for gamers, developed by FPT Telecom. 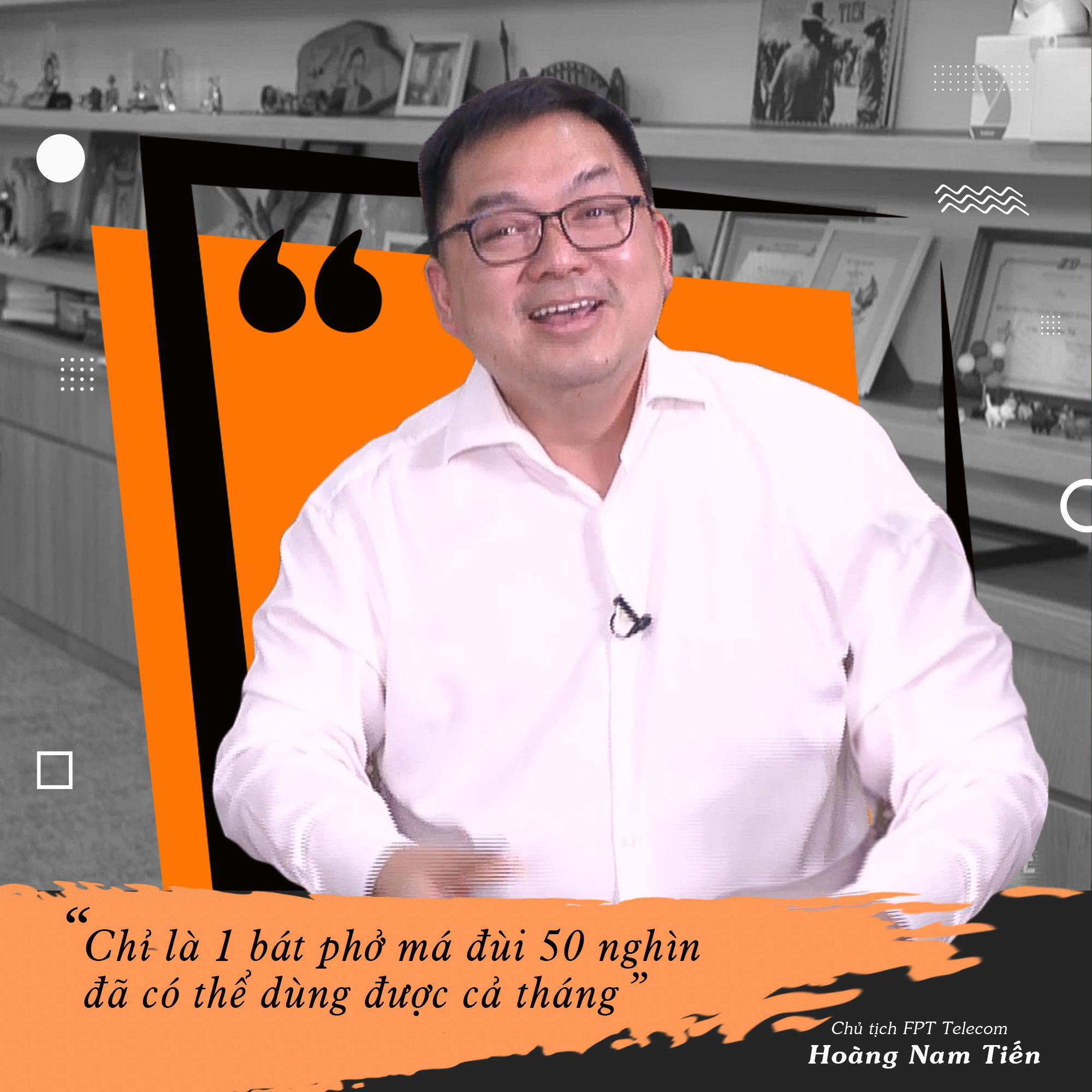 Chairman Tien did not hesitate to advertise an attractive price “only with a bowl of pho noodle with thighs of 50,000 VND, used for a whole month”. Gamers will immediately have a smooth connection speed, even if the game server is on the other side of the world.

“One month of our FPT Camera cloud package is equal to a bowl of vermicelli noodles. But that’s only 35,000 VND.” 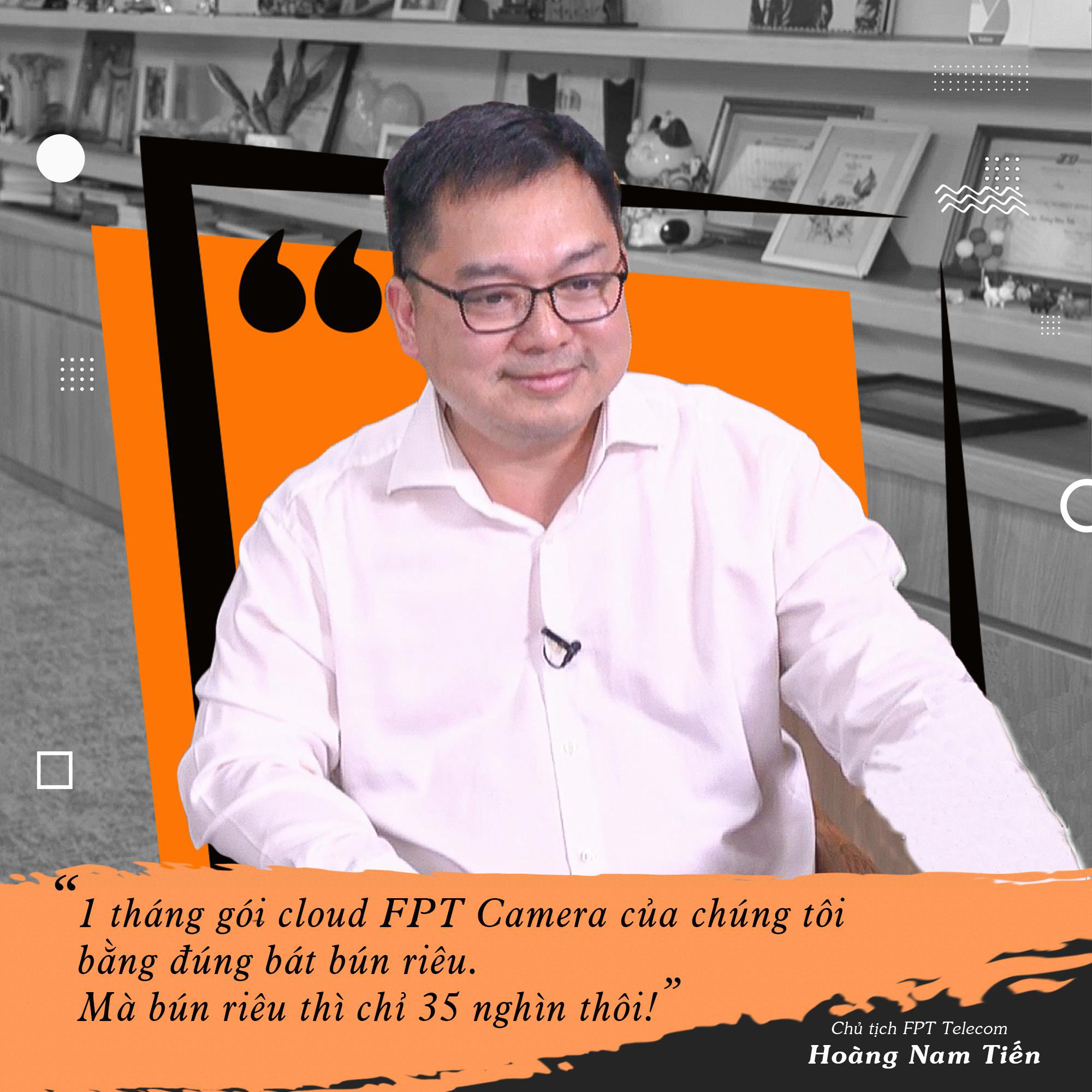 When introducing the “home-made” camera storage service, President Tien stated that just a bowl of vermicelli noodles costs 35,000 VND. With this attractive ‘offer’, many viewers excitedly commented and placed orders for the Chairman.

“FPT Camera can even beat thieves”

Many viewers have continuously dropped their hearts and enjoyed the introduction of FPT Camera product by President Tien on the livestream. Even more, the story is leveled up with a more physical juggling with GS Rot about the story of “wretchedly crying and laughing” when friends had a situation of ‘installing a camera but still having to guard’. 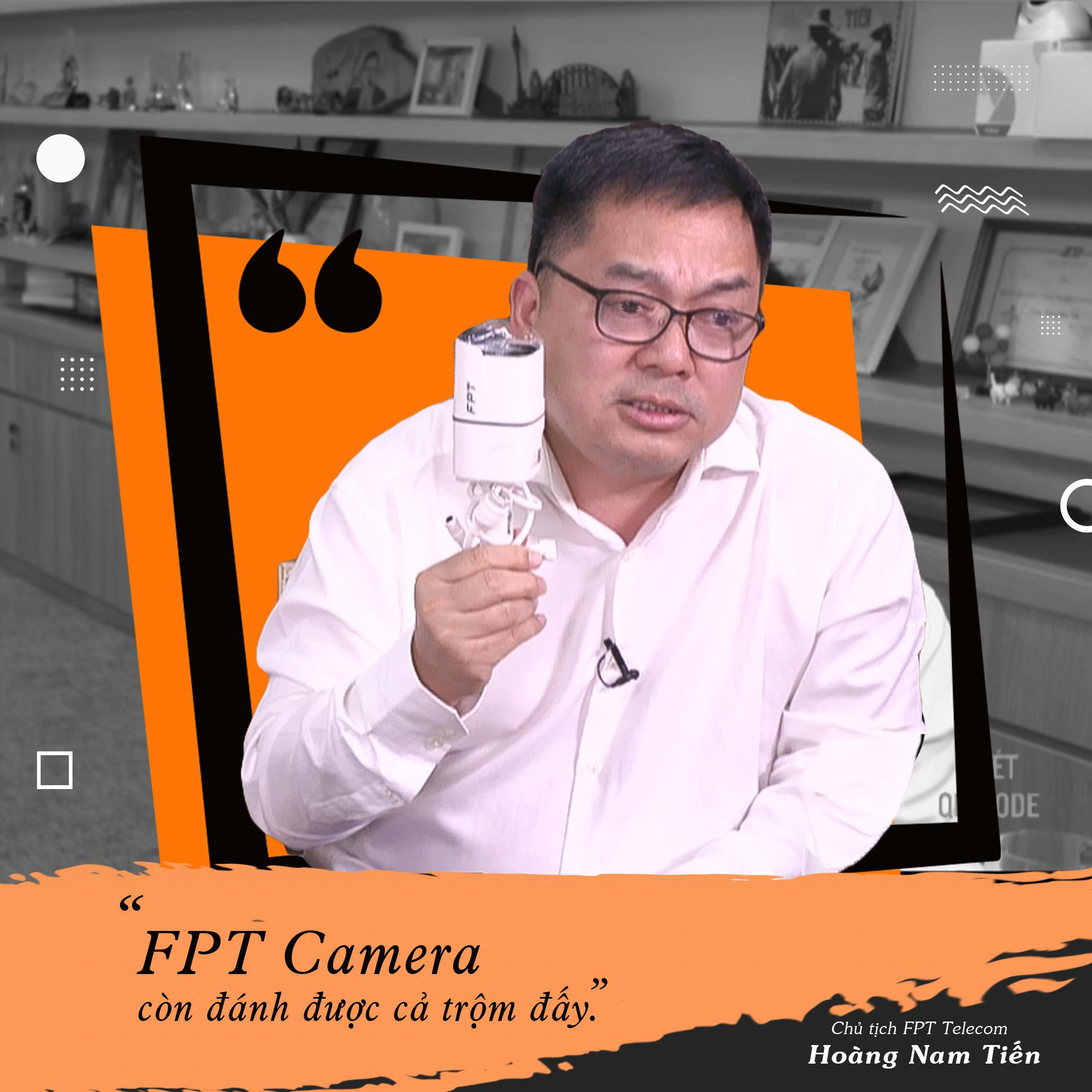 Immediately, Chairman Tien “offered” with an introduction that could not be more attractive. With the FPT Camera IQ device, Chairman Tien affirmed, users can rest assured with the ability to intelligently identify by distinguishing human and object movements. At the same time, you can rest assured because the image data will be stored by Cloud at the largest Data Center in Vietnam owned by FPT Telecom.

Besides the impressive product advertisements, President Tien also affirmed the goal of the first sales livestream in his life: “We not only sell products, we also sell wholeheartedly and wholeheartedly to customers. row.” 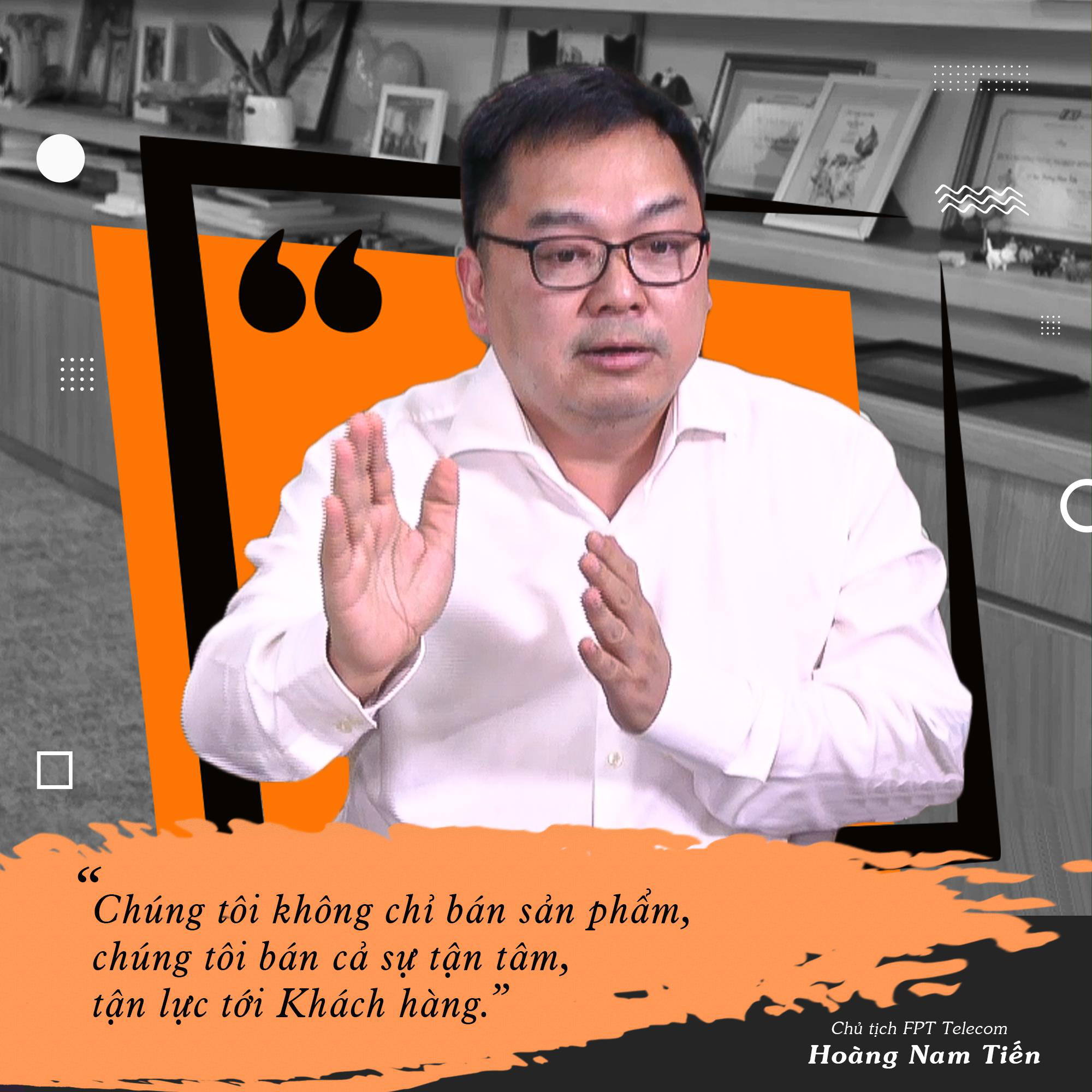 During the livestream, many viewers enjoyed leaving comments: “Boss Tien livestream came back like a flood”, “The livestream is so good”… Even, many people left their phone numbers to support and do not hesitate to give points for the ability to “close the order” of the president.

It can be seen that, with the experience of a veteran businessman, who is also the leader of a large telecommunications business, President Hoang Nam Tien does not need to use fancy words to still make livestream followers feel close and realistic. and rightly touch their ‘pain’.