In an interview with the Financial Times a few days after being named “Person of the Year” by TIME, Elon Musk said he wanted to be generous with his critics. But after years of battling an ever-doubting mob in the auto industry and on Wall Street, it’s hard to contain the frustrations of the Tesla chief executive.

It’s been almost a decade since Tesla’s Model S electric vehicle proved that electric cars can compete with the best in style and performance. It’s also been four years since the Model 3 brought the technology to the wider market. During those years, Musk not only had to build a near-lone EV market, struggling to avoid bankruptcy, he also had to contend with Wall Street short sellers and even wrangling with regulators. physical.

This year’s developments have partly vindicated Elon Musk, as companies from Ford to Volkswagen to Mercedes-Benz are clearly committed to their future in electric vehicles. Toyota becomes the newest company on the list, announcing a $35 billion investment in electric vehicle construction on Tuesday.

“For a long time, the rest of the auto industry basically called Tesla and I idiots and scammers.“, Musk said in an interview with the Financial Times.”They say electric cars will yield nothing, both in terms of range and performance. They insisted that even if I did, no one would buy a car“. 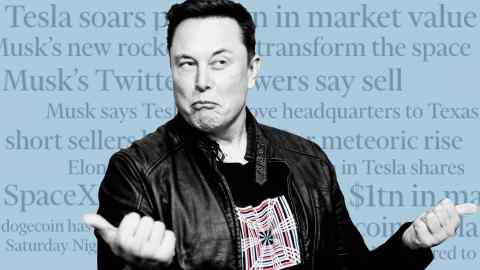 This year, Elon Musk has stirred up everywhere, but in some ways is one of the most controversial figures in recent times.

With 66.3 million followers, Musk used his Twitter account to promote dogecoin, a digital currency that was originally just a joke. Musk has also continued to attack regulators, including the SEC, despite paying a $20 million fine in 2018 after allegedly committing securities fraud with his tweets.

Many politicians also accused Musk of not paying enough taxes.

Even some of Musk’s biggest supporters admit there is hype surrounding Tesla’s value. Amid a stock market boom, the company’s valuation has surpassed $1 trillion this year, making Musk the world’s richest person. It’s worth mentioning that Tesla delivers less than 2% of all new cars and trucks worldwide.

Behind the noise, speculative frenzy, and disregard for the rules, however, lies an achievement of great value. The FT honors Elon Musk as Person of the Year because he has made a historic shift in the world auto industry towards electric vehicles. Even if Tesla somehow collapses next year, Musk is still transforming one of the world’s most important industries in ways that could have profound implications for governments, investors, and investors. private – and for the climate.

In an age often defined by new technology, Musk is establishing himself as the most truly innovative entrepreneur of his generation.

The results of Musk’s unusual risk taking and brand pushing are not limited to cars. His private space company, SpaceX, brought human flight back to US soil last year for the first time since the Space Shuttle. SpaceX’s Starlink network is kicking off the world’s first commercial satellite broadband service, and a giant new rocket, dubbed Starship, awaits its first test launch.

Musk regularly makes statements about the future but asserts firmly, as if daring to challenge his listeners. For his admirers, it made him a visionary unaffected by the limited mental constraints of other entrepreneurs. But for critics, he embodies an arrogance that disregards the impact of those ideas on the world.

So does Musk think the goal he set for Tesla more than 15 years ago, to lead a transportation revolution, has finally been achieved? “I’m pretty encouraged by at least what other automakers say. We basically did Tesla at risk, not because we thought it would be profitable, but just to show that it could be done.“.

Tesla’s recent results seem to prove that it has succeeded. After years of struggling to prove that the company could be financially viable, Tesla’s profit margins have risen dramatically, and many investors are ready to bet they’ll take the lead. The new electric, autonomous vehicle industry is budding globally.

“I’m just trying to get people to Mars and enable freedom of information with Starlink, promote sustainable technology with Tesla, free people from the hard work of driving.“, said Musk.

Pushing boundaries and controversies got Musk into trouble. Tesla is being investigated by US securities and transportation regulators over the safety of its driver-assistance technology and whether it concealed the fire risks of its solar panels. Musk’s outspokenness on Twitter prompted a regulatory complaint to force him to step down as Tesla chairman, while criticism and mockery of regulators have worn down the patience of many admirers. his grave.

When asked why he openly opposes regulators, Musk pointed to what he believes is the failure of the US Securities and Exchange Commission to protect investors from scammers. short sale. At the National Transportation Safety Board, he said: “I feel they are more after the press headlines than real safety. That’s clearly something I won’t respect, nor should I respect“.

Of course, Musk still denies he flouted regulations: “Sure there might be some bad guy writing that I don’t agree with the rules, they give a story and make it sound like I’m a person, like a madman. I don’t mean to suggest dissolving any governing bodies, or anything like that. I’m not some kind of libertarian“. 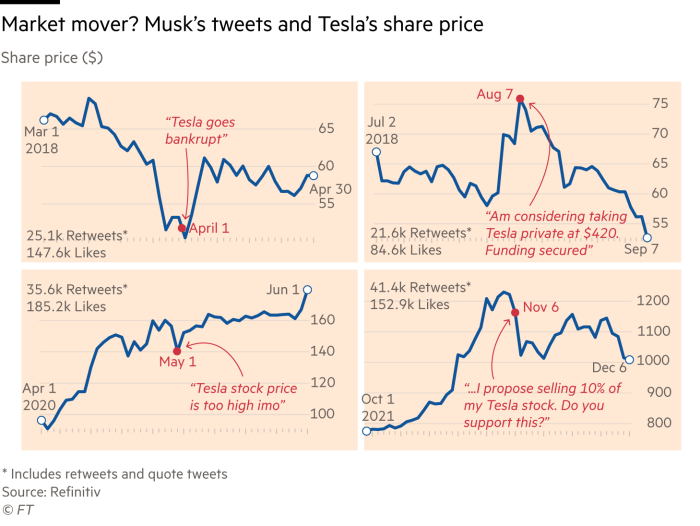 So are some of Musk’s weird Twitter actions part of a targeted advertising campaign? Borrowing a line from the movie Gladiator, Musk said: “I mean, aren’t you entertained? I don’t admit I’ve ever made stupid tweets that sometimes shot myself in the foot. But you know, in a way, it’s entertaining and interesting, informative, or whatever.“.

Simon Sproule, former head of marketing and communications at Tesla, said one result of Musk’s “antics” was to make Tesla a famous brand without spending a dime on advertising. “He tore up the rule book about how CEOs should behave“. In the process, he almost becomes a counterculture figure and reaches people who aren’t normally interested in cars or space.

Musk’s impact on the global auto industry didn’t appear until recently. Before that, he achieved early success as one of the founders of PayPal.

Before Tesla, Lutz said GM engineers firmly refused to even believe that the lithium ion batteries used in laptops could generate enough power to drive a car. Tesla’s first car, the Roadster, was enough to convince them, he added.

Daimler and Toyota also seem to know the electric car future is looming, partnering with Tesla shortly before its 2010 listing to use electric powertrain technology while providing the money. necessary side. However, the alliances did not last long.

Pierre Ferragu, an analyst at New Street Research, says proving that electric cars can be profitable means flipping every accepted aspect of the industry, from the way the supply chain works. approach to consumers.

Laurie Yoler, an early Tesla member, also thinks Musk has the vision to start with a white paper and the perseverance to see through. “He’s not afraid of people saying he’s crazy,” she said.Many people say they are thinking from first principles, but they are only increasing. He really saw the biggest idea “. 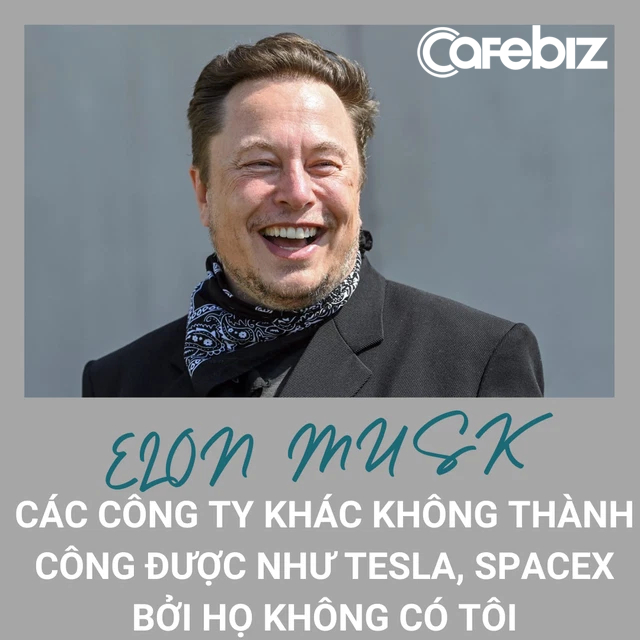 Musk’s own explanation of Tesla’s success shows his passion for engineering. “What people who don’t work with me don’t understand is that I’m an engineer first and foremost. How did Tesla and SpaceX succeed when other companies have more resources and money than me? The problem is they can’t hire me“. Gene Berdichevsky, former Tesla battery executive said: “When you solve the hardest problem in the world, the best people in the world come and work for you. For a decade, Tesla was the only company in the industry“.

Musk said he spends seven days and 80-90 hours a week working on the most important projects at Tesla and SpaceX. “It’s not that I’m arbitrarily trying to micromanage. I’m really engaged in work: What’s the most useful thing I can do? I am very good at technology and engineering. Everyone has their talent, and engineering is my talent. I can’t sing or dance, but I can do well technically“.

Despite his wealth, Musk said he doesn’t own a house, yacht or luxury vacations. “I aim to work as long as I can work and be productive and contribute – it’s my nature“.

Days after saying this, Musk tweeted that he was “think about quitting your job” out of fatigue. Was it just another provocation by Musk, or something that should be taken seriously?

“Unfortunately, people literally take every word Musk says and don’t realize when Musk is joking or getting serious.“, Yoler said. She said that people who don’t know Musk often don’t realize he has.great sense of humourHowever, she also said that sometimes Musk’s tweets are made to look like the product of fatigue and “too little sleep”.

Musk’s holistic management style and the pressure he puts on his employees to race with problems, both have their downsides. People who have worked with Musk describe how he was able to sow confusion and chaos.

Although Musk makes a lot of mistakes, he says constantly pushing the boundaries of what is possible means he will achieve important breakthroughs before anyone else.