According to The Guardian, researchers from the University of Eindhoven have successfully developed a prototype of an artificial uterus, thereby helping to save the lives of premature babies and potentially save women from carrying a painful labor later in life.

By 2017, this prototype was successfully tested by scientists from the Department of Pediatrics and Hospitals of Philadelphia (CHOP) when raising a lamb in an artificial womb environment.

For those who have seen the movie “The Matrix”, this is probably the future of many babies born from artificial wombs.

From theory to reality

In 2019, the EU Horizon 2020 Program agreed to award 2.9 million Euros to any scientist who develops a model of an artificial uterus.

This prototype was built by researchers at Eindhoven University of Technology when they built an artificial environment like a human uterus, wrapping babies with liquid and pumping oxygen and nutrients through the umbilical cord.

The Eindhoven team says their prototype is not simply a plastic biological bag, but is based on a real woman’s womb and includes the sound of a mother’s heartbeat.

According to Professor Guid Oei of Maxima Medical Center, previous approaches to premature babies have many risks because the baby’s lungs and intestines are not fully developed. So pumping oxygen and nutrients can damage organs. However, new technology can change all that.

Currently, every year around the world, about 1 million children die from premature birth and many babies suffer from birth defects due to being born too early.

Normally, a fetus will need 40 weeks of development in the womb and any birth before 37 weeks will be considered premature. Babies born between 23-24 weeks face the possibility of birth defects or even death.

The Guardian reports that in countries with developed medical systems, babies born within 23 weeks have only a 24% chance of survival and the remaining 76% will have a chance of having birth defects such as brain damage, blind, have lung and bowel problems…

Premature birth is currently the leading cause of death and disability in children in developed countries. Therefore, artificial uterus technology could be a breakthrough for this problem.

In 2017, doctors at CHOP successfully experimented with an artificial uterus with a 23-week-old preterm lamb. Housed in a biobag with oxygen and nutrients pumped through the umbilical cord, the lamb continued to thrive and grow up healthy even after leaving the artificial womb.

“The above experiments are extremely important because they demonstrate the feasibility of keeping newborns alive for about four weeks with an artificial womb environment,” said Professor Oei.

However, the development of this technology is also controversial as scientists will have to test them on real children as well as the long-term effects of using an artificial uterus on young children. That’s not to mention the ethical issues when people can maintain the breed in a non-traditional way.

Will people in the future be born in artificial “tubs” like in the movie “Matrix”?

“It is clear that legal and ethical issues will arise as this technology develops and is put into practice,” warned law professor Elizabeth Chloe Romanis of the University of Manchester.

Artificial uterus technology is nothing new. The Karolinska Institutet in Sweden published a research paper in 1958 on the use of an artificial uterus. Several research groups in Canada performed experiments on lambs in the early 1960s, and in Japan in 1963.

In fact, this technology has not been copyrighted and they have been made public since 1958 until now. Many experimental projects have been carried out and each time have attracted the attention of the public because of their haunting images.

While some support this technology because it saves the lives of premature babies and can help women less labor pain, but many people argue that this practice destroys the fabric of human society and goes against the laws of nature. course.

“The biggest threat from this technique does not come from mothers who are not healthy enough to get pregnant, but from women who do not want to have children. If artificial wombs are developed, they have the potential to stimulate abortion. abortion because these fetuses will be incubated in artificial cages and adopted,” warned Dr. Anna Smajdor of the University of Oslo-Sweden.

Also according to Ms. Smajdor, eliminating the role of women in childbirth can come with a multitude of consequences. Since the 1950s, dozens of US states have prosecuted women who use drugs while pregnant and if the technology is developed, will the government be willing to remove the fetus from the mother’s body for healthy development? stronger? 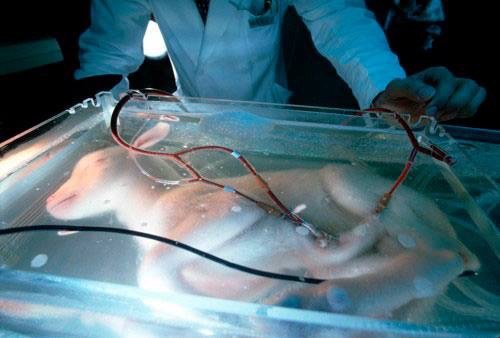 Similar to sci-fi movies, the development of an artificial uterus and egg freezing could help many women give birth without pain and even have the ability to give birth at an older age. thereby focusing on career.

But they will make natural pregnancy a sign of poverty as rich countries pursue such breeding.

“Having a painful birth is associated with maternal values ​​and motherhood when giving birth, not just the story of maintaining the breed,” warns Dr. Smajdor.