Black Friday, also known as Black Friday, is a special shopping occasion at the end of the year, many items will be heavily discounted so that users can buy essential items at low prices. “bargain” price. Black Friday is celebrated every year on the last Friday of November, and this year it falls on November 26.

On the occasion of Black Friday, Huawei’s official Twitter page in the US posted a post saying that the company will sell off 100% of the items currently on sale in the country. Many people have thought that this is a “bargain” to be able to buy Huawei phones, tablets or other Huawei accessories for 0 dong, but it turns out this is just a joke. least.

“Special Black Friday Shopping! We’re 100% off all phones currently on sale in the US,” HuaweiUSA announced on Twitter.

As we all know, in 2019, President Donald Trump announced sanctions against Huawei, banning the company from doing business with any US technology companies. This sanctions has made Huawei miserable and in a state of stalemate, all Huawei products no longer appear on US soil, and the company is not allowed to use components originating from the US. Huawei from the top smartphone manufacturer plunged with a final market share of only 0.1% in the world (excluding China’s domestic market).

“Okay guys, it’s just a joke. We can’t sell anything in the US,” Huawei explained after many people thought there would be a good deal on Black Friday. 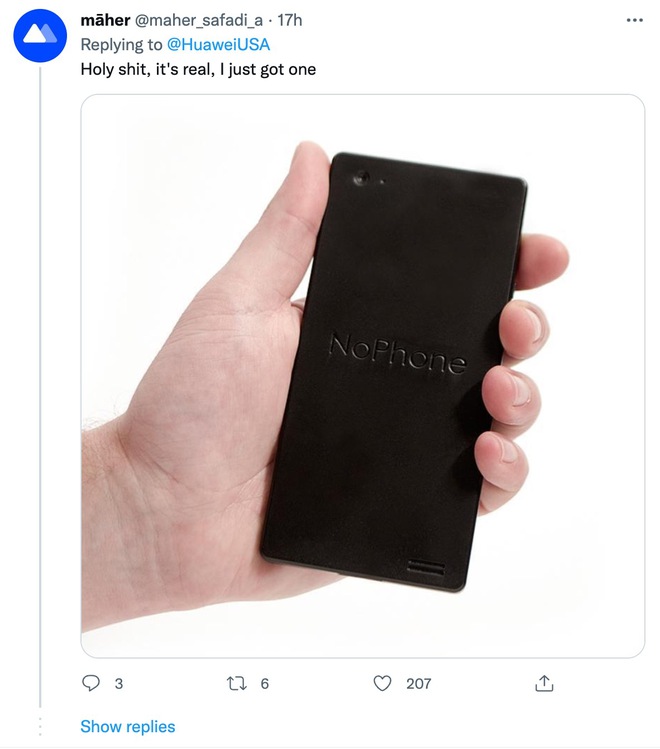 “Oh this deal is real, I just bought one”, many Twitter users also “hooked” to Huawei’s joke

At the present time, Huawei has obtained a license to use part of US technology, for example, it is allowed to use Snapdragon chipsets for smartphones sold in China, but is not allowed to use 5G modems or its services. Google. This is also the reason why Huawei’s recently launched smartphones do not support 5G networks even when sold only in the Chinese domestic market.