If you have ever known puffer fish, you must know that they can inflate their bodies like a balloon. Puffer fish can expand their waist by 3 times. If that were to happen to humans, imagine being able to inhale air into your stomach to stretch your waistline up to 3 feet and then hover around the room, repeatedly hitting the ceiling.

That’s what a puffer fish will do if it encounters an enemy. This defensive tactic helps the puffer fish look intimidating. Some species even have spines around them that turn them into a ball of spikes that can threaten any fish that might try to eat them.

But how do puffer fish actually swell? Have they ever flown into the sky and drowned in reverse? 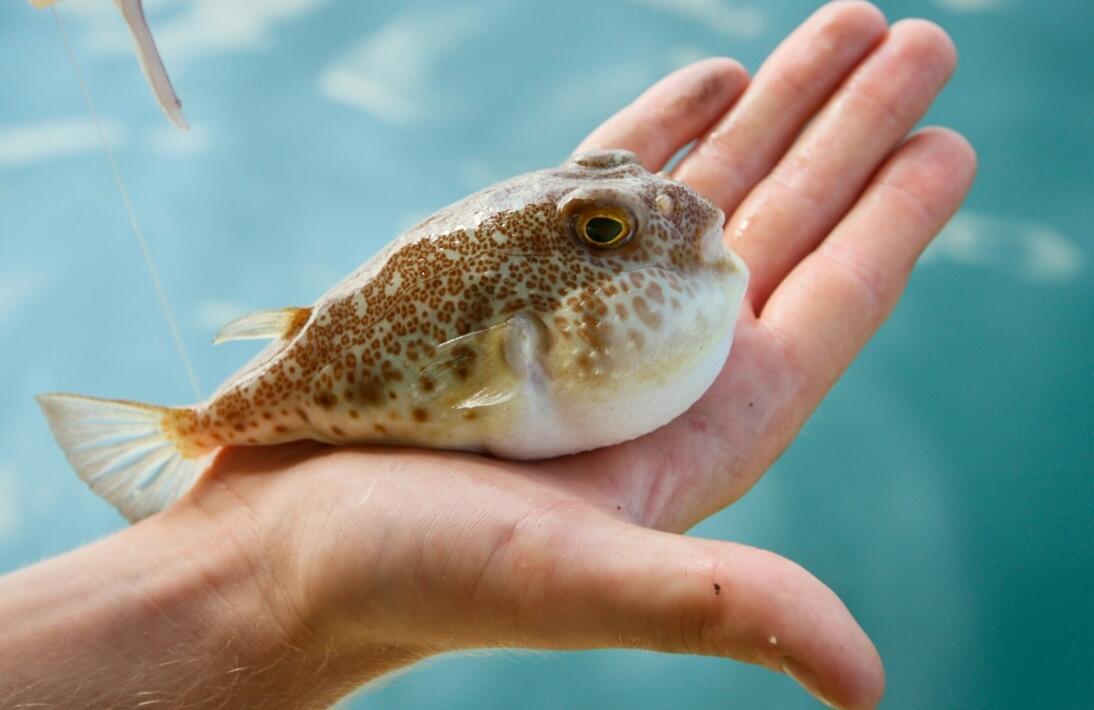 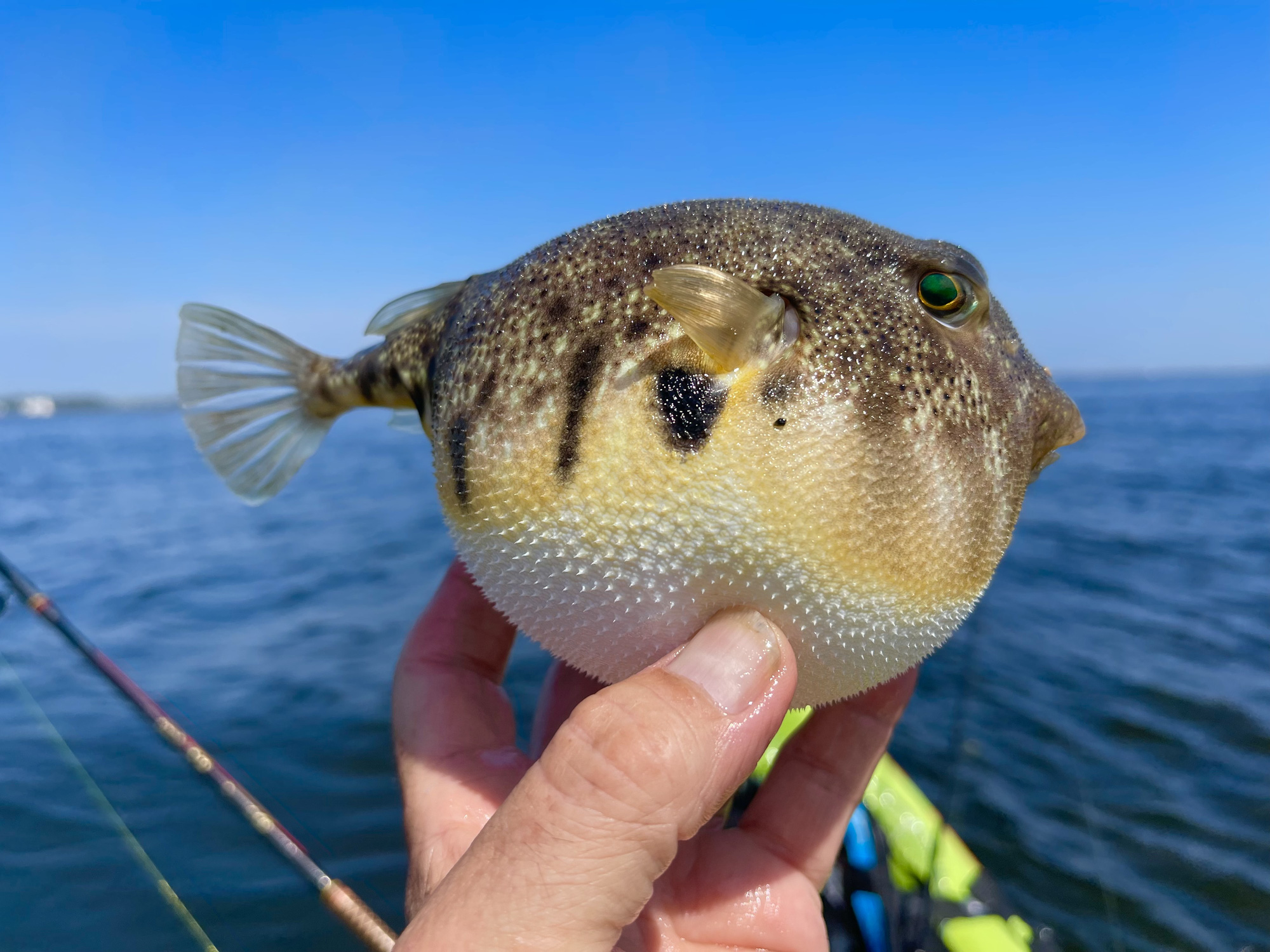 In fact, when you see a puffer fish inflate, they don’t pump air into their lungs to do so. Instead, the puffer fish drink water into the stomach. Extremely large sips of water, usually 10-15 sips, are pumped in through a special muscle in the mouth.

Puffer fish have muscles in the esophagus that act as a valve to shut off the water. When their stomach is full, the esophageal muscle will contract, keeping the fish from collapsing. It is not until the danger is over that the puffer fish uses another muscle bundle at the bottom of the abdomen to force the water out.

These are muscle bundles that most other fish do not possess. Only puffers, when they chose to evolve to inflate like a balloon, do. The ancestors of puffer fish did not have ribs and pelvis. Because if you own these two bones, they will not be able to swell.

How do puffer fish inflate their bodies?

Besides bones, puffer fish also have to sacrifice the digestibility of their own stomach. With puffer fish, the stomach is only used to store water, not to contract to digest food. Therefore, their intestines will have to work harder to take on all the digestive tasks.

In return, the ability to inflate like a ball of spikes provides the puffer fish with an effective defense strategy. Very few aquatic animals are interested in a thorn ball floating in the water. And even if the puffer fish is suddenly attacked from the air, by a bird that hunts for fish, they can also escape death thanks to this mechanism.

Unlike underwater, puffer fish lifted up in the air can still suck in air to inflate the stomach. Now it’s a real balloon. When a bird holds an inflated puffer fish in its beak, it will tend to release the fish as it will not be able to swallow them.

In one study, scientists observed that up to half of puffer fish were able to escape a bird’s beak using their puffing tactics. And even if they can’t get out, pufferfish have a two-way battle strategy against any enemy who dares to swallow them. 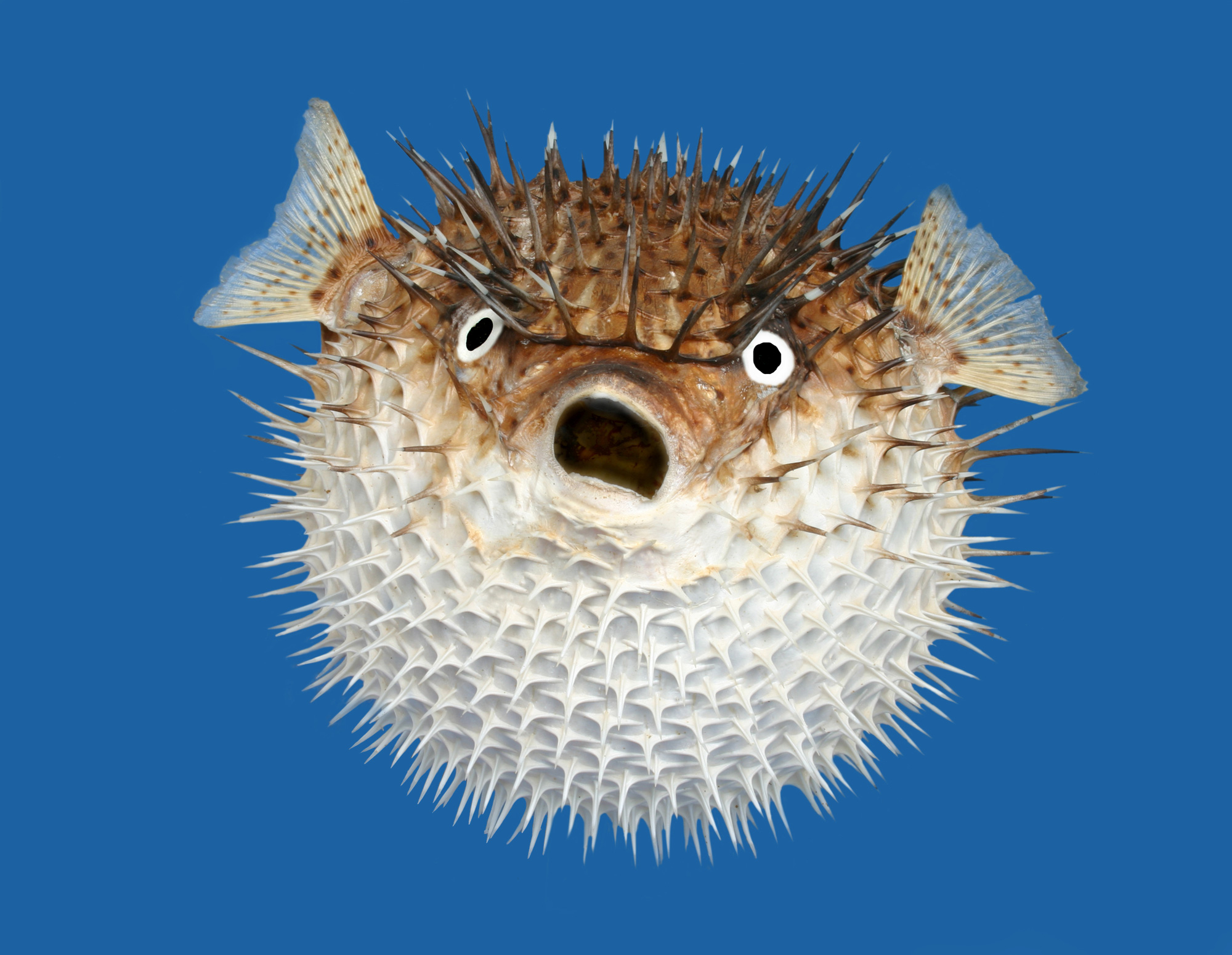 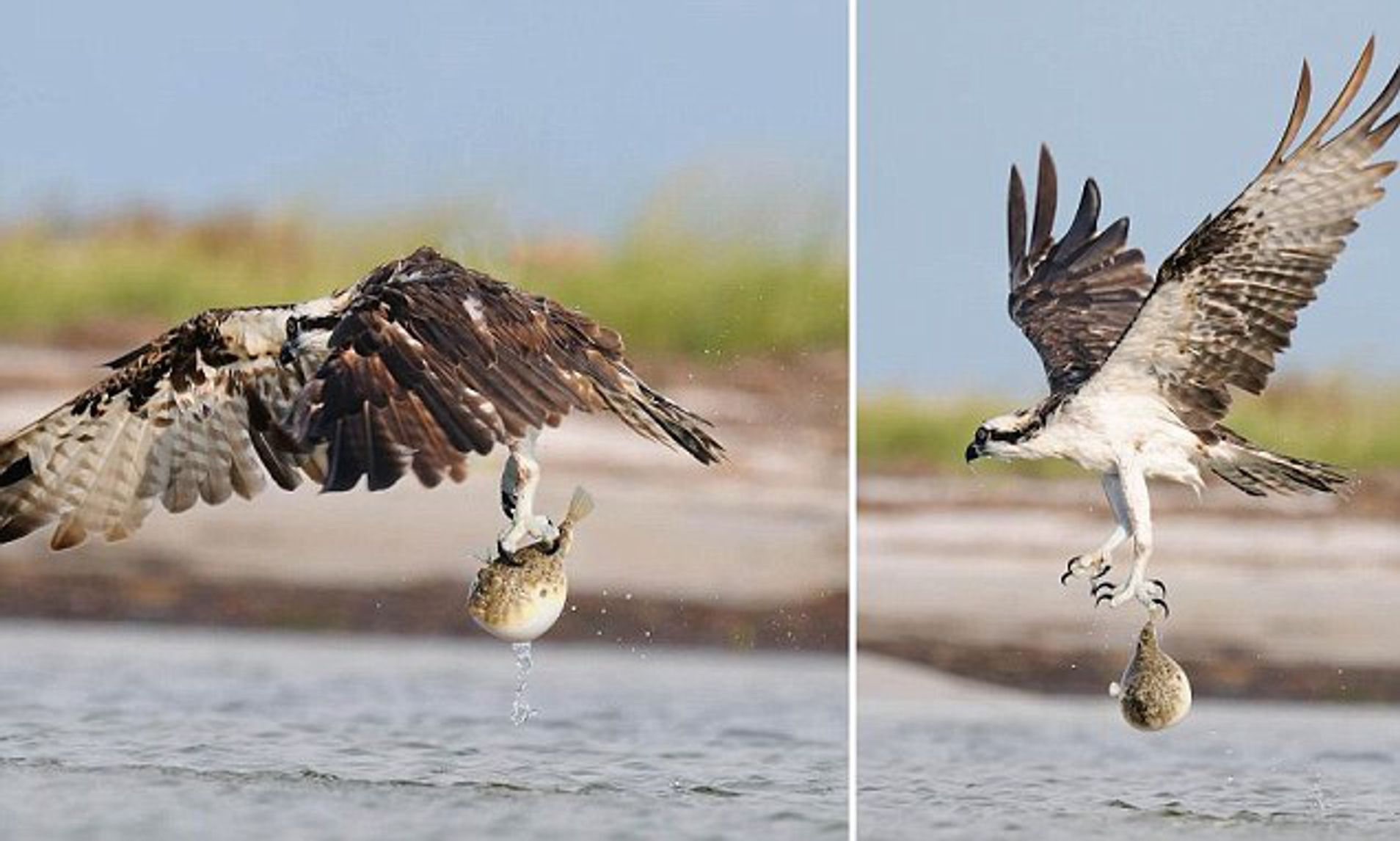 A puffer fish puffs up when it is caught by a bird of prey. The bird is ready to let go of its prey because it knows it cannot swallow it.

That’s because the puffer fish’s body is laced with a neurotoxin called tetrodotoxin. It is 1,200 times more toxic than cyanide. So poisonous that one puffer fish can kill 30 adults.

The puffer fish’s tetrodotoxin toxin numbs the tongue and lips, causing dizziness and vomiting, followed by numbness and tingling all over the body. It will make your heart beat faster, but your blood pressure will drop and eventually total paralysis. When your diaphragm can no longer contract, you essentially stop breathing and die.

The origin of the tetrodotoxin in puffer fish is up for debate, but most scientists think they are produced by bacteria that live in their guts.

Puffer fish keep tetrodotoxin on the skin, in the intestines, and especially in the ovaries and liver. But if you know how to prepare it, some skilled chefs can still serve puffer fish in their restaurants. 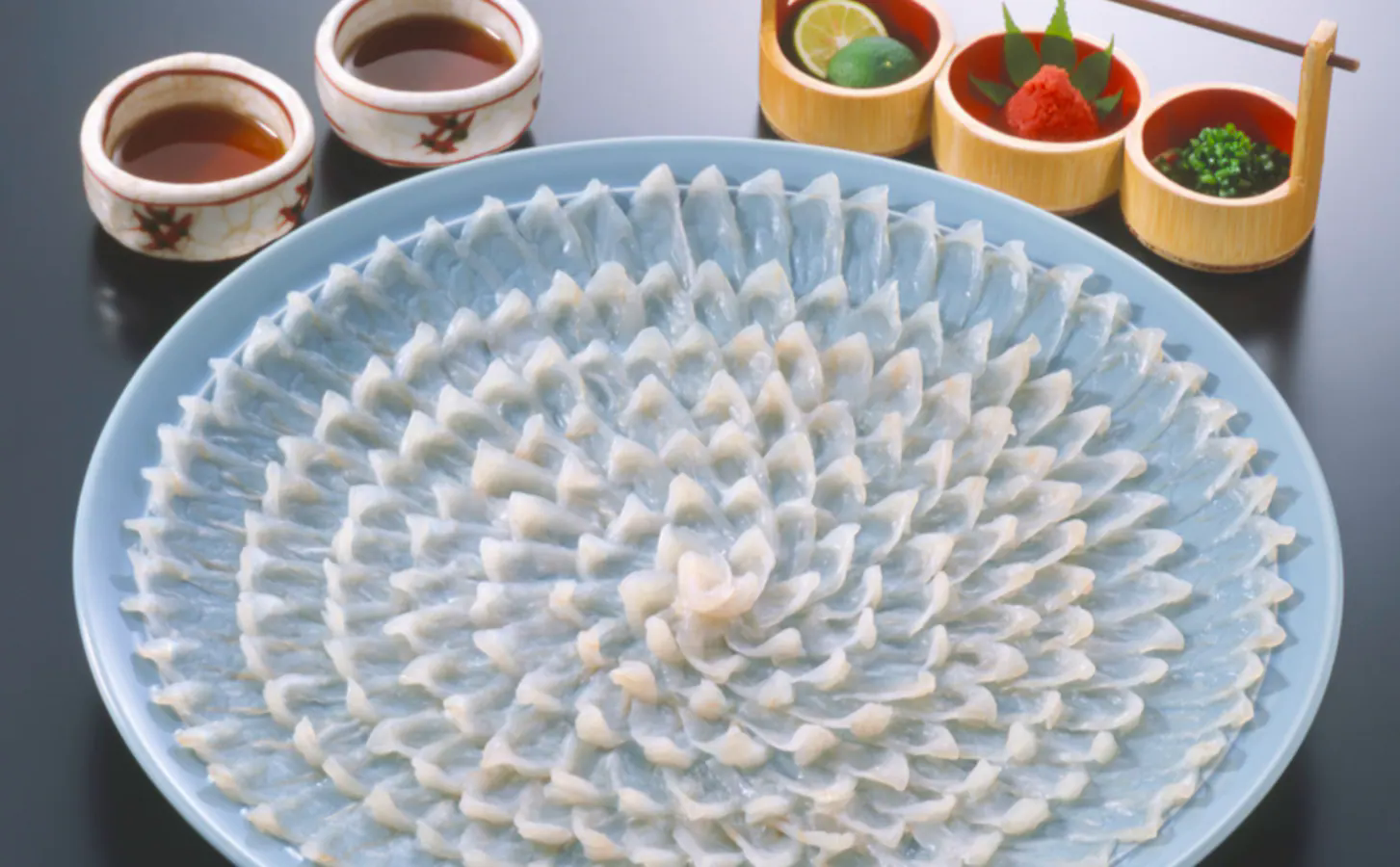 Japanese fugu dish made from puffer fish meat. The flesh of puffer fish is not poisonous, but chefs must be very skilled while preparing puffer fish, as toxins can unfortunately be transferred from the fish’s viscera to the flesh if the chef does not filter them carefully.

In Japan, puffer fish is often made into a delicacy called fugu. In Korea and China, people also often eat puffer fish. This is surprising because the puffer fish with its toxins ranks as the second most poisonous vertebrate in the world.

So to know how delicious their meat must be, people risk their lives to eat them.