Scientists in South Africa said yesterday they had discovered a new variant of the SARS-CoV-2 virus with the largest number of mutations ever. Named after the Pango nomenclature B.1.1.529, this variant has a total of more than 50 mutations compared to the original SARS-CoV-2 virus.

More worrying is the distribution of mutations: B.1.1.529 has 32 mutations concentrated on the protein spike, which is the outer envelope of the virus that helps it infect human cells. More than 10 mutations were located on the receptor-binding domain (RBD), the spike protein that directly helps the virus bind to lung cells. 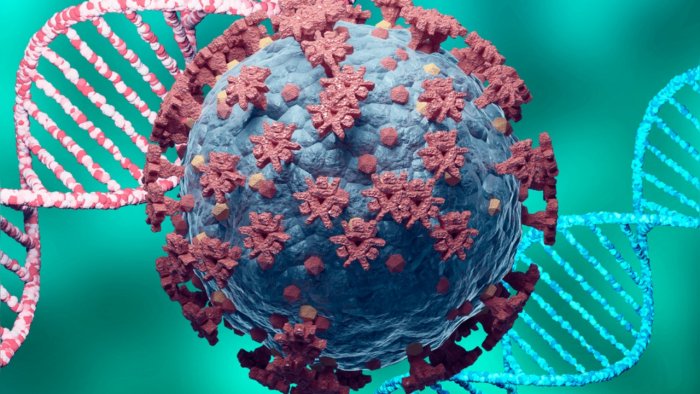 A new COVID-19 variant dense with spike protein mutations has just been discovered in South Africa.

In comparison, the most worrisome variant so far is that Delta has only two of these mutations on the RBD spike. South African scientists suspect this new variant is responsible for the spike in COVID-19 cases in the country, namely a 10-fold increase in just one month.

The World Health Organization (WHO) is holding an urgent meeting to evaluate variant B.1.1.529. If placed on the list of variants of concern, which currently includes Alpha, Beta, Gamma and Delta, variant B.1.1.529 will also receive a name according to the Greek alphabet (expected to be Nu). ).

Here are 5 key things we know about the new COVID-19 variant in South Africa so far:

Although it is difficult to know exactly where the new variant in South Africa originated and how it acquired the new mutations, scientists now have a hypothesis. Francois Balloux, director of the Institute of Genetics at University College London, said B.1.1.529 likely evolved in the body of a patient whose immune system was weakened by HIV/AIDS and was untreated. 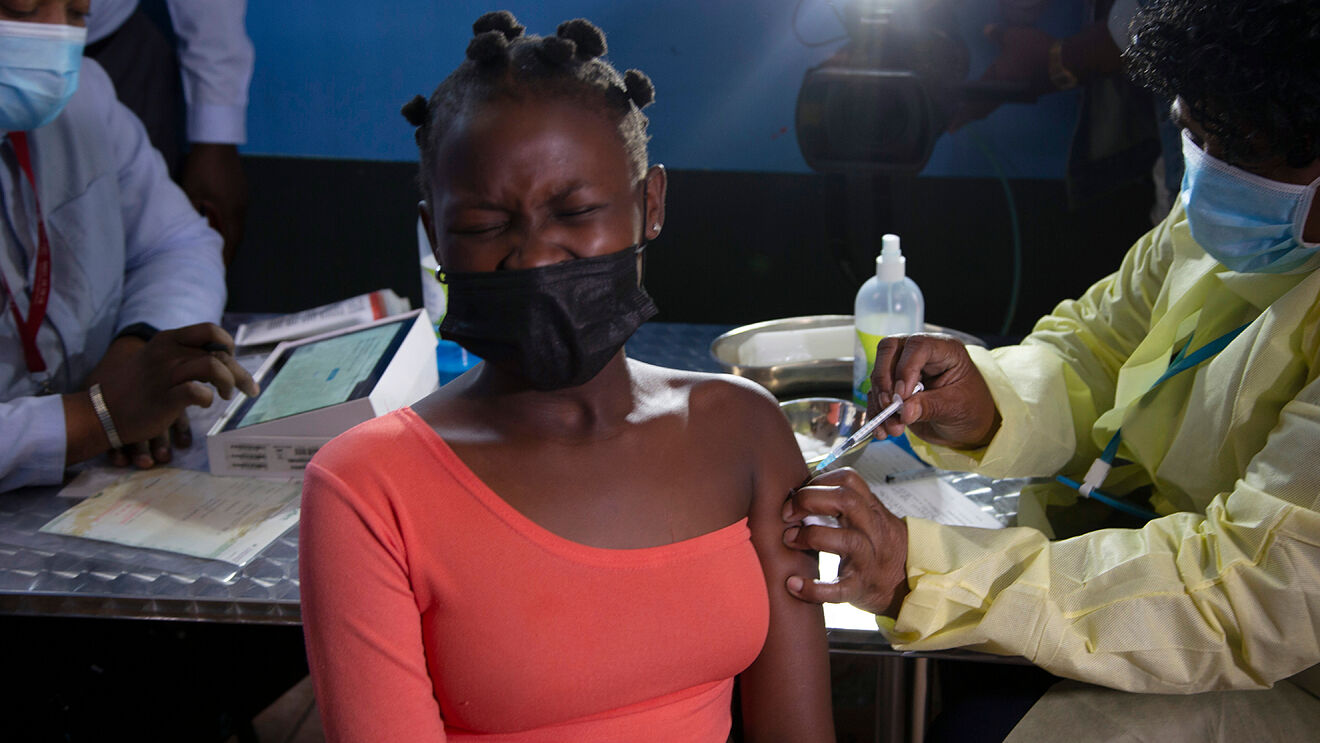 A South African citizen is vaccinated against COVID-19.

South Africa currently has 8.2 million people living with HIV, the highest number in the world. And they noted the Beta variant also came from an HIV patient last year.

In the body of a person infected with HIV/AIDS, their immune system is very weak and that is the condition that allows the SARS-CoV-2 virus to persist. The longer it survives, the more mutations this virus accumulates through each of its life cycles.

2. How dangerous is this variant?

With that said, the genome sequencing of B.1.1.529 shows that it accumulates a large number of mutations. The mutations seem to be helping this variant spread more quickly. Tulio de Oliveira, a virologist at Stellenbosch University, South Africa said:

“B.1.1.529 seems to spread very quickly! In less than two weeks, it has dominated all infections after the Delta wave that devastated South Africa earlier”. 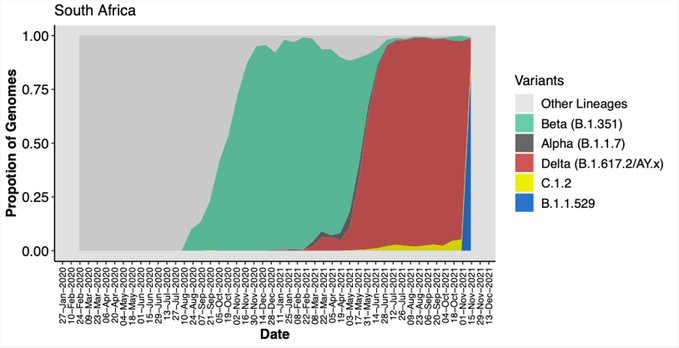 Rate of SARS-CoV-2 virus gene sequencing in COVID-19 patients in South Africa. Variant B.1.1.529 (blue) is increasing almost vertically on the chart.

South Africa’s Health Minister Joe Phaahla also confirmed the new COVID-19 variant in the country was responsible for the exponential wave of reported cases. As of the middle of this week, the number of daily COVID-19 infections in South Africa has reached 1,200 cases compared with 106 cases at the beginning of the month.

As of Thursday, nearly 100 cases of COVID-19 in South Africa had been sequenced and discovered B.1.1.529. While authorities suspect this variant may account for up to 90% of all actual infections that have been tested for PCR.

In addition to spreading rapidly, the large number of mutations in B.1.1.529 raises concerns about the possibility of this variant being resistant to vaccines, therapeutic drugs and even causing higher mortality rates. . 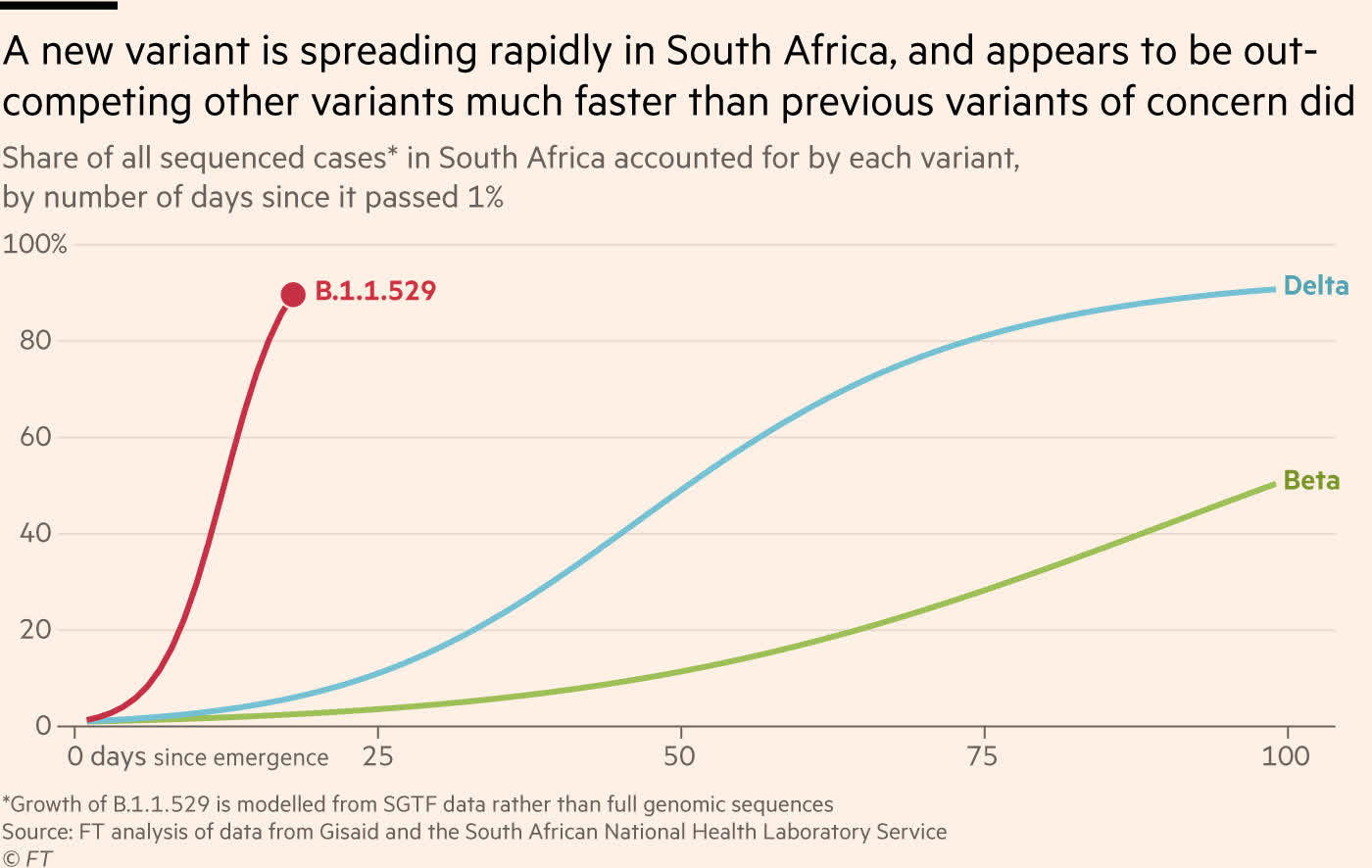 However, this is all speculation and scientists will need more time to find out. Maria Van Kerkhove, WHO technical team leader on COVID-19, said:

“When you have so many mutations on a virus, that becomes a concern. Mutations can affect how the virus behaves. It will take a few weeks for us to understand the impact of the variable. can [B.1.1.529] this for any potential vaccine”.

In terms of toxicity assessment, perhaps we will have to wait a while to see if this new variant increases COVID-19 mortality in South Africa?

Outside of South Africa, variant B.1.1.529 has been detected in neighboring Botswana. The special thing is that it has infected people who have been vaccinated. In Hong Kong, the Center for Health Protection of this special zone also reported 2 new cases of infection with B.1.1.529.

They said the variant was present in a man who flew to Hong Kong from South Africa on November 11. It is likely that the virus was then passed on to a second man in the room opposite the hotel. in which he resides. 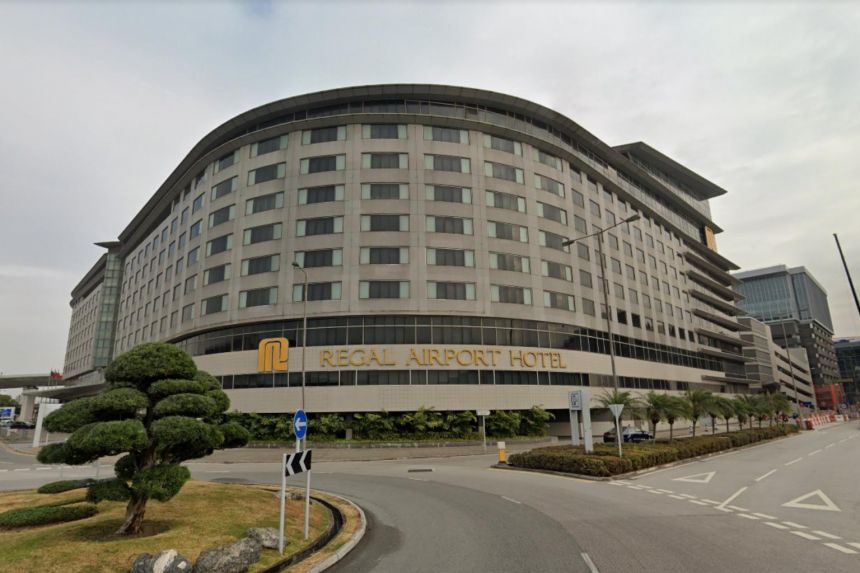 Outside the hotel, a case of infection with variant B.1.1.529 was detected in Hong Kong.

Israel today also confirmed the first case of COVID-19 infected by variant B.1.1.529. It was a tourist returning from Africa but not South Africa.

Australia said today that it may also take similar actions to close routes because of concerns about variant B.1.1.529. Meanwhile, India called for strict screening of passengers arriving from South Africa, Botswana and Hong Kong.

The World Health Organization said it would hold an emergency meeting today to discuss variant B.1.1.529. Their representative, Ms. Kerkhove, said that the content in the meeting will discuss methods of diagnosis, treatment and vaccine resistance of this new COVID-19 variant. 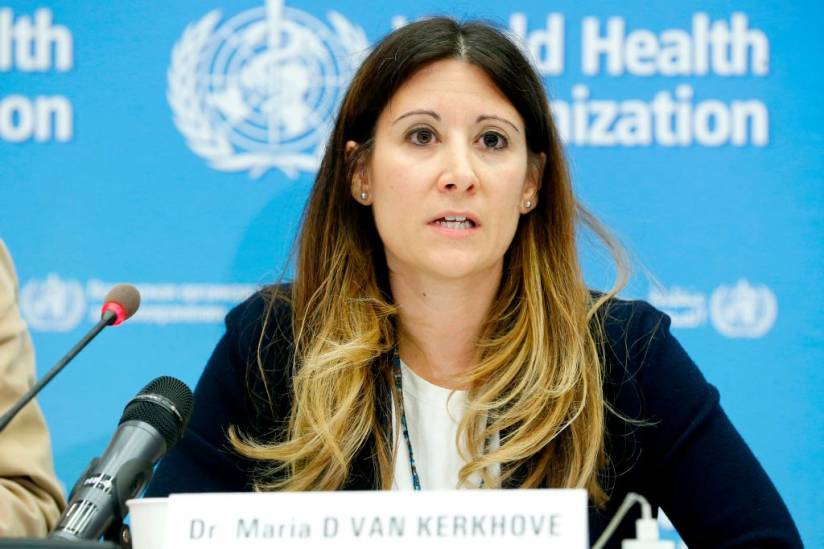 “Initial analysis shows that the variant has a large number of mutations and needs to be studied further. We are working together to understand the implications of these mutations on this new variant.” said Mrs. Kerkhove.

WHO will also consider classification B.1.1.529 as a variant of concern, which means it will have a Greek alphabet name, possibly “Nu”.

The new variant B.1.1.529 is a reminder to us that the COVID-19 pandemic is not over yet. Therefore, it is important that we maintain good precautions such as wearing masks, keeping distance, washing hands, avoiding large gatherings and always monitoring health and making medical declarations when necessary. . 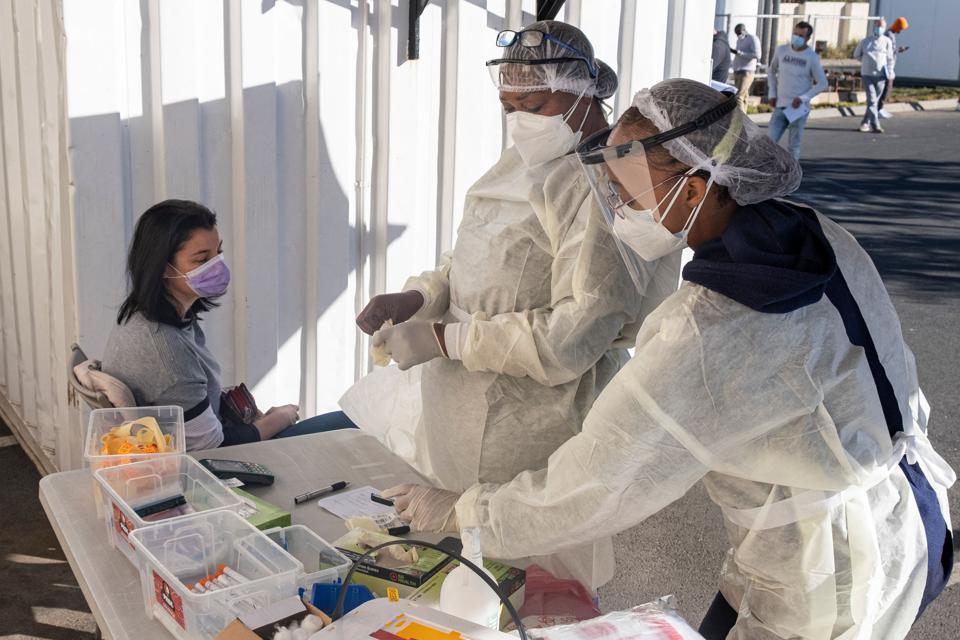 Besides, promoting vaccination will also create a safe shield for the community. The emergence of new COVID-19 variants has been predicted by scientists in advance. Therefore, it is important that we implement the right strategies to deal with it calmly.