As one of the highly-rated exclusive games on PS4, God of War (2018) is expected to first land on PC on January 14, 2022. Like other PS4 exclusives that have been ported to PC before, the game will also be upgraded in terms of graphics to take advantage of the power of top PC configurations. At the same time, the game will also support 4K resolution, no frame rate lock, DLSS and Reflex features for Nvidia users, FidelityFX Super Resolution feature for AMD users, support for screens with a ratio of 21: 9, etc

Specifically, there are 5 different detailed configuration levels announced by Sony, based on the resolution, graphic settings and frame rate gamers want to achieve in the game. 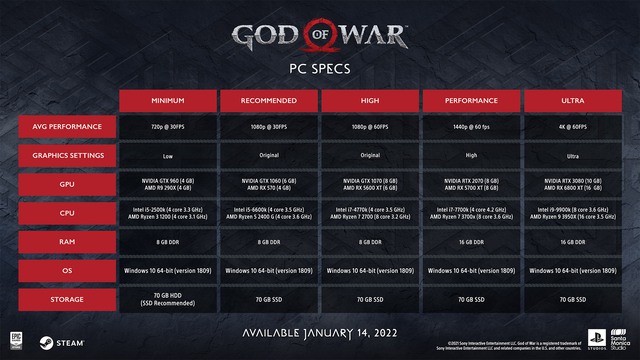 In the opposite direction, if you want to achieve 60 FPS at 4K resolution with the highest graphics setting (Ultra setting), God of War gamers must equip their PC with the most powerful hardware components such as: RTX 3080 (or RX 6800 XT), i9-9900K CPU (or Ryzen 9 3950X). In addition to the CPU and GPU requirements, gamers also need to equip with at least 8GB of RAM, and 70GB of free hard drive space.

Configure all graphics effects to turn on, play smoothly at 60 FPS at 4K