While x86 processors are often seen as consuming more power than their ARM competitors, a new Intel patent reveals a concept called Digital Linear Voltage Regulator (D-LVR) with many improvements. about the energy efficiency that will be found on future processors, such as the Raptor Lake series.

Earlier, in the introduction to Raptor Lake, Intel said that the next Alder Lake processor family (Intel’s 12th processor family) will be backward compatible with Intel 600 series motherboards and so also Compatible with LGA1700 socket. Besides, a previously leaked Intel product roadmap also shows that the Raptor Lake series can be equipped with a hybrid system that helps bring better performance.

However, with the application of a new Intel patent, new energy efficiency is the most noticeable improvement in Intel’s new chip line. 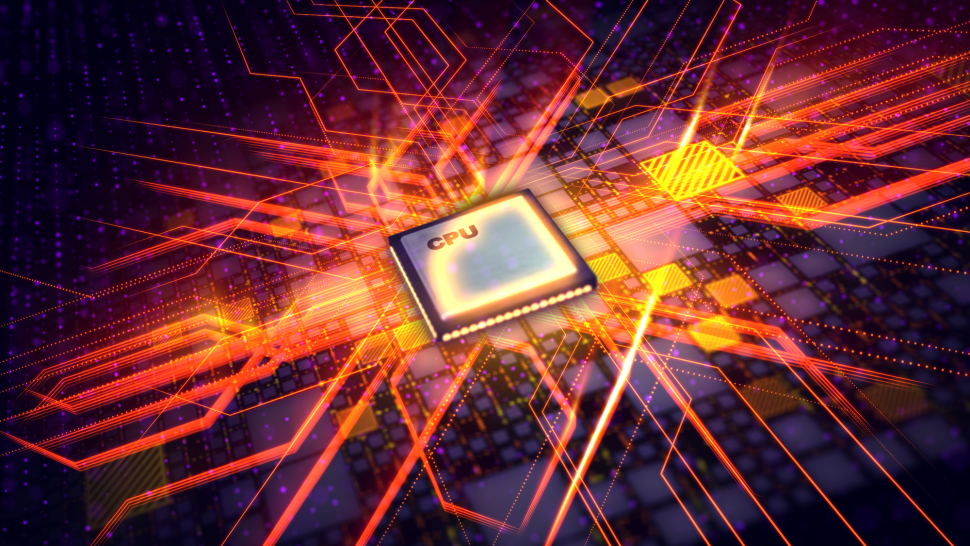 Filed by Intel in January 2020, the patent is titled “Digital Linear Regulator Clamping Method and Apparatus” (or Digital Linear Regulator Clamping Method and Device). According to the patent’s description, the D-LVR essentially acts as a voltage clamp, connected in parallel with the main voltage regulator – located right on the motherboard. The mission of the D-LVR is to reduce the voltage and power consumption of the processor. In addition, D-LVR also aims to increase CPU performance.

Intel believes that with the very low cost of implementing D-LVR, the additional cost for the chip as well as the motherboard will be negligible. 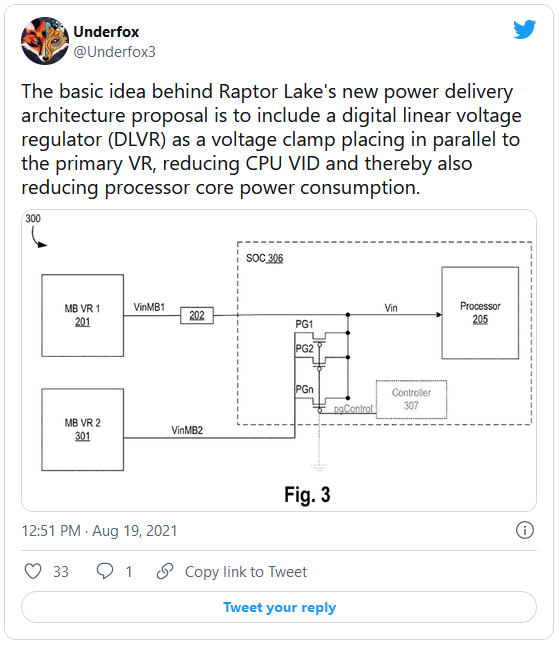 Intel also provides some documentation to illustrate how much power efficiency D-LVR can bring to its chips. With the D-LVR acting as a voltage clamp, it is capable of reducing the CPU’s Vin voltage to just 160 mV. The chip maker estimates that the device can reduce power consumption by 20% to 25%.

Normally when running a certain application, a processor rarely consumes more than 40A. The voltage regulator on the motherboard typically maintains a voltage of 1.27V, while the D-LVR’s power ports (PG1, PG2 and PGn ports) can keep the CPU’s Vin voltage at 1. .05V, which is about 50mV above the actual minimum voltage of the CPU. If the current through the CPU is less than 40A, the power ports on the D-LVR will still be off.

When the current through the CPU exceeds 40A, several power ports on the D-LVR will be activated to provide additional current to Vin. For example, when the CPU needs to draw 45A, and the motherboard’s conditioner still supplies 40A, the power ports on the D-LVR will add 5A more. Assuming the times and cycles for tasks that need to be over 40A are short, the D-LVR’s power gates will consume very little power.

With Intel’s example, while CPU power consumption decreased by 21%, performance increased by 7%.

Recently, Intel’s Alder Lake line has surpassed AMD’s Zen 3 chips in terms of performance. However, this comes at the expense of lower energy efficiency. While the Alder Lake chips are faster, AMD’s Ryzen Zen-3 chips are more power efficient. Perhaps, with the new equipment, Intel’s Raptor Lake series will take advantage of Alder Lake’s old advantages in performance, and at the same time overcome its disadvantages.

It is expected that Raptor Lake will be released in 2022. Even so, Intel’s leaked documents only show the D-LVR equipment for laptop mobile chips. In addition, many other rumored features are also expected to appear on this mobile chip, including the ability to support LPDDR5X RAM, while the desktop versions are expected to improve the CPU cache system for for gaming and the new Intel vPro feature set.