Recently, the richest billionaire on the planet – Elon Musk, had an interesting moment with his 18-month-old son. On November 17, the founder of SpaceX had an online presentation with baby X Æ A-XII.

X Æ A-XII sat neatly in Musk’s lap and participated in the first 2 minutes of the 12-minute presentation of the 50-year-old billionaire. This meeting is organized by the US National Institute of Science, Engineering and Medicine (NASEM). Musk was holding his baby while sharing some updates to Starship – the spacecraft can be completely reused.

Although Musk and Starship are the “main characters”, it is X Æ A-XII who captures everyone’s attention. The boy’s cutest moment is smiling while saying “Hi!” several times, two small arms waved slightly.

When his son was curious about the images appearing on the screen, Musk stopped and explained: “That’s the rocket.” Within a few minutes of participating in his father’s presentation, the boy sometimes widened his eyes in surprise at the strange things in front of him. Moments later, a man entered the room and carried the boy away. 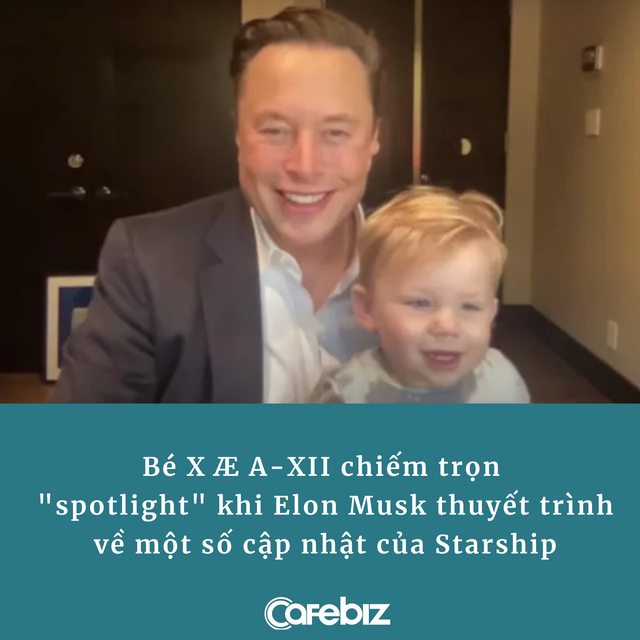 After that, the image of father and son Elon Musk became viral when journalist Christian Davenport posted on Twitter with the caption: “Elon Musk and I gave a presentation about Starship. He once told me that Mars needs you too. little”.

Netizens had mixed opinions about the video. Some people think that Musk is a bit unprofessional, confusing work and family affairs. Meanwhile, many people expressed interest in the appearance of baby X Æ A-XII and thought that this was understandable if they had to have a meeting at home.

One person commented: “When your father is the richest billionaire on the planet and intends to conquer Mars, you sit down with him to give a presentation about the spaceship.”

“Everybody has to hold their baby, even if it’s the richest person in the world and is in an important meeting,” another commented.

Right from the moment of birth, baby X Æ A-XII has received a lot of attention. Her mother is the artist Grimes. The boy is not only famous because his father is the richest man in the world and his mother is an artist, but also because of his special name. The boy is often referred to by the shorter, easier-to-remember name “Baby X”.

The couple welcomed their first child in May 2020. Two months later, Musk shared about parenting with the New York Times: “You know, babies are like machines that just know how to eat and go to the bathroom. Right now, I can’t be of much help, Grimes play a bigger role than me. But as the kid gets older, I’ll have more of a role.”

In addition, the billionaire also said that he hopes that his 5 older sons will later be attached to baby X Æ A-XII.

“I will do with X Æ A-XII what I did with his brothers. For example, if there is a business trip to Tesla in China, I will bring the kids. We will visit the Great Wall of China. The Great Wall or take the high-speed train from Beijing to Xi’an to see the terracotta warriors,” Musk shared.

Last September, Musk confirmed his split from Grimes after 3 years together. The reason is that both are too busy and often have to work in different parts of the United States. Musk said they still meet and share the responsibility of raising baby X Æ A-XII.