The controversy surrounding BKAV’s upcoming AirB headset has not stopped. The incident broke out when three YouTube channels AnhEm TV, Duy Tham and Tan Mot Cu had the opportunity to experience this unreleased pair of headphones. However, later, viewers of the three YouTube channels mentioned above discovered that the video about AirB had simultaneously disappeared on all three channels. As a result, many people questioned whether BKAV had an impact on YouTube channels, as all three videos had negative reviews about AirB.

Not long after that, BKAV CEO – Nguyen Tu Quang posted an explanation, saying that this was an “employee’s fault”.

“The incident stemmed from the fact that BKAV’s sales department transferred a set of SAMPLE PRODUCTS, an unofficial test version, to an agent’s line sales department. There is a misunderstanding in the agreement of these two departments. The fault belongs to the sales staff of BKAV, this friend did not say that this is a test product, only for INTERNAL use”, the CEO said. 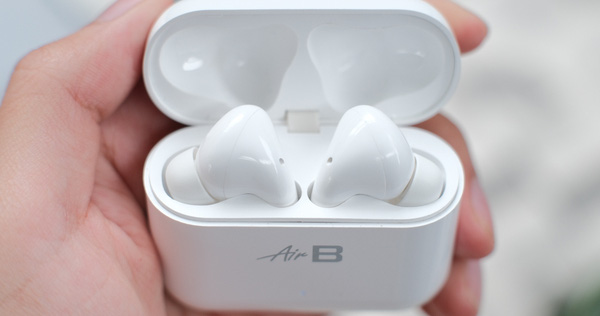 However, seemingly not accepting the explanation of CEO Nguyen Tu Quang, on November 23, Tan Mot Cu – one of three YouTubers who had experienced before the AirB product continued to post, declaring “do not want to work with BKAV”.

According to Tan Mot Cu, the biggest reason why he deleted the AirB review video was because the lack of professionalism of BKAV.

“Demo products are one thing, but the way they “stylish” For the product sent to the media, I don’t see any respect in it: the Case box is AirB Pro but the earphones inside and the paper box outside are AirB’s. When I finished the clip and posted it on Tan 1 Cu channel, then I received a notification about the error of the demo product. BKAV requested to remove the word “Pro” throughout a clip of more than 10 minutes and PUBLIC on YouTube. Anyone who does YouTube will understand that the above request is almost impossible to do and there is only one way: delete it and make a new one. I felt that my labor force was undervalued, so I decided to stop cooperating with BKAV.

Even more surprising when the incident happened, they announced that “EMPLOYEE ERROR”. Unbelievable!”, This YouTuber writes.

“Of course, when I was given a product by a brand for early review, I also understood how to “talk” to maintain objectivity and maintain the reputation of the brand. I am confident that I have given BKAV a lot of favor, accepting the condition “DO NOT ASSESS THE SOUND QUALITY because THIS IS A DEMO” of BKAV and at the same time, I have chosen words carefully so as not to have too much influence on BKAV. surname”. 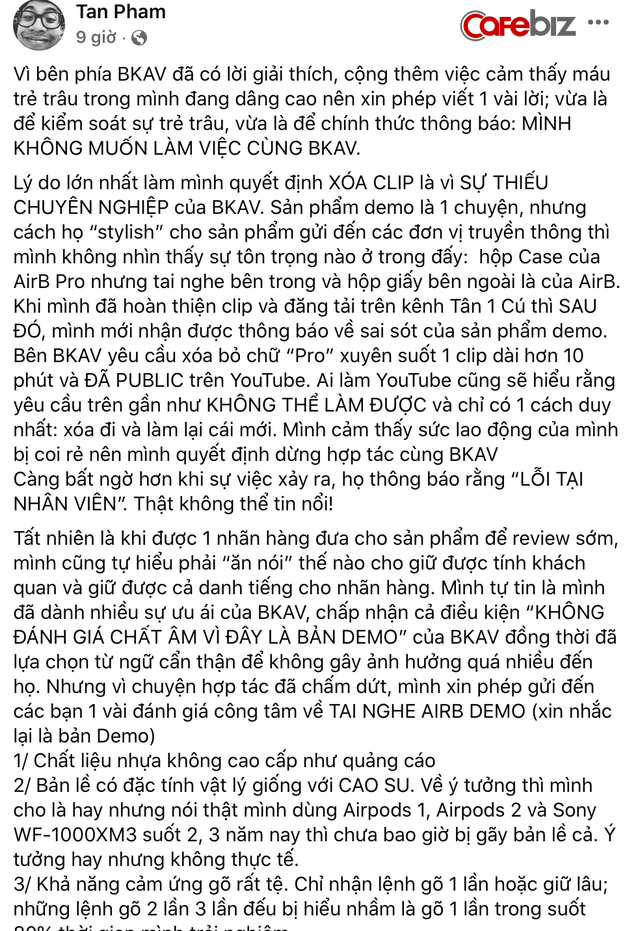 However, because the cooperation ended, Tan Mot Cu continued to send “a few fair reviews about AIRB DEMO HEADPHONES” that he experienced:

1/ Plastic material is not high quality as advertised.

2/ Hinges have the same physical properties as RUBBER. About the idea, I think it’s good, but to be honest, I’ve been using Airpods 1, Airpods 2 and Sony WF-1000XM3 for 2, 3 years, and have never broken any hinges. Good idea but not practical.

3 / The ability to touch typing is very bad. Only receive commands to type once or hold for a long time; the commands typed twice, three times were misunderstood as typing once during 80% of the time I experienced it

4/ Sound quality is EXTREMELY difficult to understand: the sound is cloudy, distorted up to 60%; almost no bass range, high range is also not good.

5/ Housing makes the size unreasonable, the rubber tips do not fit into the ear

BKAV also has the courtesy to send back the commercial version of the headset to our reviewer if there is a need. Personally, I want to say thank you to Mr. Quang, but I would like to REPLY. I will spend the legal business money, pay taxes fully made by me to buy the official AirB Pro version to do a review for you. At this point, there will be no force controlling your content, and assuming that clip “discolors”, you will understand what happens. Tan One Owl message.

We will continue to update and report on the event.