The discovery of underground cave networks in Turkey is not unusual, especially in the land of Cappadocia, which has historically been known for its eroded caves and numerous ancient chimneys. made of volcanic rock, called “fairy chimney”. 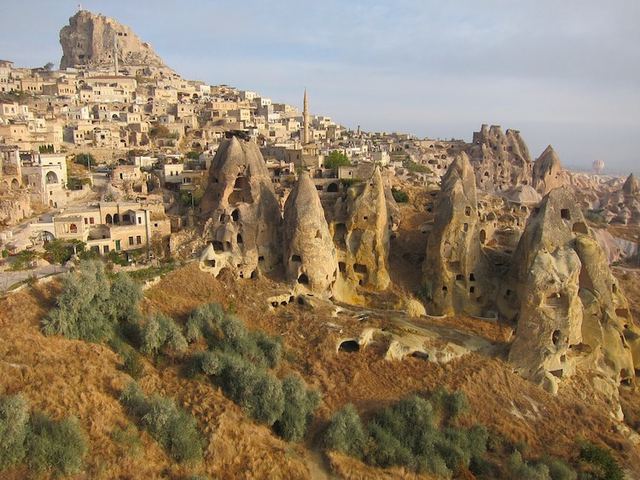 Cappadocia – a land famous for its eroded caves and numerous ancient chimneys made of volcanic rock.

Cappadocia is located in the Central “land of flying carpets”, this valley is formed from sedimentary rocks and volcanic rocks. There are hundreds of underground cities here, but the most famous and large is Derinkuyu. With a depth of nearly 80 meters and a capacity of up to 20,000 people, the city of Derinkuyu has everything its inhabitants need to survive a historical period of resistance to invasions.

The discovery of this multi-storey underground city happened in 1963 when a resident was repairing a house. When this man used a hammer to break down the old wall of his house, he discovered a secret passage with amazing structures, leading further into a maze deep underground. 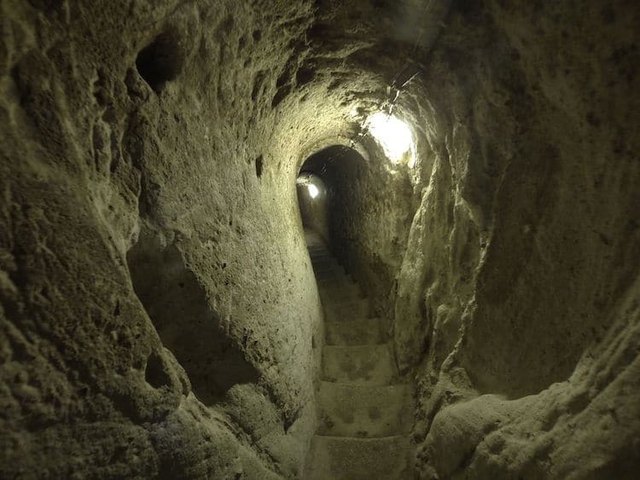 The secret passage leads into a labyrinth deep underground.

Along the way, researchers have found an 18-storey ancient city with diverse architectural styles including: houses, churches, food storage, weapons storage areas… and even even a school. This underground city has more than 50 ventilation shafts designed to bring air down from above and thousands of smaller ducts distributed throughout to let the air out.

Derinkuyu also has about 600 doors connecting the areas. The ancients used large rotating disc-shaped stones with a small hole in the middle to make doors. They can only be opened and closed from the inside, so the residents of this city can take full control.

And yet, this mysterious underground city also has a system of safe water storage. Wells in the city are designed not to connect with each other and not all of them go to the surface. This will help protect residents from invaders who can poison the entire water system from the outside. 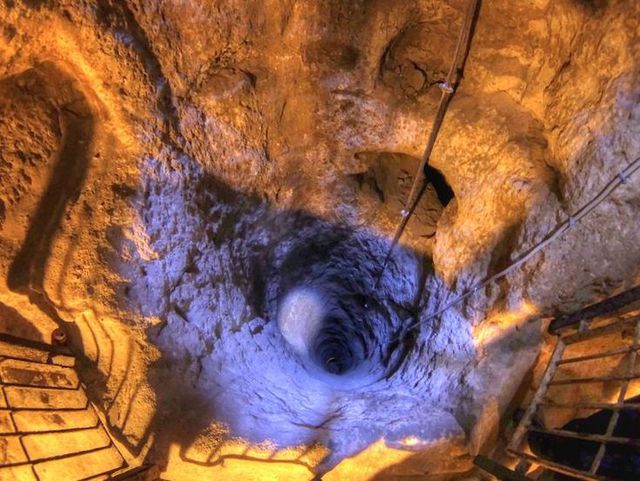 Obviously Derinkuyu Underground City is the perfect plan for a self-sufficient underground life and in case of unforeseen circumstances. In addition, the ancients also designed this city according to the architecture to help people avoid the weather being too hot in the summer and too cold in the winter. Underground, the temperature throughout the year is stable at around 13°C, providing a cool environment for livestock, maintaining a fresh water supply, and keeping food fresh.

The year this mysterious underground city was born and who built it are still unknown. However, based on the collected data, researchers have hypothesized that Derinkuyu was built in 780-1180 BC by the Phrygians. 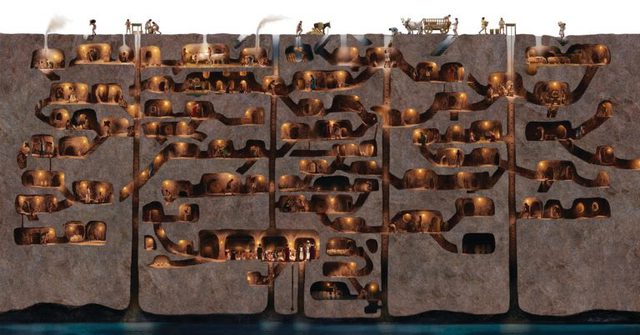 The diagram shows several floors of Derinkuyu’s 18-story underground city, of which only eight are open to the public.

Then, this land of Cappadocia appeared in turn, the Persians, Greeks, Macedonians, Armenians… In addition, they also believe that there is an 8 km long passage connecting Derinkuyu with another underground city, Kaymakli. This shows that there was cooperation between different civilizations in this Cappadocia region.

It can be seen that the architecture in Derinkuyu, although “simple” and quite primitive, has existed for nearly 2,500 years. Although scientists have only excavated half of the city, the uniqueness and mystery of this place still attracts many tourists from all over the world to explore. Derinkuyu has now become a famous tourist destination in Cappadocia and contributes significantly to the uniqueness of tourism in Turkey – a land that still retains countless cultural and historical imprints.