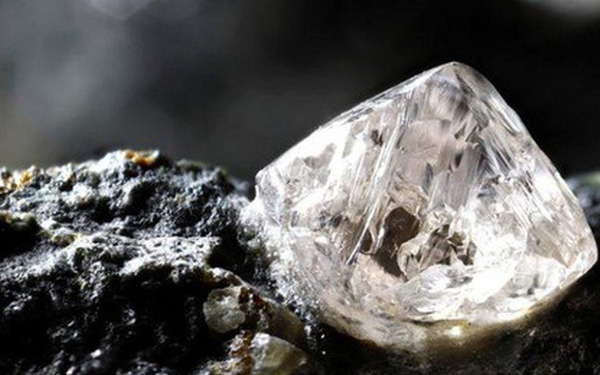 Another form of CaSiO3, known as wollastonite, is commonly found around the globe, but davemaoite has a crystalline structure that forms only under high pressure and temperature in the Earth’s mantle, Earth’s mostly solid layer. trapped between the outer core and the shell.

Davemaoite has long been expected to be an abundant and geochemically important mineral in the Earth’s mantle. But scientists have never found any direct evidence of its existence because it decomposes into other minerals as it moves towards the surface and the pressure decreases.

However, analysis of a diamond from Botswana, which formed in the mantle about 660 kilometers above Earth’s surface, revealed an intact sample of davemaoite trapped inside. As a result, the International Society of Mineralogy has now confirmed davemaoite as a new mineral.

Tschauner and his colleagues discovered the davemaoite pattern using a technique known as synctron X-ray diffraction, which focuses high-energy X-ray beams at certain points inside the diamond with high precision. very small precision. The davemaoite sample inside the diamond is only a few micrometers (millionths of a meter), so less efficient sampling techniques will miss it.

Davemaoite is thought to play an important geochemical role in the Earth’s mantle. Scientists theorize that the mineral may also contain other trace elements, including uranium and thorium, which release heat through radioactive decay. Therefore, davemaoite can help generate a significant amount of heat in the mantle.

“The discovery of davemaoite suggests that diamonds may form further in the Earth’s mantle than previously thought, and it suggests they may be the best places to look for new minerals,” said Tschauner. from the mantle.”

According to Live Science