At last week’s shareholder meeting, billionaire Warren Buffett made a controversial speech when he said Bitcoin has no value and he would not buy it even if they cost $25. Many other investors have voiced this view, including venture capitalist Marc Andreessen.

On his personal Twitter page, Andreessen commented: “It’s a myth that he said this while having diabetes”, referring to Buffett showing up at the meeting with boxes of See’s Candies around. See’s Candies is also a brand owned by Berkshire.

Buffett, who is currently the sixth-richest person in the world with a net worth valued at around $116.8 billion by Forbes, said he opposes bitcoin because it is not a tangible asset like real estate or other assets. other business areas.

Buffett thinks he’s willing to pay $25 billion for 1% of farmland, or 1% of apartment buildings in the United States. But someone owned all the Bitcoins in the world and offered to buy it for $25, he didn’t accept.

“I don’t know what to do with them and will have to sell them one way or another. They won’t make anything. While apartments can be rented, land can become farms. produce food,” billionaire Warren Buffett commented.

As a cryptocurrency advocate, Elon Musk did not directly share Buffett’s views. However, the Tesla boss commented on Andreessen’s tweet: “He said ‘Bitcoin’ many times”, with a laugh “haha”, referring to the owner of Berkshire Hathaway who is opposed to Bitcoin, but accidentally mentioned the phrase. this word many times. 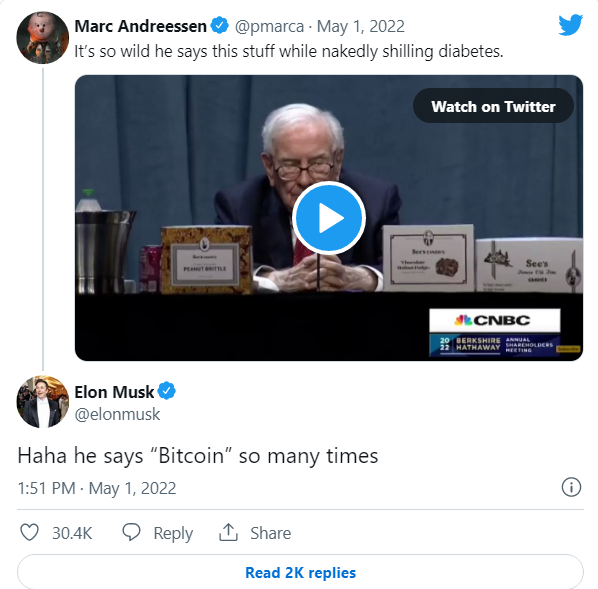 This tweet of Musk received more than 30,000 likes and thousands of responses after a day, including Bitcoin “shark” Michael Saylor – founder of Microstrategy. “Everybody can’t stop talking about Bitcoin,” agrees Saylor.

Last month, the Tesla boss, who acquired Twitter for $44 billion, floated the idea of ​​having Twitter users pay their monthly subscription in dogecoin.

This isn’t the first time Musk has commented on Buffett. In 2021, he taunted Buffett after becoming the richest person on the planet, saying Buffett should invest in his company if he wants to keep up in terms of net worth.

Previously, Warren Buffett rated Elon Musk as a person who can upset some areas, but there is still room for improvement and should be selective when tweeting.

The two billionaires have opposing views on cryptocurrencies. Musk said he owns Bitcoin, Ethereum and Dogecoin, and constantly mentions Dogecoin on his personal page. Meanwhile, Buffett criticized Bitcoin as “rat poison”, and insisted that he would never own any cryptocurrency.

For years, investors have wondered how to value Bitcoin, in part because of its potential to serve various uses. In Western markets, Bitcoin has been seen as an investment asset, especially as exchange rates and inflation rise. In other markets, investors still see great potential for its use as a digital currency.

Even recently, the National Assembly of the Central African Republic, a country located in central Africa, unanimously passed a bill to officially recognize Bitcoin as a national currency. With the passage of the bill, people in Central Africa can use Bitcoin to conduct daily transactions, similar to a regular currency.

Previously, in June 2021, El Salvador became the first country in the world to consider Bitcoin as a legal currency and used in tandem with the USD (this country’s official currency), allowing people to use Bitcoin for daily transactions such as buying goods, paying taxes, paying bills, etc.