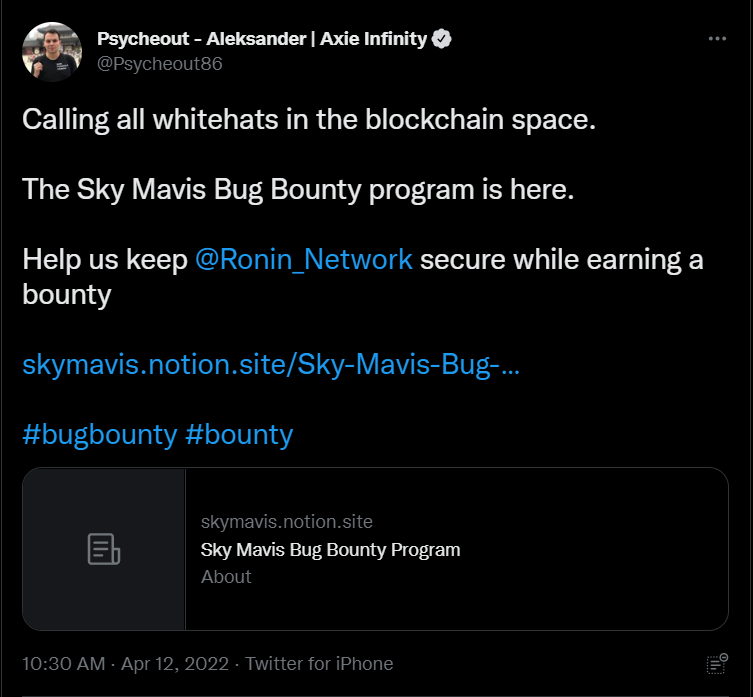 The reward for detecting bugs can be up to 1 million USD. However, instead of paying in cash, this reward will be paid in the form of AXS tokens, which unlock after 6 months.

This is considered a move to strengthen the security of Sky Mavis after the Ronin bridge attack on March 29. This is the most damaging cryptocurrency attack in history when it lost up to 622 million USD in cryptocurrency.

Sky Mavis then held a funding round of 150 million USD with the participation of many large organizations such as Binance to fulfill its commitment to compensate all users affected by the attack. Also last week, Sky Mavis launched Axie Infinity: Origin version with many new improvements in gameplay, graphics, card effects and additional items.

Axie Infinity: Origin version had to be delayed 1 week after the attack on Ronin Network

Meanwhile, hacker Ronin is continuing to spread the amount of tokens appropriated from the attack via Tornado Cash. As of April 12, the hacker has transferred more than 21,500 ETH (worth over $60 million) to this mixer to erase the transaction traces. The hacker wallet still has more than 151,000 ETH (equivalent to about 460 million USD).

Cryptocurrency, commonly known as “virtual currency”, has not been recognized by law in Vietnam.

GameFi (short for Game + Finance) is a term that refers to games built on blockchain that incorporate financial elements. The information in the article is for reference only and has no investment recommendation value.