Stylish design but no less elegant

When it comes to gaming laptops, we often think of products with aggressive and personality designs, but not really suitable to affirm a professional attitude at work. The design of the MSI Alpha 15 is a perfect blend between these two extremes that seem to have nothing in common.

Instead of using flashy colors or cumbersome lines, the Alpha 15’s minimalist black aluminum shell exudes a noble and classy appearance. Therefore, users can confidently bring this machine into the meeting room without worrying about peer scrutiny.

However, MSI still brings unique touches to the Alpha 15 such as angular textures and the Loi Dieu logo on the lid, or large heat sinks on the side and bottom that both enhance heat dissipation and create so strong. Besides, users can also freely adjust the color of the keyboard backlight, which is also an effective way to express their own style. 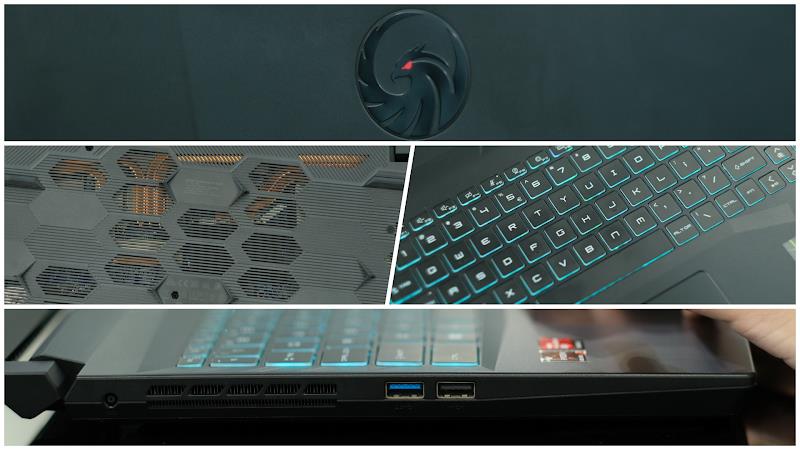 AMD Advantage is a set of standards built by AMD to provide a superior user experience, especially for gamers. Not only includes the “matching duo” of AMD Ryzen and AMD Radeon to provide a smooth gaming experience, AMD Advantage also requires other elements such as 3200Mhz DDR4 RAM, NVMe SSD, FreeSync Premium monitor with 144Hz refresh rate, more than 10 hours of battery life… These are obviously very strict standards that only excellent all-round laptops can achieve.

Favored by MSI with the most advanced technologies, the Alpha 15 is one of the few laptops that meet AMD Advantage standards. In particular, the focus is on the high-end CPU and GPU duo from AMD: Ryzen 7 5800H and Radeon RX6600M. 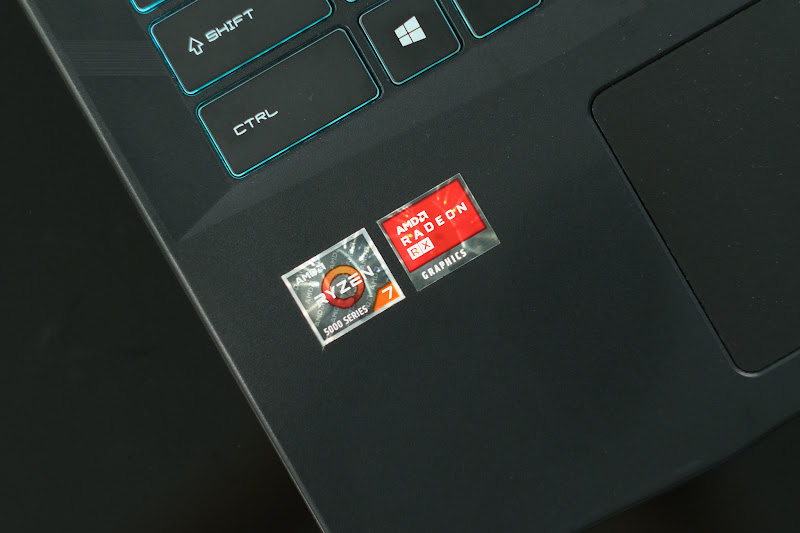 Based on the Zen 3 architecture with 8 cores 16 threads combined with the optimized 7nm process, the Ryzen 7 5800H delivers superb performance while preserving long battery life and cool temperatures. Radeon RX6600M uses Navi 23 cores based on the latest RDNA2 architecture, supporting many technologies such as Ray-tracing to enhance lighting effects, FidelityFX to enhance sharp graphics, or Radeon FreeSync to improve smoothness and suppression tearing (tearing) inhibits gamers. With 8GB more VRAM than the competition, the Radeon RX6600M is also future-ready for high VRAM demanding games.

Ryzen 7 5800H and Radeon RX6600M separately are already very powerful, but when combined they are like “tiger growing more wings” thanks to exclusive technologies from AMD Advantage. AMD Smart Access Memory allows the CPU to access data directly from the GPU’s vRAM (instead of going through system RAM) to minimize latency. Meanwhile, AMD SmartShift intelligently analyzes user tasks to optimize performance, such as focusing energy on the GPU when playing games, or prioritizing the CPU in work tasks like rendering.

Worthy of a high-class CPU and GPU duo, the MSI Alpha 15 uses DDR4 3200Mhz RAM for 10% and 35% faster read and write speeds than 2666Mhz RAM, along with a super-fast NVMe SSD. Better yet, during long-term use, users can completely upgrade RAM or SSD extremely easily. 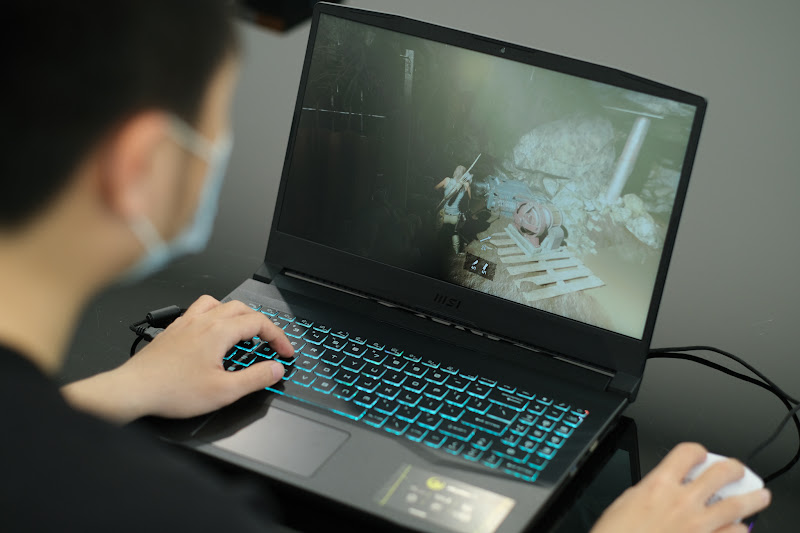 To maintain peak performance during gaming, MSI Cooler Boost 5 cooling technology with 2 fans and 6 large diameter heat pipes will continuously cool the system. One of the requirements of AMD Advantage is that the palm rest temperature should always be below 40 degrees Celsius, and so users can comfortably use the MSI Alpha 15 for a long time without feeling uncomfortable.

Fully equipped for a complete experience

Of course, as a gaming laptop, it is indispensable for a high refresh rate screen. MSI Alpha 15’s 144Hz screen makes every movement smoother and is a great advantage for gamers, especially with FPS fighting games. In addition, due to the application of IPS technology, so even when using the machine to work, users will still feel advantages such as bright colors, wide viewing angles and relatively good contrast. 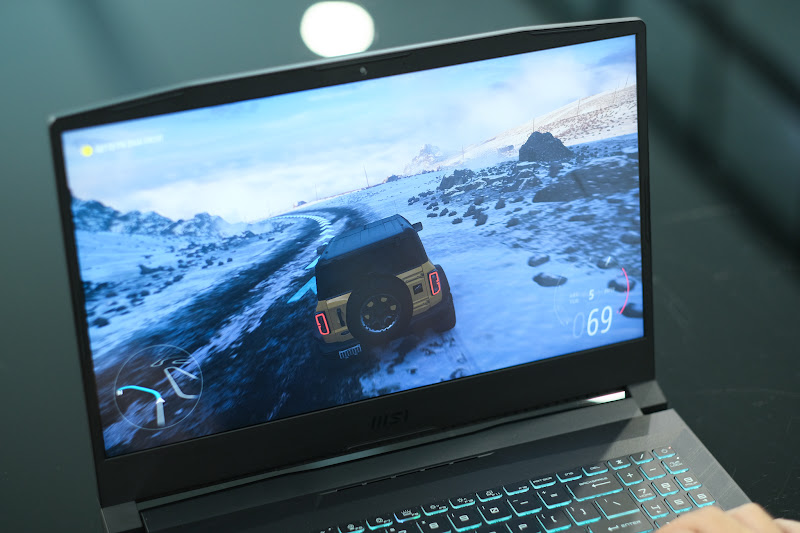 Not only “pleasant eyes”, MSI Alpha 15 also makes users “have ears” thanks to Hi-Res Audio standard that delivers highly detailed sound, whether when playing games, listening to music or watching movies. Exclusive Nahimic technology, which MSI collaborates with gaming giant SteelSeries to deliver a vivid 3D surround sound experience, along with effective noise cancellation technology when recording is extremely useful when livestreaming or voice chat mixing with teammates.

Despite its very powerful configuration, the MSI Alpha 15 still achieves great battery life thanks to its 90Wh battery capacity, which is among the largest in its segment. Combined with the power-saving 7nm chip and AMD Advantage’s proprietary technology as mentioned above, the MSI Alpha 15 achieves at least 10 hours of use according to AMD’s standards, a respectable number for a user. gaming laptop model.

MSI Alpha 15 – Comprehensive for both work and play

With what MSI brings to the Alpha 15, it can be seen that this is a harmonious laptop model in all respects. Essentially a gaming laptop model, Alpha 15 promotes the inherent strengths of this model with powerful configuration, high refresh rate screen and effective cooling system.

But, MSI was smart not to let the Alpha 15 go into the “rut” often found on other gaming laptop models with its too ostentatious design, low battery life or power-hungry processor. Instead, MSI was able to balance the factors to make the Alpha 15 not only an ideal machine for entertainment, but also suitable for work.

Get Lei Dieu now when owning a MSI Gaming laptop with AMD Ryzen 7 5800H chip & many promotions when ordering from April 1, 2022.