Finally, it’s almost Christmas! Although we know that Santa Claus is not real, but even adults or children, surely everyone wants to receive gifts from him on Christmas day. So during this festival, why not try “connecting” with “Santa Claus ShopeeFood”. Surely there will be many surprises and interesting things for you.

Don’t worry about being lonely all year round, because ShopeeFood Santa is always there when you need it 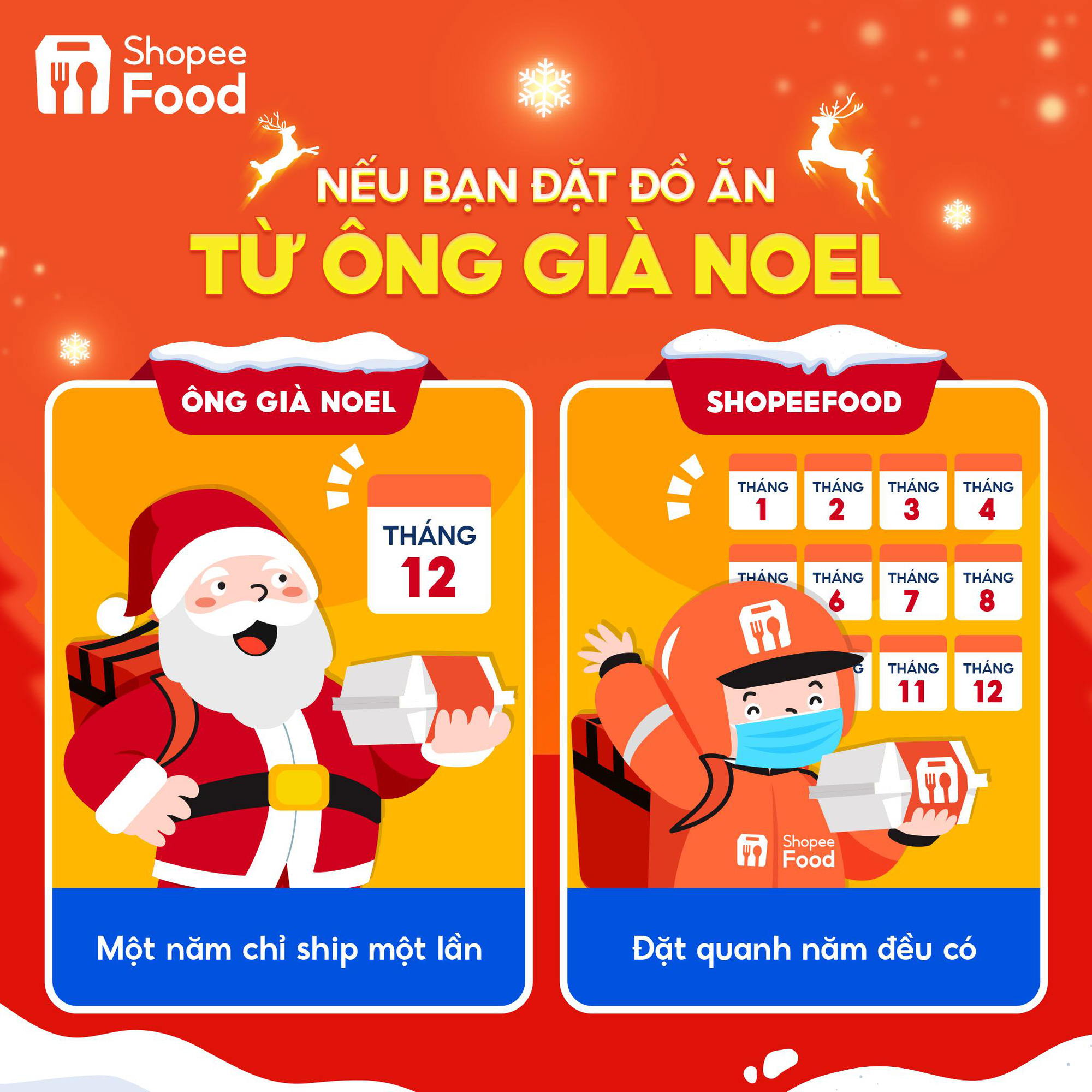 If you can only meet “real” Santa on a single day of the year, with ShopeeFood Santa Claus you can meet all year round all month long. The only thing you need to do is click on the “Place Order” box of the ShopeeFood application on Shopee and… 15 minutes later, Santa Claus will appear at your door. Not to mention, Santa “real” only comes at midnight on December 24, and Santa ShopeeFood is always with you on all “time fronts”. Whether you crave food at 5am or crave a cup of milk tea at 11pm, as long as you want, he is there. Although it’s a bit “mixed”, but Santa Claus ShopeeFood is also very thoughtful and attentive, isn’t it! 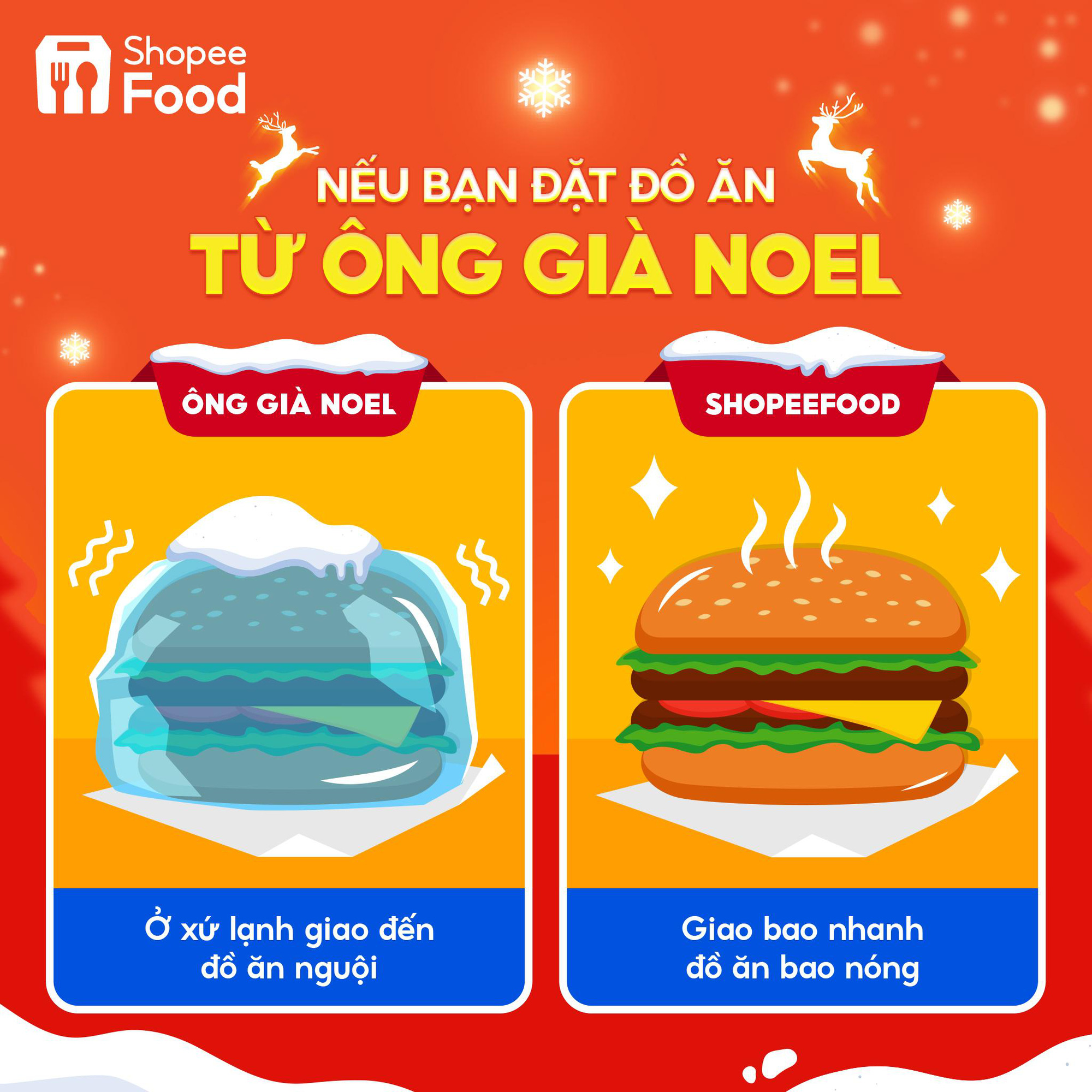 For food enthusiasts, expecting a gift of a delicious, hot meal from Santa Claus is also considered heartwarming in this cold weather. With a remote geographical distance, this is quite difficult for “real” Santa. But, with Santa Claus ShopeeFood is not. Even though your address is 123/12/67/26, street number 261, alley 345, national highway 789, he still found and delivered the package of smoked food. If you don’t believe it, order it and see.

No need to be fussy about the chimney, Santa Claus ShopeeFood will meet you in the simplest way 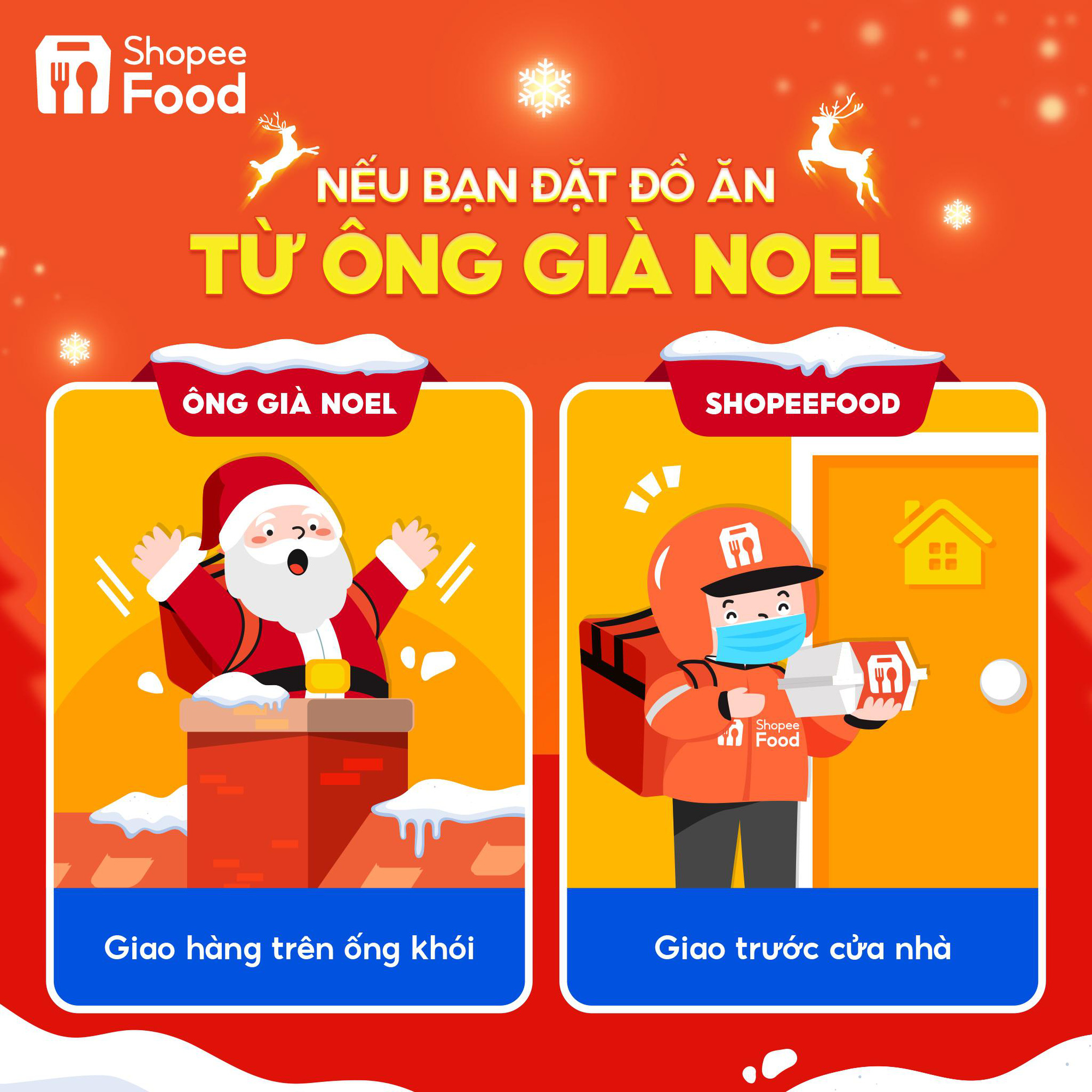 Surely everyone has wondered how Santa Claus entered the house without a chimney. With ShopeeFood Santa Claus, it’s much simpler. You just need to sit at home, watch your phone, when he comes he will call and stand in front of the door to give you a “gift” that is both delicious and delicious. Therefore, the feeling of receiving a gift from Santa Claus is also “real” more than a billion times.

It’s Christmas, Santa ShopeeFood will definitely have a gift for you 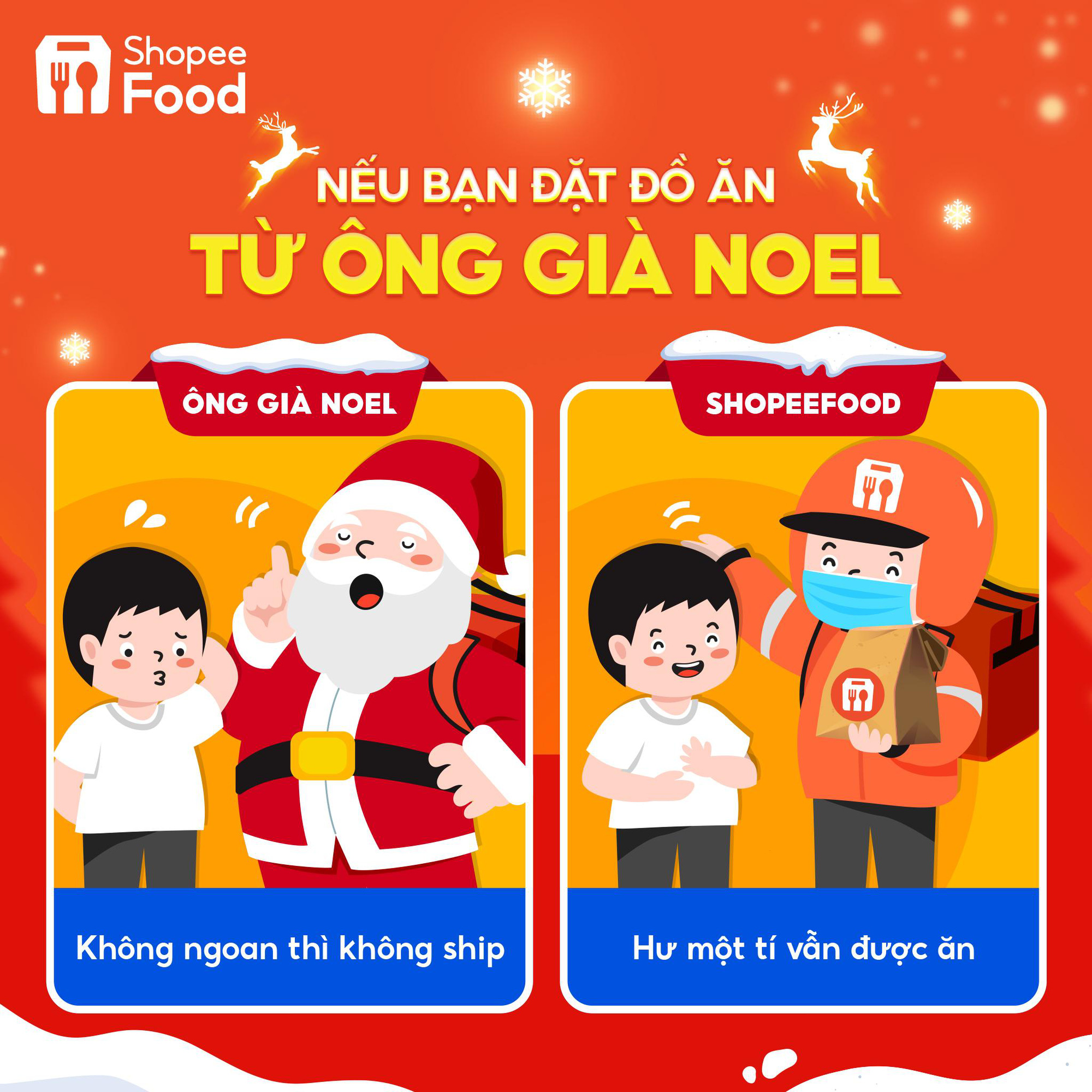 No need to worry about the “dignity test”, with Santa ShopeeFood it is already Christmas, you will definitely have that gift. This part is important, so let ShopeeFood remind you.

From December 13 to December 25 in the event “Beautiful Price Party – Merry Christmas”, ShopeeFood brings a “rain” of deals, order from only 1,000 VND, jubilant freeship, countless 50% discount vouchers and many more Other meaningful activities to bring the best choice for your Christmas gift for everyone or simply for you to comfortably organize a house party on this occasion without having to worry about “wallet pain”.

More specifically, on December 24 and December 25, users when accessing the Shopee application select the ShopeeFood icon and order food directly on the application, you will have the opportunity to hunt for discount vouchers up to 75,000 VND in 10 golden hours. : 0H – 7H – 8H – 9H – 10H – 11H – 13H – 15H – 17H – 19H. In addition, on December 24, ShopeeFood also thoughtfully gives you a gift of a collection of “0D Christmas Party – Freeship familiar shop” with a variety of food and drinks priced at only VND0 and free shipping. . 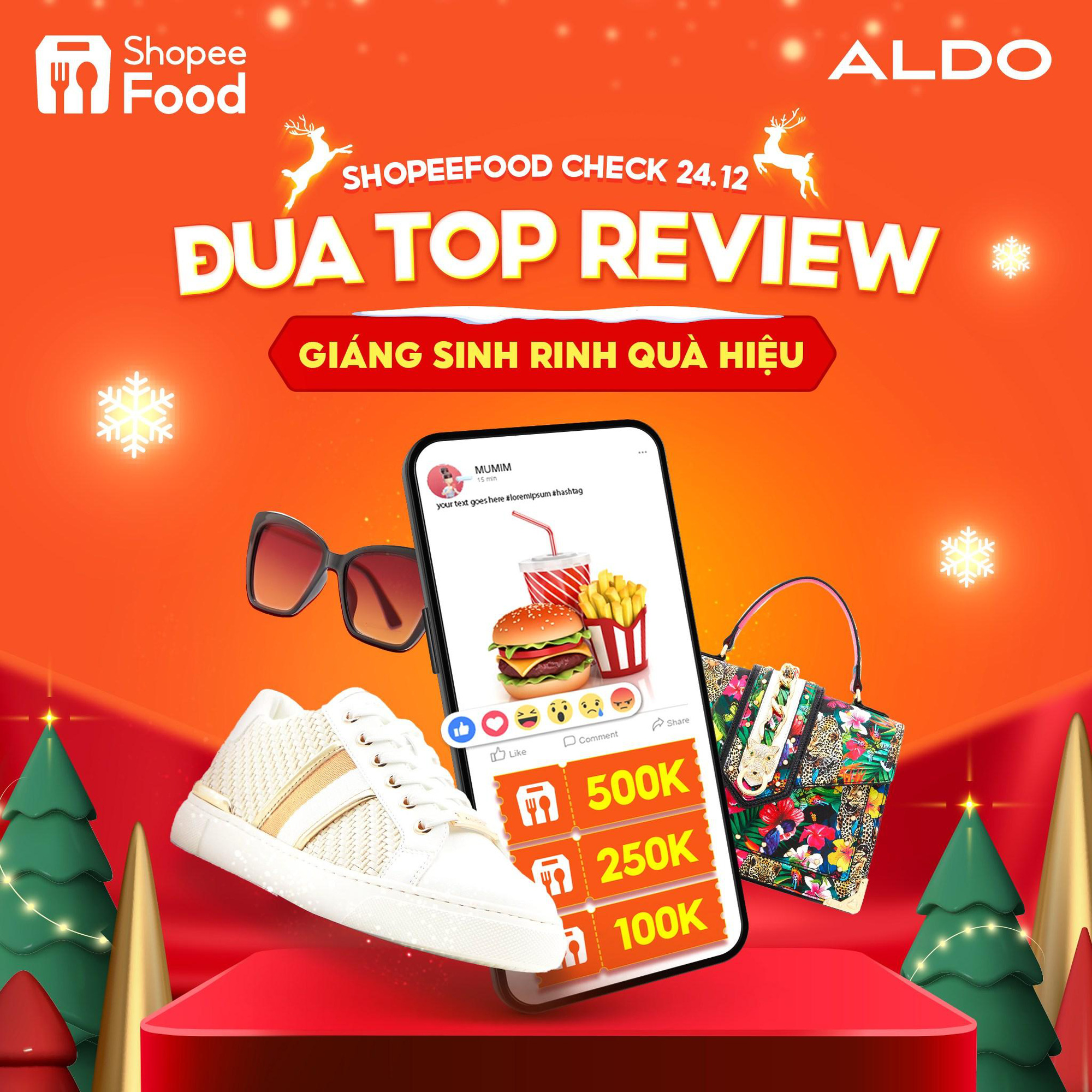 And that’s all, not only delicious food Santa Claus ShopeeFood also gives you a good gift, an ALDO e-voucher set – a famous Canadian fashion brand worth 500,000 VND when participating in the contest “Race top review – Christmas branded gift” on ShopeeFood VN facebook page too. The contest rules are very simple, you just need to review any ShopeeFood order and post it in public mode. The opportunity to receive thousands of gifts from Santa Claus ShopeeFood all year round is only once, so don’t miss it.