“Touching” for the first time 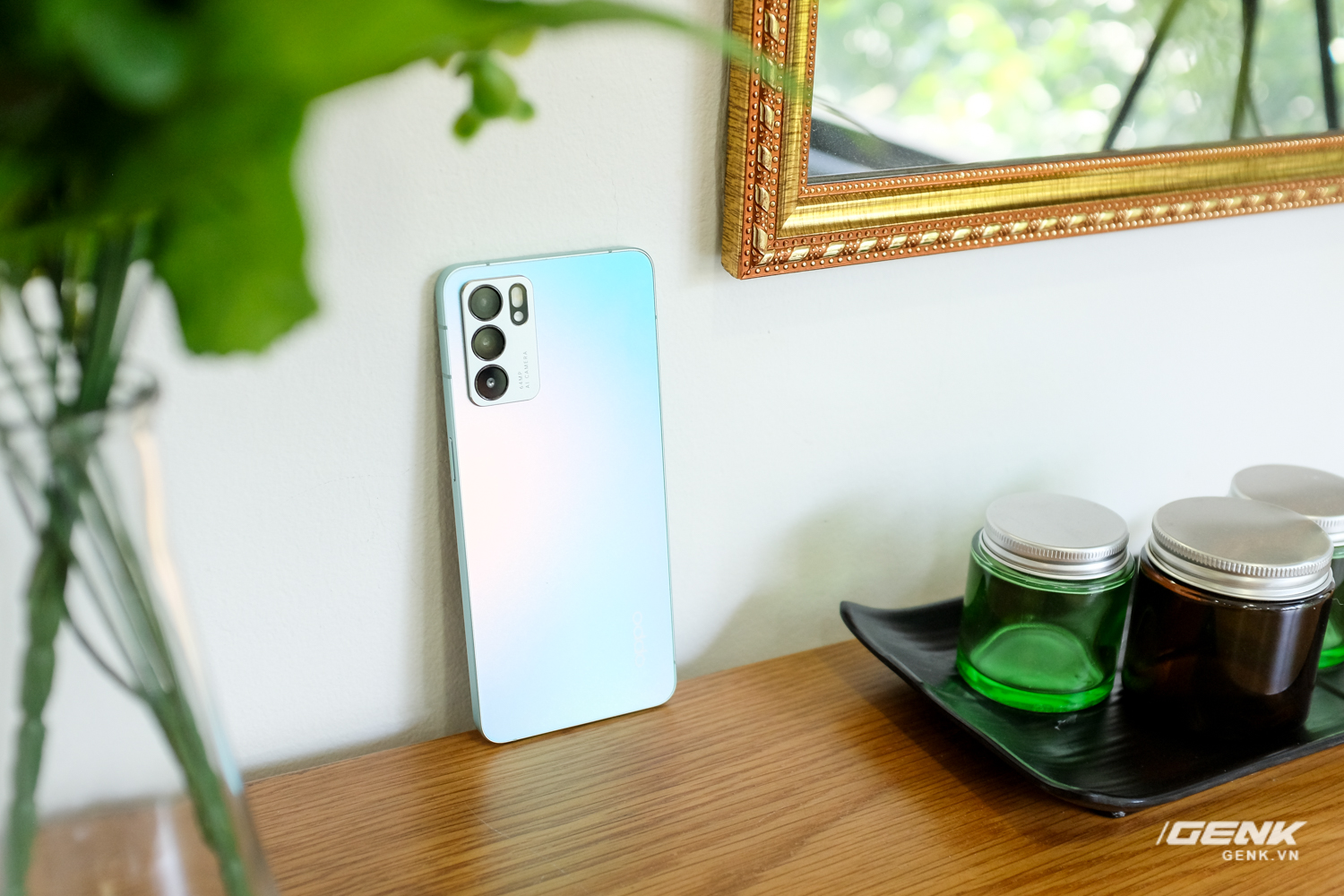 Reno6 5G has to be said to have a rather “unusual” design with OPPO. Users have so far been so familiar with the round OPPO smartphones, the back is beveled on both sides and the screen also has curved edges. Reno6 5G is the complete opposite, the device has a square design, the back is completely flat (except for a slight protrusion of the camera cluster) and the screen is not curved at all.

Not only with OPPO, but this is also a rare design in the entire Android market, making me think more of the iPhone 12 and iPhone 13. The edges are square, thereby giving a firmer and more “full” grip in the hand, especially when held in landscape orientation to watch movies and play games. The machine is also quite light, along with the edges are smoothed instead of sharpened, so there is no need to feel the need, although in terms of comfort, it is still not comparable to OPPO’s familiar round design. 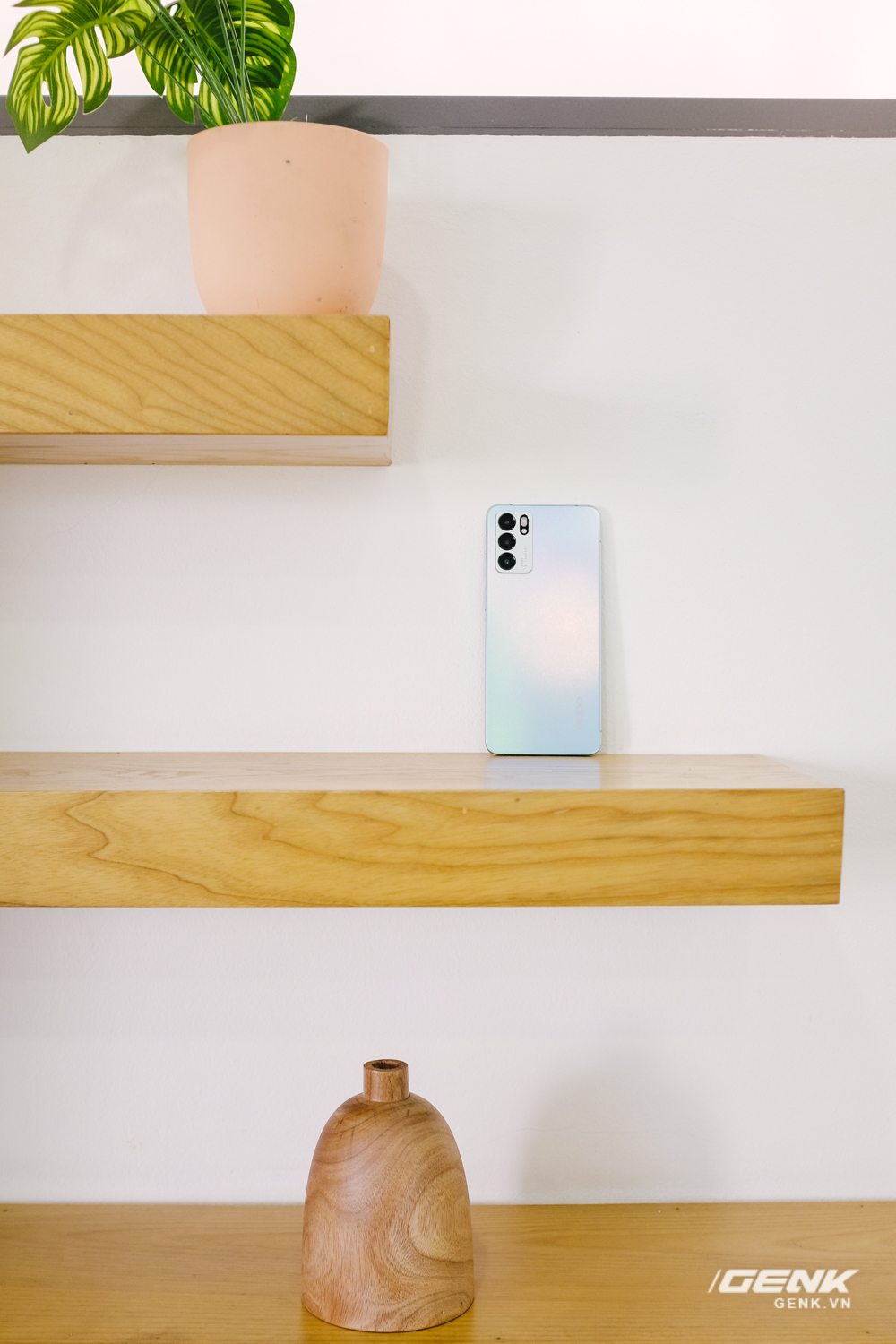 Besides the design, the 2 points that impressed me the most when I first opened the box of this smartphone were the screen and the vibration system. Reno6 5G owns a 6.43-inch 90Hz FullHD+ AMOLED screen, which is not the best screen on the market today, but has done well in many things: moderate size, not too large, bold colors but not yellowing and frequency High refresh rate makes the interface smoother. 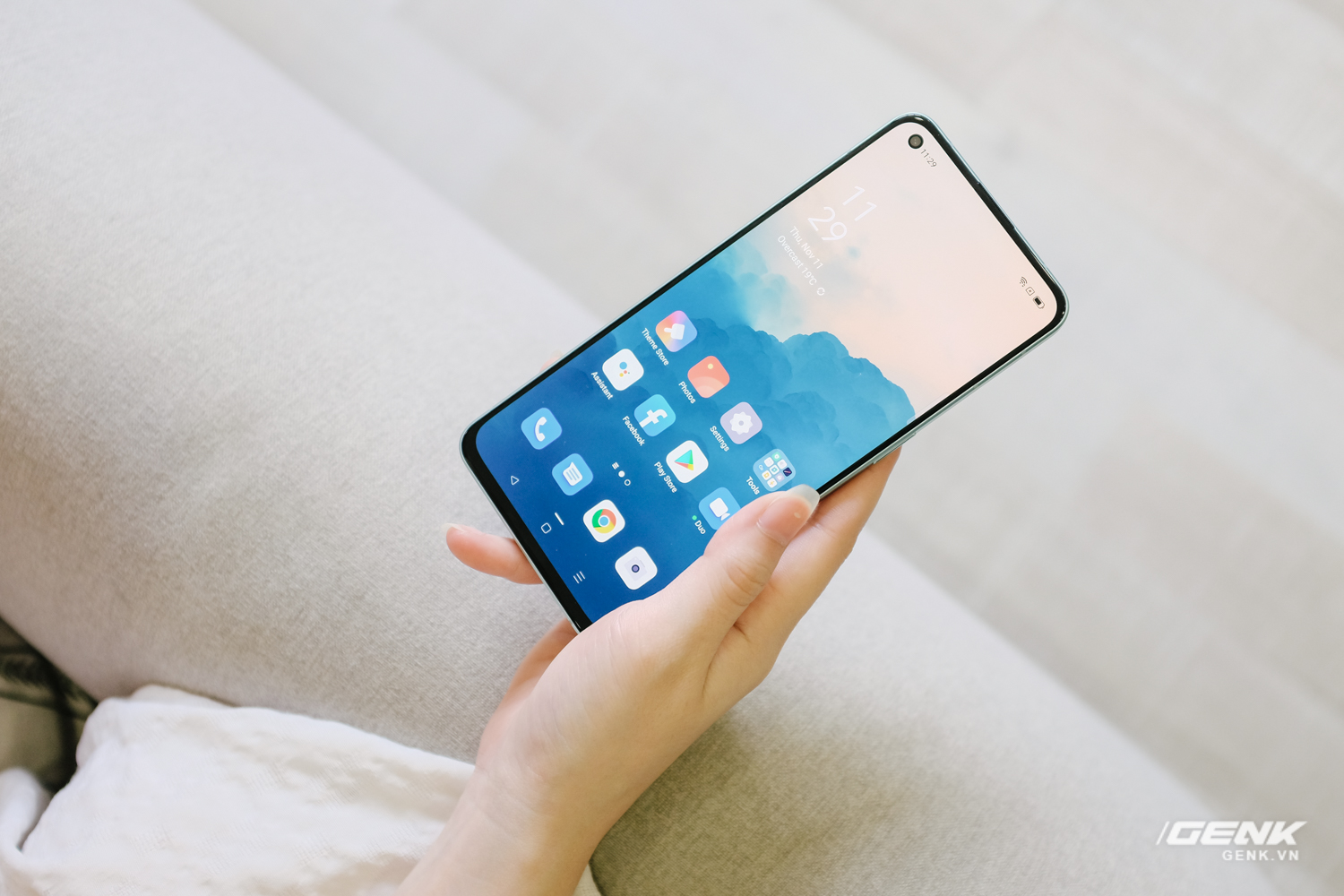 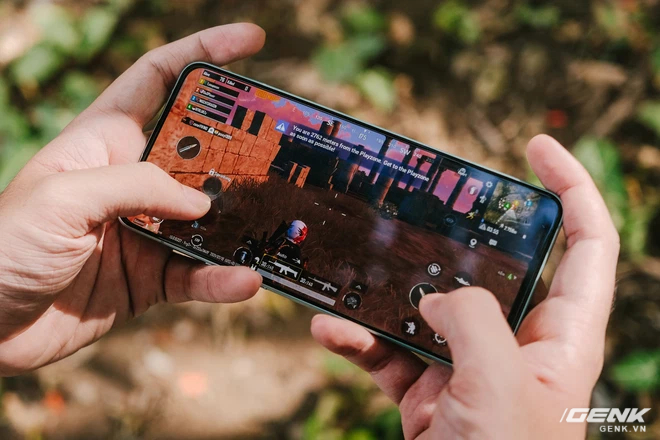 In a week of using with Reno6 5G, what I do the most is… sitting at home playing games. The device is equipped with a Dimensity 900 chip with Mali-G68 MC4 GPU, based on TSMC’s 6nm chain. This is a mid-range processor, for people to easily imagine the performance, it will be between Snapdragon 750G and 778G, with Geekbench Multicore scores of 1820 – 2130 – 2801 respectively. 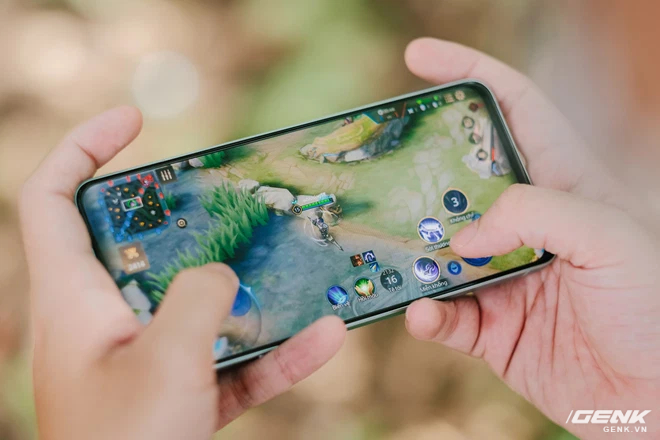 Entering the game with Lien Quan Mobile, I will set the configuration including Super HD Resolution, High Image Quality (1 level lower than the maximum) and Highest Detail Quality. In certain cases such as the appearance of champions with complex skins, we have a bit of lag, but when entering the game, the 60fps level is kept stable and usually does not decrease. 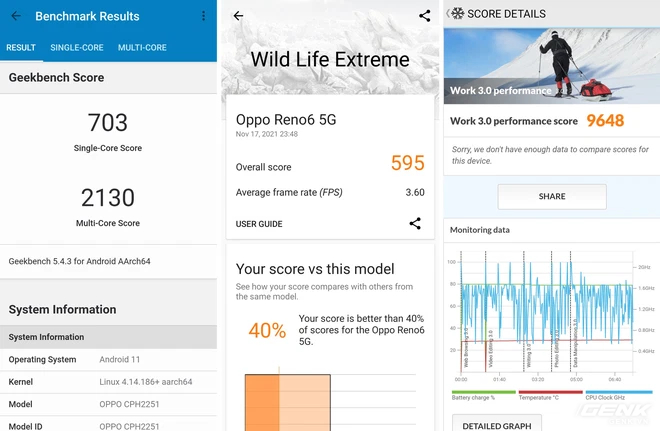 The point I am still not satisfied with the Reno6 5G is that it only has a single speaker on the bottom of the device instead of a dual speaker. When playing games holding the device horizontally, the sound will only come out on the right side, so it suddenly feels deviated, lacking in vividness compared to more advanced smartphones. This is a point that the company can improve in its successors, which can greatly enhance the game and movie experience.

Going to the street to take pictures to save “prison”

Sitting at home forever also felt secret, I invited my friends to take pictures of “virtual living”. Of course, in these shoots I usually bring my camera, but I still have the help of the smartphones I’m using. Reno6 5G is heavily advertised for portrait photography with different font removal effects. 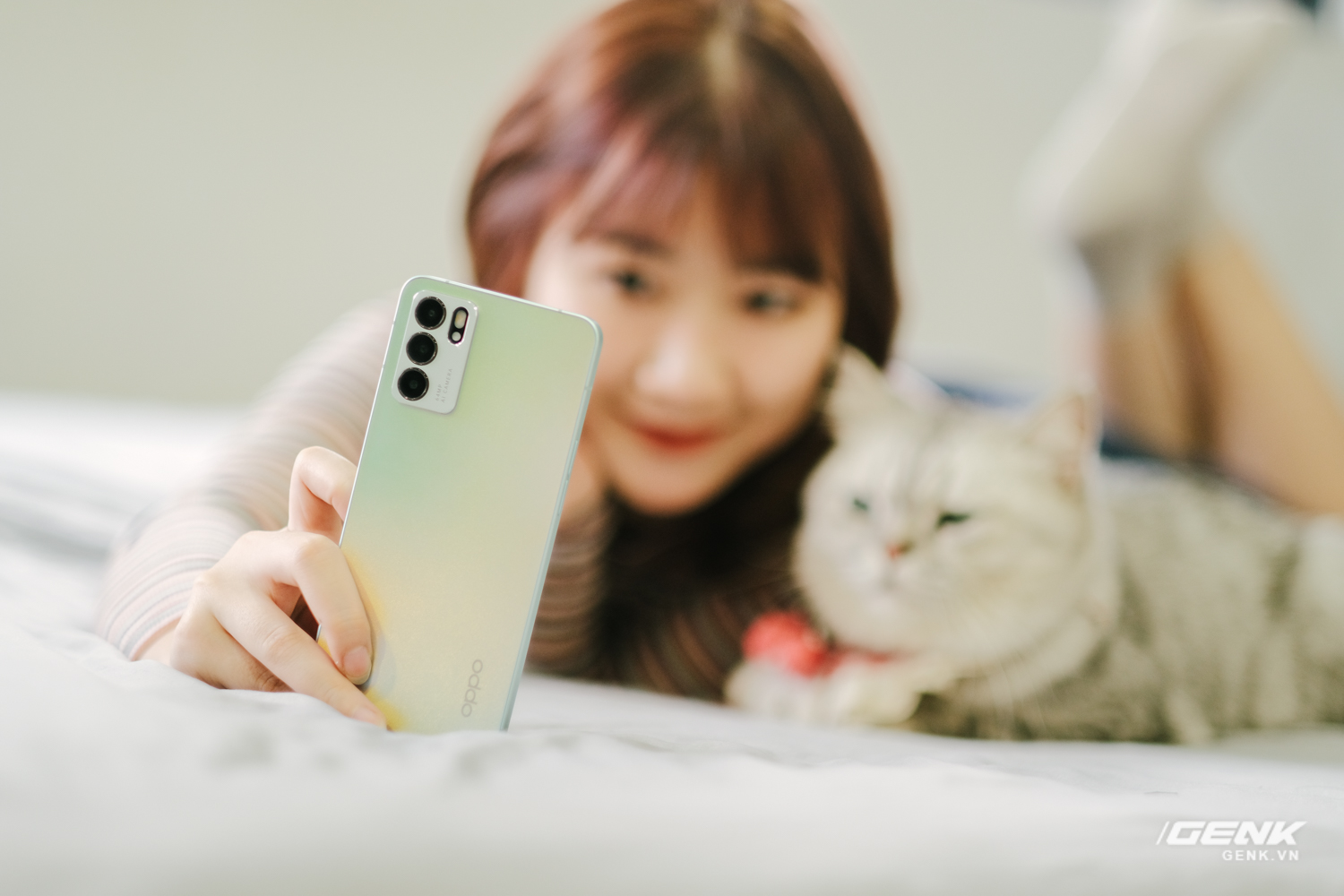 The AI ​​Color Portrait effect seems to be an “evolved” version of the usual bokeh image. The camera will still take depth measurements and then blur things that aren’t people, but will choose to add “blobs” like sunlight through leaves or lights at night to make them bigger, like with a large aperture blur effect on a professional camera. 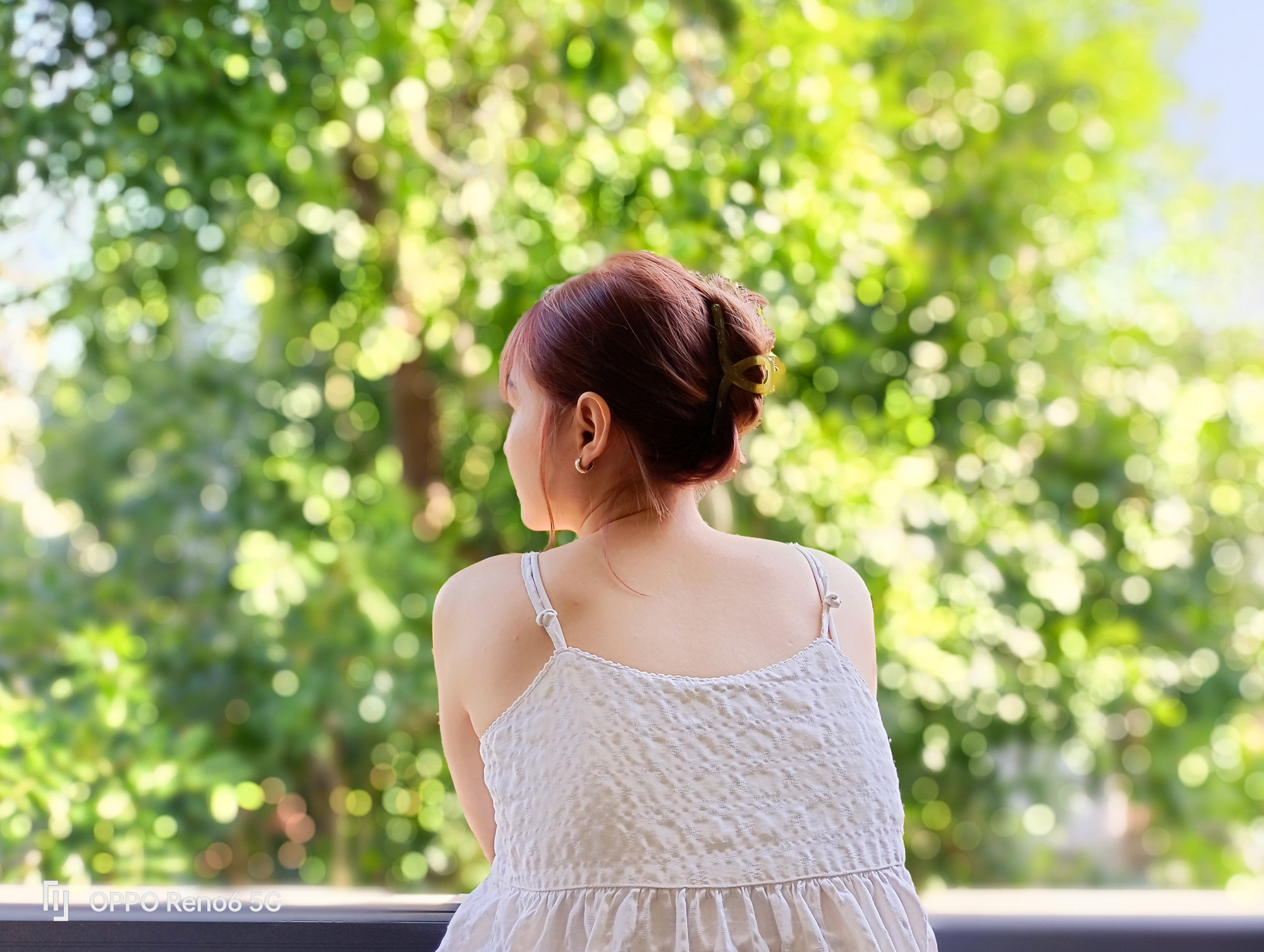 What I like about the Reno6 5G is that the device does not need to recognize the face of the person being photographed to perform the correct background separation. The ability to remove fonts is still difficult to match with professional cameras with “real” physical effects, but if not zoomed in too large plus a large bokeh effect, it is still very convincing. 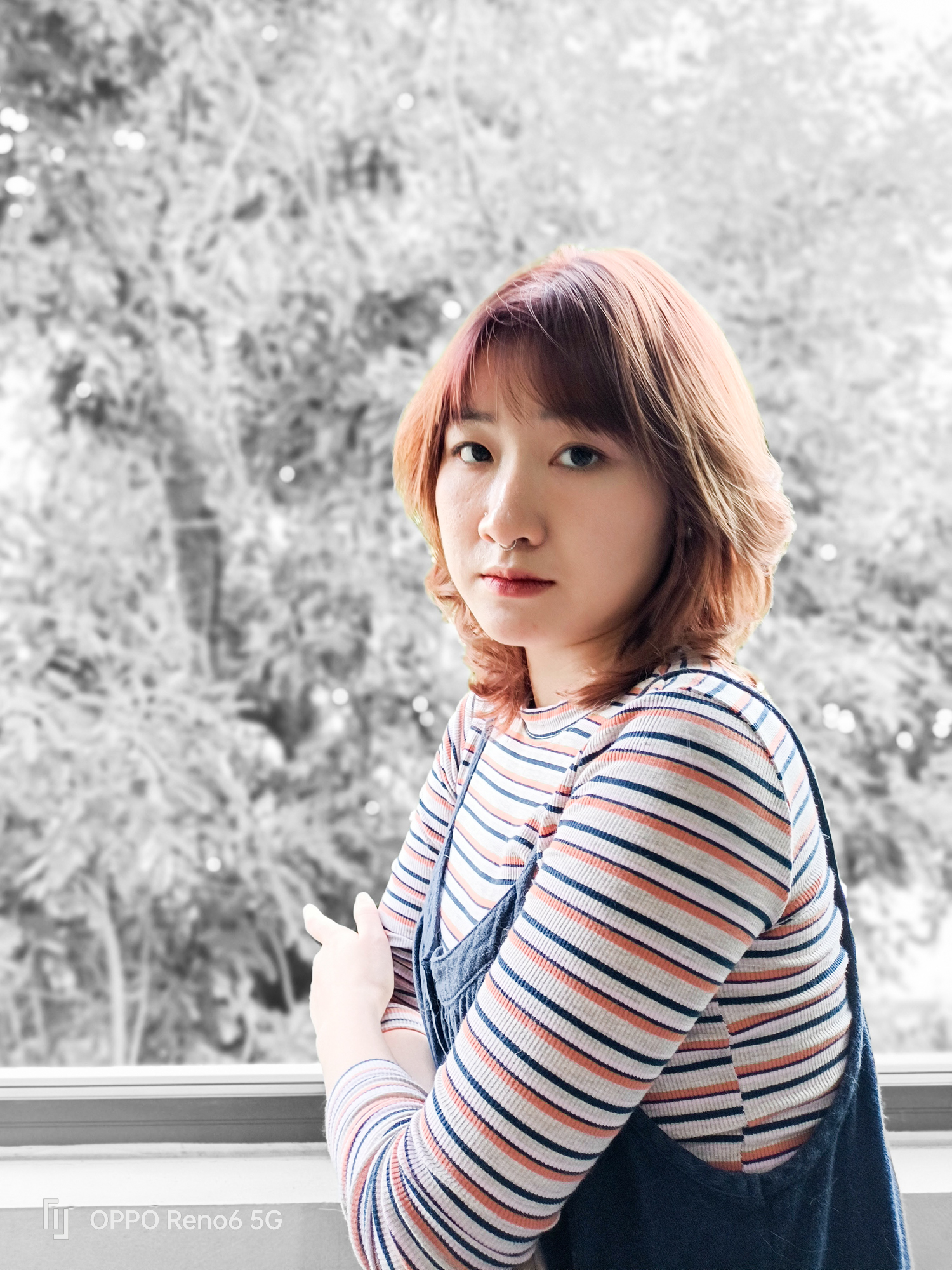 AI color portraits, perhaps looking at the photo you can already understand what the effect is, the machine will only keep the color of the person being taken and let all the other elements in the image “fly away”. The effect of this type of photo looks good, but in my opinion, it should be used sparingly, it will be most effective, too much will become boring.

The weakness of the photography system on the Reno6 5G lies in the fact that the device does not have a zoom camera, so when performing telephoto shots, you will have to zoom electronically from the main camera. With portrait shots, this is not a big minus point, and if you need to zoom, the main camera with a high resolution of 64MP will also handle it at a good level. Contrary to shooting in everyday life, landscapes, adding a 3x camera will still be better. 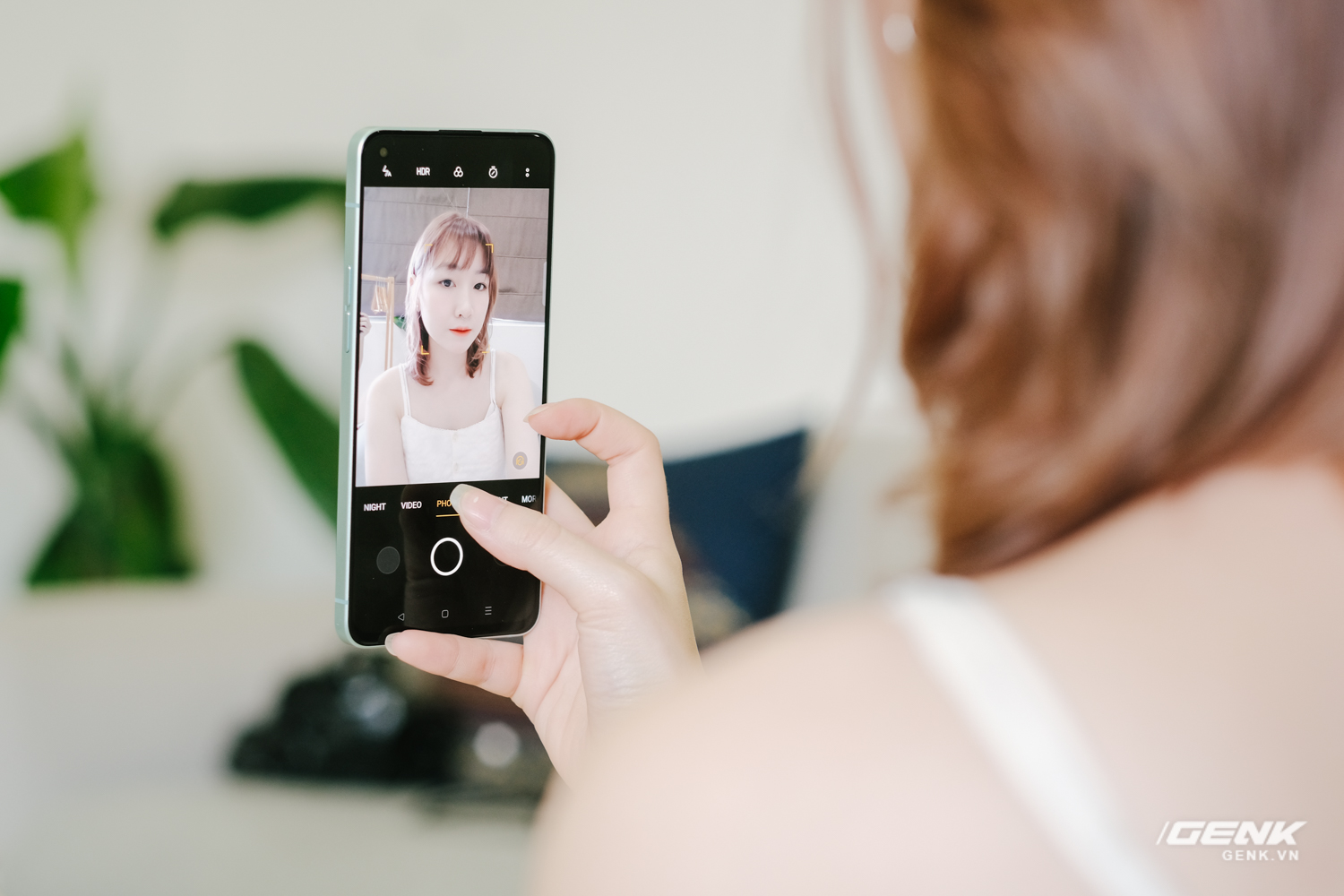 Fast charging “save” in some cases

What I like most about OPPO, vivo or OnePlus products is their fast charging technology. There are times when I am about to leave the house but remember that the device is only 15-20%, with smartphones charging at a slower speed, I will choose the option of using a mobile charger and putting it in my backpack, a bit inconvenient. Reno6 5G with fast charging up to 65W, this problem has been completely solved.

As announced by OPPO and also confirmed by actual use, Reno6 5G fully charges from depleted state to full battery in just 29 minutes. This is the fastest charging speed among smartphones of the same price range, including its predecessor OPPO Reno5 5G which takes up to 41 minutes to do the same. Samsung lags behind quite a bit with the Galaxy A52s 5G, which takes up to 1 hour and 28 minutes to fully charge, and in 30 minutes only charges about half of the battery.

Time to fully charge the battery

With such fast charging capabilities, there are also concerns about the longevity of the battery in the long run. OPPO also added an “Overnight Charging” feature, which reduces the charging speed when plugged in at night to avoid overheating and battery overload. 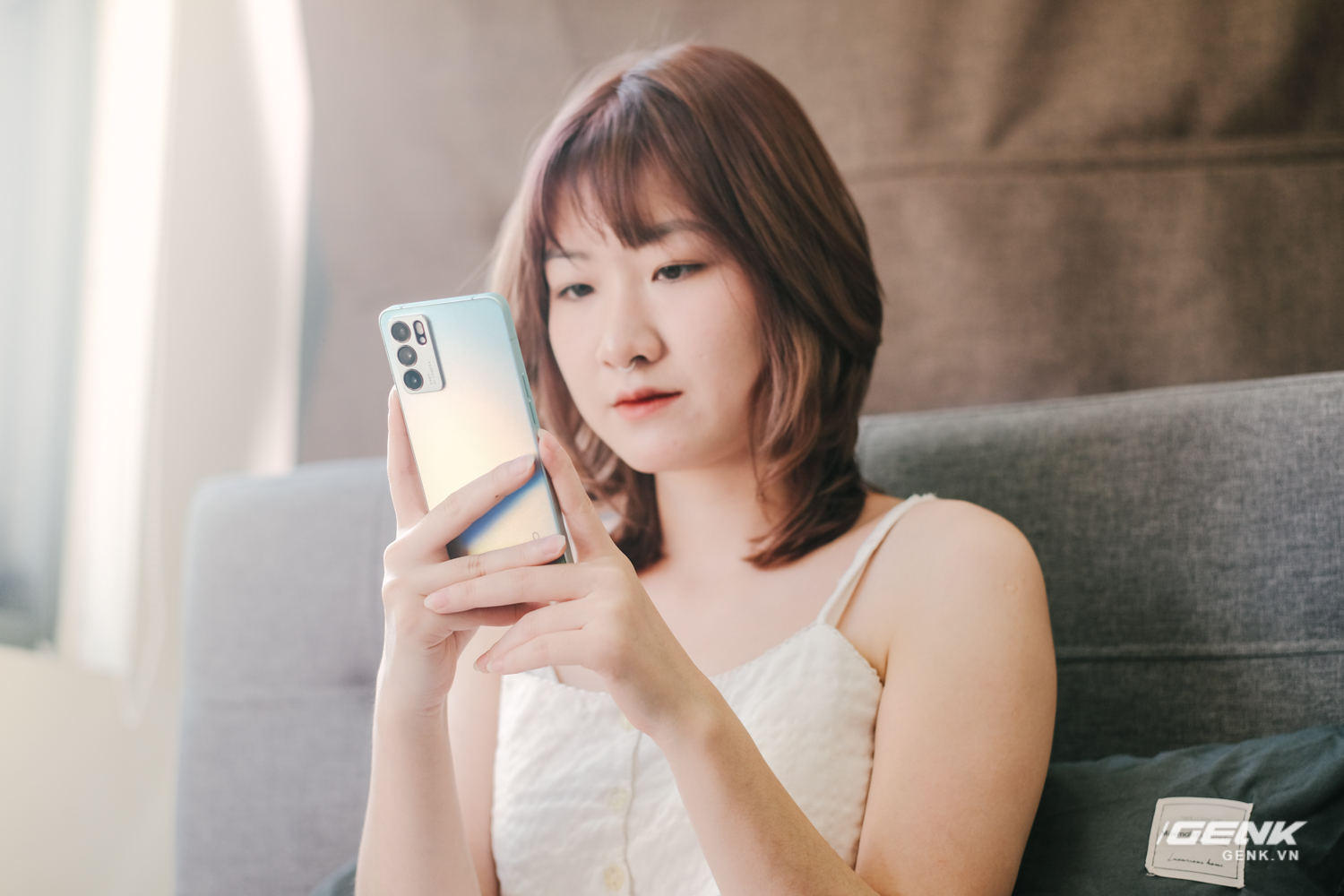 At the time of writing, there have been rumors that OPPO will continue to launch a Reno7 5G version to succeed Reno6 5G. In the 7th version of the Reno series, I want the company to keep the strengths of the 6th generation such as square design (again, very rare in the Android smartphone market), screen and vibration system. High quality, beautiful portrait camera and fast charging. 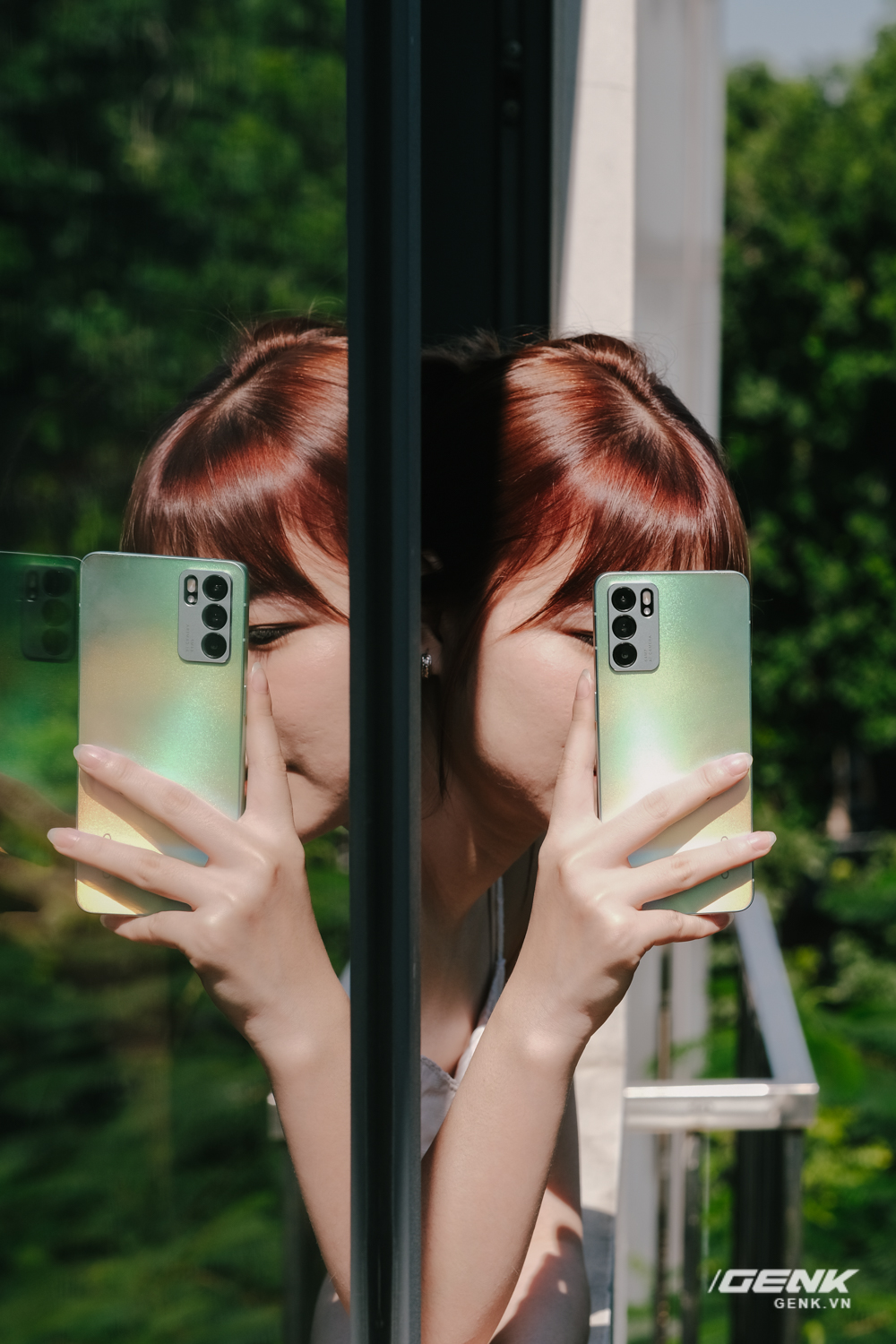 Besides that, solving the biggest problem that I encountered when using this machine is the single speaker. Dual speakers are no longer a feature that only high-end smartphones have anymore, and for those who play games and use external speakers like me, this is indispensable.