You are here: Home / Technology / Using Technology to Create Art – University of Denver

Chris Coleman, an internationally known digital artist who also is a professor in DU’s Emergent Digital Practices program, spent the first part of the summer in about the most idyllic way you can think of for an artist: as part of the Digital Stone Project, a residency in the Italian town of Gramolazzo.

The Digital Stone Project was founded in 2005 by sculptors — among them the late Lawrence Argent, formerly of DU’s art faculty — who wanted to create a new way of working in stone by leveraging digital technologies. Housed in a state-of-the-art technology center equipped with robotic stone-cutting equipment and access to the best sculptural marble in the world, the residency attracts artists from around the world eager to explore the connections between sculpture and digital art.

Coleman spent the better part of a month in Gramolazzo, working on his original piece “Reach An Unprecedented Accord,” a marble sculpture that addresses the idea of borders and our perceptions of what lies on the other side of them. He answered questions for the DU newsroom via email.

Q: How did you become aware of the Digital Stone Project and decide to apply for it? How competitive is it to get accepted?

A: One of my artist friends participated in this residency four or five years ago, and I was instantly intrigued. He recommended it and even went a second time, but because it happens during June, I had to wait until I had a sabbatical to come. Later I found out that Lawrence Argent, our late colleague from the DU art department, had helped to found the project. It is unclear just how competitive it is, because, frankly, it is an expensive opportunity. I would not be able to come without the funding I received from the University.

Q: What interested you about working in stone? Is digital your usual medium? How does the Digital Stone Project allow you to combine the two?

A: My undergraduate degree was in sculpture, and I did several stone pieces during that period. At that time, I was also making digital work but still working out how to combine the two. I still make a lot of sculptural things, but they tend to involve digital aspects or processes. The seven-axis milling machine they have for carving stone here is amazing and opens up really interesting options for your work. I think I did have a really difficult time reconciling the ephemeral nature of most of my work and what it means to make something in marble, known for lasting hundreds of years. 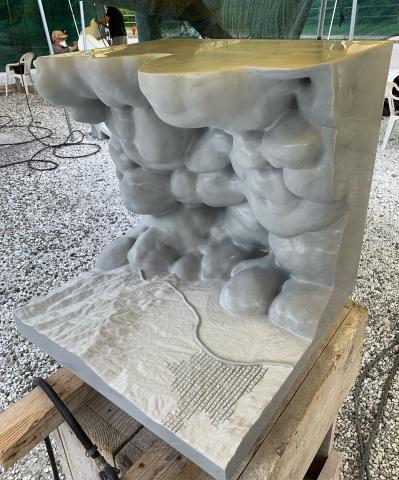 Q: What is your project? How does it address the concept of borders?

A: My project is a sort of landscape, with towering storm clouds rolling in toward an endless wall with a city on the other side. I was interested in depicting the fear that is invoked around borders and walls. There are suggestions that only chaos and evil can exist on the other side, and anything that lives there must be less than human and deserves no consideration or empathy. In the sculpture there is a small break in the middle of the storm where light can come through, a suggestion of something more positive being possible.

Q: How long did you work on the project?

A: I created the 3-D model using open source software over a period of a couple weeks in March and then arrived in Italy June 1 to see the machined block of marble for the first time. My digital file being physical and so large was intense. I remained until June 30, when the 23 people in the residency had an exhibition of the finished pieces.

A: We got to work around 8 a.m. and were all wearing safety gear and tough clothing. We had a bunch of tented areas where our sculptures sat on wooden stands. We used a variety of angle, die, right-angle and pencil grinders with diamond bits and sanding pads. Everything is pneumatic, so you could hear the 20 or so grinders up and down the valley as everyone worked. At 1 p.m. we all walked 15 minutes to a local trattoria, where we enjoyed a local meal and a bit of wine. Then some people took a short break and others got right back to work until about 7 p.m. We ate dinner at 8 and then relaxed with some more wine until we went off to bed at 10 or so. 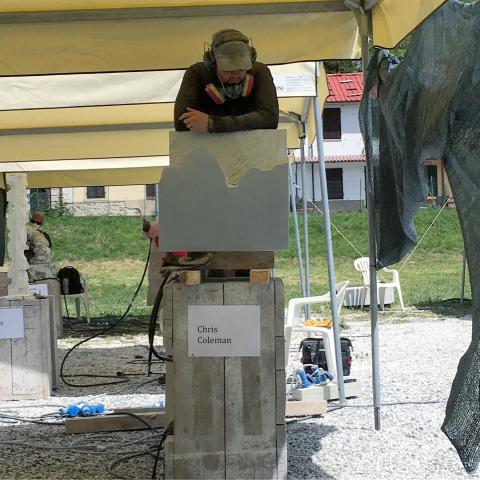 Q: What happened when the project was finished? Was there any kind of exhibition?

A: There was an exhibition at the end in a nearby city known for marble carving. Typically the work will be there for a month or so and possibly travel to another city. Then we have to make arrangements to go in together on a shipping container to get the marble shipped back to the U.S. and Canada, where everyone is from, and then transported to our different cities. I hope it will come to Denver before the end of the year.

Q: Have you been to Italy before? What is Gramolazzo like and what are the people like?

A: I have been to Italy several times before, but only to Venice and Milan. The Venice Biennale is one of the most important contemporary art events in the world, so we try to go when we can. I actually took a train over to Venice at the end of the residency to see the Biennale for a few days before I came home. Gramolazzo is very small, only one major road and no stoplights. There is just the one hotel which we booked for residency group, one bank, one pharmacy. Perhaps 200 to 300 people? It mostly serves the marble quarries where Carrara marble comes from. Everyone is super nice, and they treated us to amazing local meals every day.