It just got even better for this year’s best-performing sector.

The tech sector added a little more fuel to its rally on Thursday, jumping to fresh highs after a 43% surge in 2019.

Look beyond the U.S. for the next opportunity in the tech rally, says Ari Wald, head of technical analysis at Oppenheimer.

“We’d be looking overseas in China, in particular,” Wald said on CNBC’s “Trading Nation” on Thursday. “It’s encouraging when looking at the China technology ETF, it’s ticker CQQQ, really has shown resilience through [the trade war] headlines, holding up better on the downside, acting stronger on the upswings.”

The CQQQ ETF has also begun to outperform the U.S. tech trade. Its 3%-plus gain this month is more than triple that of the XLK technology ETF.

“The August higher low was the start of it. I think that was an important turn. It’s since been followed by a reversal of its downtrend and we can see the inflection in the 200-day moving average as well. So we’re seeing signs that that trend is reversing higher,” said Wald. 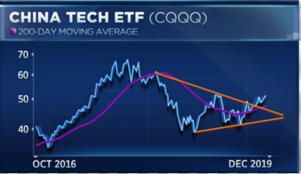 He adds that Alibaba, the ETF’s largest weighting, is mirroring Chinese tech’s moves. Wald sees that stock on the cusp of breaking above an all-time high at $211. 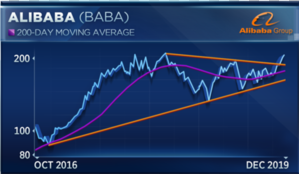 Chantico Global CEO Gina Sanchez agrees that Chinese stocks have the most upside here, largely because they have fallen so far on every escalation of the U.S.-China trade war.

“When does an actual deal get done because obviously it seems to be weighing more on the valuation of China than the U.S., which gives the catch-up trade obviously to China. That’s easily a better way to play it,” Sanchez said during the same segment.

Sanchez notes that the fundamentals also support a major rebound in Chinese equities.

“Since this trade war began, you’ve actually seen an expansion of Chinese sales outside the U.S. into other markets, so both sides are grappling with supply-chain issues, but the reality is that China has actually been making more gains,” said Sanchez.