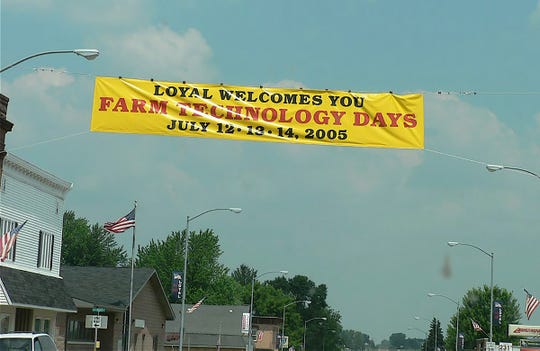 Every year beginning in 1952 Wisconsin agriculture has had the opportunity to see and learn about the latest products, goods and services at an outdoor show rotating to a different county and farm each year.

Next week, July 23 – 25, Jefferson County and the Walter Grain Farm, Johnson Creek, are hosting the 2019 show — the 65th edition. There will be new equipment and farming ideas a’plenty with company and organizations on hand to answer questions and tell you all about the whats, whens and hows of their offerings. There are seminars and programs dealing with common and not so common subjects.

And perhaps, most important of all, you will meet friends, neighbors and strangers you can talk to about farming, the government, politics and the weather. You can watch the machinery in action at field demos and kick the tires and feel the paint on the exhibitor lots. (But, you won’t see cows — this is a grain farm — those you see at World Dairy Expo.)

The Walter family had its start in 1957 when Bernard and Beverly purchased 50 acres in Jefferson County.  In 1992, son Mike and his wife Sarah took over the operation and the farm and family grew over the years. Two of their sons have actively farmed with them since they were in high school. 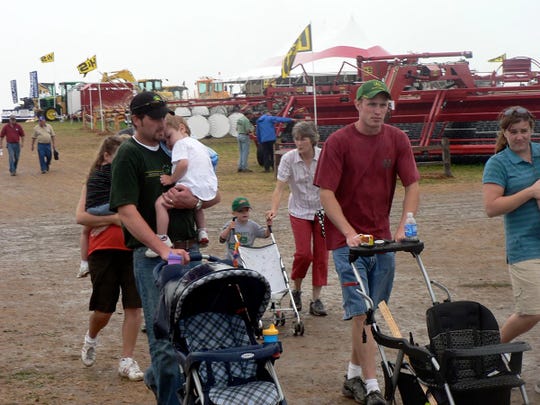 A show for young and older. (Photo: John Oncken)

The second and third generations continue the farming tradition started by the late Bernard Walter and his wife Beverly, with the fourt generation coming up fast!

The farm has changed many times in the last 62 years. For many years Bernard and Beverly milked cows, raised veal calves, feeder steers, and heifers, farrowed 350 sows and sold feeder pigs.

Currently Mike, and sons Brad, and Adam are cash cropping 6,000 acres of owned and rented land. 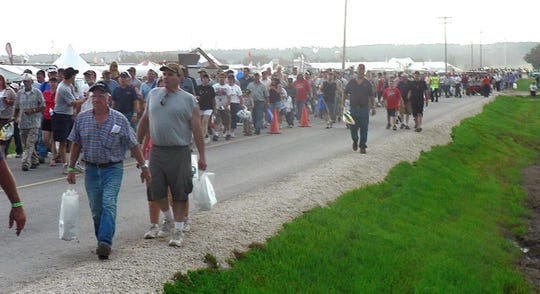 The big crowd quietly leaves the Gerrits farm in 2008 when the show was closed as a storm approached. (Photo: John Oncken)

Interestingly, the family also hosted Wisconsin Farm Progress Days in 1984 (35 years ago) on this same site. Take a look at the official web site www.wifarmtechnologydays.com/jefferson for all the details and make your plans to attend.

Over the years my involvement in agriculture has prompted me to attend or closely follow Wisconsin Technology (Progress) Days and to write about them. Here are a few things I remember and have in my files.

Back in 2003, while driving to the Farm Progress Show in  Waupaca county I did a bit of pondering about a question asked of me the day before when I was a guest on WPR Radio: One question bothered me–not at the time, but later. A listener asked why dairy farmers were using rBST on their dairy cows to get more milk when she understood farmers were already producing too much milk? 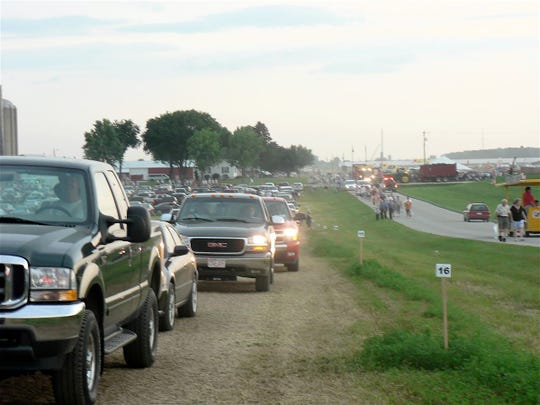 I answered by pointing out that farmers used this new technology for the same reason they used tractors rather than horses, artificial insemination instead of bulls and computers instead of a pen or pencil. It is based on producing more, cheaper, easier and with less labor. It’s called technology and has always been a part of farming.

“Oh, I never thought of it in that way,” the caller said. “Now I understand.”

But, the question is still bothersome. Especially so, as I noted the dozens of empty barns (and houses) on the back roads trip to Waupaca. (That was in 2003, 26 years ago, many more today).

That evening I attended the kickoff banquet for the Farm Progress Days and heard a raft of speakers extol the upcoming event. Among them was Rick Klemme, Chairman of  Board of Directors who related how it all began 50 years ago as a means to convey research, technology and education to the state’s farmers and agri-businesses. And how it had done so for the 50 years since.

The 48th (2001) edition of Wisconsin Farm Progress Days was in Rock County at the Venable farm east of Janesville. Unfortunately, there was no Wednesday as heavy rains fell all night and most of Wednesday and the water collected in the low spots. The show was canceled for the day and the concern of everyone was the Thursday show. 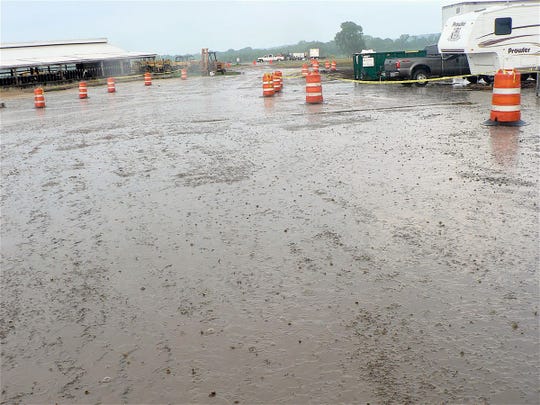 The Rock County hosts worked hard most of Wednesday night in an attempt to get the grounds in order for Thursday — and they did it!  Ed Larson, of Evansville, a member of the grounds committee and one of the owners of the 1,500 cow Larson Acres dairy at Evansville, hauled the farm manure pump and a mile of hose some 25 miles to the flooded site.

“We moved about a quarter million gallons of water at 1,000 gallons a minute,” Ed told me.

When I arrived at about 10 a.m.Thursday, I was surprised that the alfalfa fields used for parking were firm enough to keep my car from sinking. No problem and the show went on.

Incidentally, Rock County  kept the show open until 7 p.m. one evening to attract an urban audience. (In a follow up report, the attendance was much less than expected and Rock County did not recommend staying open later at future shows.) It is being tried again this year.

It was 1:14 p.m. on Wednesday, July 16, 2008 that the announcement was heard all across the 60 acres of tent city at Wisconsin’s biggest outdoor farm show. 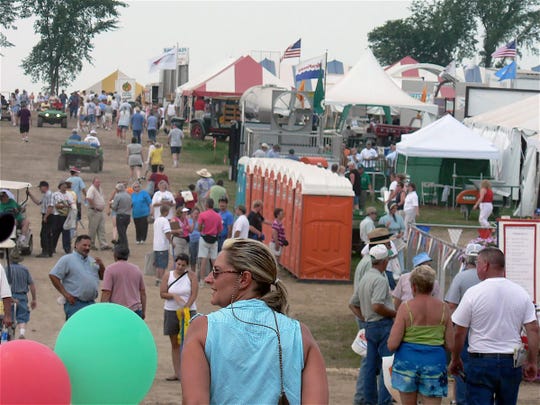 The 15,000 or so visitors scattered all across the grounds on Country Aire Farm at Greenleaf in Brown County at the 2008 Wisconsin Farm Progress Days dropped what they were doing, turned as one and began to walk toward the parking lot. Most of the thousands of visitors on the grounds were farmers, former farmers or worked closely with farmers, so they had been watching the sky, thus weren’t totally surprised by the decision.

It was a sight to behold as every vehicle had its lights on despite the early hour. The long line of lights slowly moving to the exit reminded me of the final scene in the movie “Field of Dreams,” where the road was lined with slowly moving car lights fulfilling the prediction of  “they will come.” 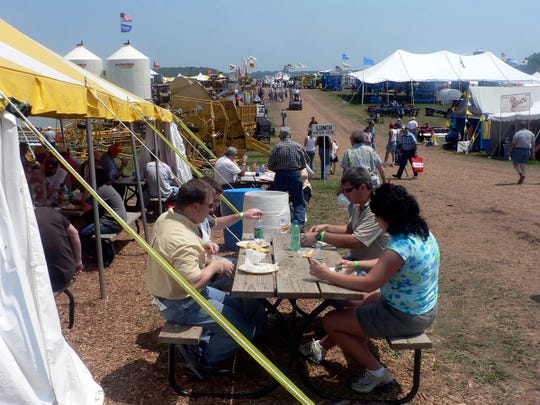 You don’t need to bring lunch, there is plenty. (Photo: John Oncken)

The 1991 Show at Vigo Farms near Brownsville drew one of the biggest crowds I remember. Gordon Berg, farm owner, had developed two outstanding herds of Holsteins. The cows were milked in two barns, a red and while barn for the Red and White Holsteins and a black and white barn for the Black and White Holsteins. The red and white barn was new with 40 tie stalls, and an elevator to the second floor. Everyone wanted to see the elevator, a true first for the dairy industry.

Other notes: The 1994 show in Columbia County was the first show to offer a commemorative tractor —  an International, model 1568  and the first show where admissions fees ($2) were charged.  The use of the new show name “Technology Days”  started  with the 2003 show.

Many more memories remain in my 35 years of writings to be told later — maybe.  But the 2019 show is about to begin. See you there.

John Oncken is owner of Oncken Communications. He can be reached at 608-222-0624, or email him at jfodairy2@gmail.com.