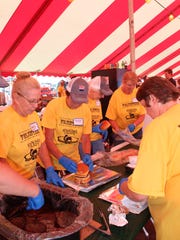 FILE PHOTO – An army of volunteers will be on hand to man the food tents, ice cream and beverage stands at Farm Technology Days. (Photo: Colleen Kottke/Wisconsin State Farmer)

Imagine planning a party for thousands of people and preparing the food in the middle of a field. That’s the task the Farm Technology Days food committee had before them preparing for the event which runs July 23-25 in Johnson Creek.

“I’ve planned parties for a couple hundred people but when you start thinking 40,000, you’re like woah,” said food committee co chair Jill Brunk. That’s where the expertise of her husband Tim Brunk came into play. Working at Pine Cone Restaurant, Tim knew what to use and where to go for supplies when feeding thousands.

From Western bowls for breakfast to hot ham and cheese sandwiches for lunch and a cream puff for dessert, the menu of food choices should satisfy any appetite. Partnering with companies like Kraemer Cheese, Mullen’s Dairy Bar, Jones Dairy Farm and Emil’s Pizza will offer attendees a sampling of the long-standing tradition and heritage of fine food products in Jefferson County.

Taking a look at the past four to five years of records for food at FTD events, Jill estimated 7,500 brats, 5,000 hamburgers and 7,000 cheeseburgers, along with hot ham and cheese sandwiches.

Cooking food in the middle of a field can pose a problem also.

“Most counties use Nescoes to keep everything hot, but that is such a drain on the electrical grid,” Jill said. “Last year they had a hard time keeping everything going so the circuits weren’t popping,”

Based on that, Jill said they decided to rent flat top griddles that use propane for cooking and hot boxes for keeping food warm, which don’t use as much electricity as roasters.

Once the food is prepared, there’s the logistics of  serving the food in a smooth. efficient manner to accommodate the crowds of FTD.

“Our main thing is we were trying to make it convenient for everybody.” said Tim Brunk. “We’re going to have food in cafeteria style. There’s two lines coming in for food so they can go in quicker and get out and then eight cash registers.”

In past years, Brunk said there were problems of food lines bottling up as people ordered and collected their food.

“Hopefully it will flow through faster with two lines coming from each end,” said Brunk.”You will grab your food and go to the cash register. It’s the first time trying it this way.”

While this is a fundraiser and the more than 650 volunteers are from community groups that will reap the benefits, Jill said, “We really worked hard to keep all the costs low, so we’re able to make a profit for those groups that are helping us.”

The committee followed the of motto “portable and affordable. So our food is easy to walk around with and its affordable, so if a family comes they’re not going to spend a ton of money,” said Jill.

Three years in the planning, the event has a number of food partners including Kramers out of Watertown to help supply cheese, ham from Jones Dairy Farm out of Fort Atkinson and Johnsonville brats, along with lots of help from 7Up for beverages.

“I’ve never met a sales person happier to do something for us,” said Jill. “Nathan 5,500 Wegner, he’s been awesome. Anything that we needed, he’s been johnny on the spot.”

The heritage of fine food in Jefferson County goes back many decades.

According to the FTD program, Mullen’s Dairy has been around for 87 years, Kraemer Cheese for 90 years, Jones Dairy Farm 130 years and Emil’s Pizza 58 years. 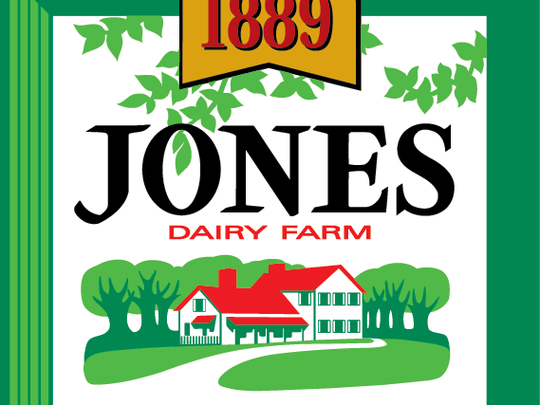 Jones Dairy Farm started in 1889 with Milo Jones who was inspired by his mother’s all natural, homemade breakfast sausage recipe, according to the farm website. Now a sixth generation family owned and operated business in Fort Atkinson, Jones has resisted adding anything artificial to their sausage recipes because that’s how Milo would have wanted it.

That same family recipe is still used on their all-natural breakfast sausages and same principle is applied to all Jones products.

Kraemer Cheese‘s story starts in Watertown in the 1920s where lifelong farmer Tony Kraemer decided to build a small dairy business on his property. Surviving the Depression, building the business, three generations later the family is still carrying on the tradition of fine dairy products.

But the Kraemer Dairy Store was born from the dreams of Tony’s son Jim and his wife Joanne. Jim joined his father on the farm in 1949 and started the store in the early 1970s. For three decades, Jim and Joanne built the business, scoured the state for the best cheeses, and grew the next generation of Kraemers. The family business now sells and ships more than 500,000 pounds of premium cheese and cheese products each year all over the country and abroad, according to the website.

Emil’s Pizza, a staple sold in grocery stores across the Midwest, traces its beginnings back nearly 60 years to a little restaurant on Main Street in downtown Watertown run by Emil Kopplin. Word spread on the street that Emil’s homemade tavern-style pizza was something special and soon the shopkeeper was inundated with requests from local businesses.

The demand grew so much that Kopplin’s business evolved from a Main Street pizzeria to a thriving operation that produces over a million pizzas a year out of its manufacturing plant in Watertown. The 20 varieties can be found in grocery stores, taverns, bowling alleys, retailers, wholesalers, convenience stores and at the Wisconsin State Fair.

Slices of Emil’s Pizza will be available during FTD in a separate food tent featuring specialty foods of Jefferson County including cream puffs created by the Pine Cone Bakery.

“All of the ingredients that go into making our pizza are produced by a farmer. Without them we would have no product,” said Dick Thompson, director of sales and marketing.

Mullen’s Dairy Bar is a business that has resonated with generations of customers for the past 87 years. Founded by Frank Mullen Sr. and his sons, Frank Jr. and Weber, in 1932. Begun as a milk bottling operation, the business added ice cream production and other dairy products in 1940. Delivery trucks from Mullen’s Dairy were a common site throughout the Watertown area following WWII and continuing up into the early 1980s.

Weber Mullen’s son, Bill, a high school basketball star, bought the business in 1976 and was the inspiration for the signature 24-oz. milkshake dubbed “Bigger Than Bill”. The main street Mullen’s Dairy Bar.

The ice cream shop/diner changed hands twice from 1997 to 2016. The iconic business is now owned by three brothers, Adam, Josh and Matt Keepman, that trace their roots to the Oconomowoc area, and have fond memories of traveling to Watertown for ice cream.

“We never had plans to do a restaurant or an ice cream project,” said chef Adam Keepman. “My brother, Matt, had purchased a company called Savoy Sorbet and was looking for a commercial kitchen to cook and found that Mullen’s was for sale.”

And the rest is history, or at least the trio wants to write their own chapter in the Mullen’s story while honoring the businesses’ legacy.

“There’s a lot of history in this building,” Adam said. “We still make homemade ice cream here (more than 25 different flavors) using the old techniques and methods. And we like to create new flavors too like Peanut Butter Fudge Pretzel, BanaNutella and S’mores.”

The business anticipates supplying the Farm Technology Days food tents with 5000 to 7000 cups of ice cream that will be transformed into three types of sundaes: Strawberry Fields, Dirt (oreo cookies and chocolate) and a Walter sundae with candy corn, candy pearls, Oreos and chocolate, in honor of the host family’s farming operation.