While many financial institutions focus on the technology upgrades required for digital transformation, cultural change must precede the investment in and deployment of new technology solutions. Unfortunately, this is a difficult challenge for many legacy institutions because it requires embracing significant changes to what has existed for decades.

Making matters worse, as the pace of change continues to increase, the performance gap within the financial services industry is growing. This is because most organizations are having difficulty keeping up, focusing instead on data, advanced analytics and new digital technologies.

The question is: How can a bank or credit union become more responsive to the digital opportunities in the marketplace without alienating current employees or negatively impacting what has made the organization successful in the past?

It’s a multifaceted challenge. In some cases, current leadership may not fully understand the dynamics of the culture change required, or may just be ‘willfully blind’ to what is required. The result may be employees who don’t feel empowered to embrace change, take risks or disrupt themselves. Finally, with most leaders being in the banking industry for so long, the reality of “This is the way we do things” is hard to change. Being disruptive is just not rewarded in many organizations.

According to the report, ‘The Digital Culture Challenge: Closing the Employee-Leadership Gap‘, from Capgemini in partnership with Brian Solis, corporate culture is the culmination of how a company works and operates. It is composed of the collective experiences of employees — what they believe in and what they value. Leadership, purpose, and vision also play a role in describing a corporate culture. Defined in more simple terms by MIT Sloan, “Culture is what happens when the boss leaves the room”.

Key Values of a Digital Culture

In an excellent article published in the Summer 2019 Issue of the MIT Sloan Management Review, authors George Westerman, Deborah L. Soule and Anand Eswaran show that there are four key values of a strong digital culture: impact, speed, openness and autonomy. 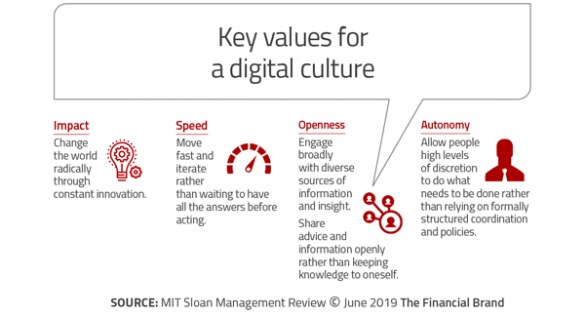 It was found that many leaders focus on the ‘impact’ component, but all four values are required to succeed internally and in the marketplace. Speed is required to keep up with the needs of the consumer and with other competitive offerings. Openness empowers employees to challenge what was done in the past, while autonomy provides employees the freedom to do ‘what’s right’ without a formal approval process. 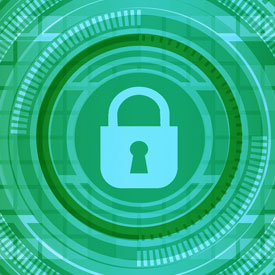 REGISTER FOR THIS FREE WEBINAR

Cracking the Code to Making Your Institution Relevant

If you’re serious about making sure consumers get accurate information about your brand when and where they need it, register for this webinar from Harland Clarke

The Difference Between Digital and Traditional Organizations

When the authors of the MIT Sloan Management Review article looked at how the key cultural values translated into actual practices, they uncovered a difference between digital and traditional organizations. Across the spectrum of organizations, they found that practices ranged from rapid experimentation to strict rule adherence, with overlap occurring between organizations on the extremes.

For instance, focusing on the end consumer and quantitative results were important to both digital and traditional organizations. The authors also found that many of the traditional practices, such as seeking stability and acting with integrity are becoming as important, if not more so, with digital organizations. 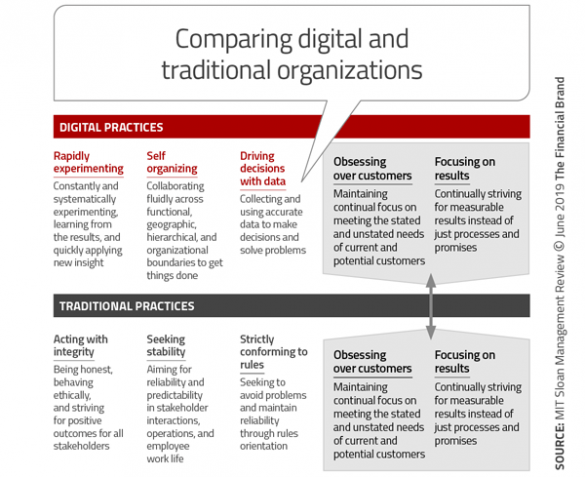 According to the article, “The greatest advantage of digital companies is the speed with which they create and test innovations. Traditional businesses must try to cultivate such habits within a framework of data-driven decision-making.”

A Case Study: How DBS Bank Built A Digital Culture

In Asia, not only was DBS Bank one of the first organizations to commit to digital banking both as part of the legacy organization as well as building a separate digital bank in India, but they were also the first bank to develop a methodology to measure digital value creation. To differentiate a digital customer from a traditional customer, DBS defined “digital customers” as those who either purchased a product digitally over the previous 12 months, or conducted over 50% of their transactions over digital channels.

According to DBS, the digital retail segments generate twice the income, a 20 percentage-point lower cost-to-income ratio, and a nine percentage-point greater return on equity (ROE) than the traditional banking segment. According to various sources, digital customers from DBS represent more than 40% of the customer base and generate roughly 70% of the bank’s profit. 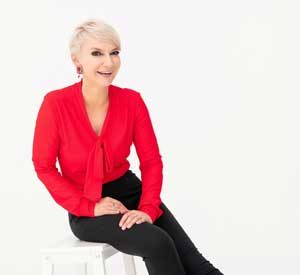 I met Sonia Wedrychowicz, previous COO of DBS Digital Bank, in October 2017, when she was presenting at a conference in Rome. Her speech was entitled, “Digital Bank: One Year Later”. I was impressed by the achievements and asked her about the digital transformation process at DBS.

She mentioned how it felt to be part of a big well-structured organization that managed to install and sustain vital elements of the startup culture. “In Digital Bank, we knew the vision of what we wanted to achieve and the ‘why’. The ‘how’ was entirely left to us — the team,” stated Wedrychowicz. “The whole bank was aware of the vision and everyone was working together to help make Digital Bank a reality as opposed to putting obstacles in front of us.”

According to Wedrychowicz, the key was to view every new idea and initiative from the customer perspective, as opposed to being part of an internal bank goal. This meant that the DBS team had to think about the customer experience every time they created a product or solution. And that experience had to be simple, seamless and fast … usually defined in a limited number of steps to complete. And, most importantly, it had to be technology-enabled.

Employee education was put at the core of the culture change. The bank understood that online courses or even in-class learning was not enough to promote a new mindset and a profoundly new way of working. The training had to engage thousands of its employees in internal hackathons, where DBS employees worked hand-in-hand with startups to deliver banking innovation using ad hoc created mobile applications.

“Such a training of continuous delivery towards the goal in only a few hours not only brought a mindset change, but also resulted in a true appreciation of the work done by the startup companies,” stated Wedrychowicz, “In my opinion, this approach to training was instrumental to the change in attitude for many control functions (legal, compliance, operational risk, audit).”

An illustration of this change in mindset is that DBS was one of the first banks in the world to incorporate startup fintech solutions into their mobile applications via APIs. Such a move immediately enhanced customer experiences, without the necessity to create similar solutions in house — which would have taken a lot more time and effort. In many cases, DBS was the first partner for those startups, so the vendor approval process had to be re-imagined in order to get all the necessary approvals.

An example of the disruptive mentality within DBS was when Wedrychowicz had a meeting with the head of operations, who told her that his role was to “design for no operations,” (which meant that processes should be put in place that would fully automate the back-office and, in effect, eliminate his job).

“One amazing side effect of the culture change was that people wanted to be part of the success story, Wedrychowicz told me. “When I moved from the digital bank to become Head of Technology for our consumer bank in Singapore, a large number of people from business and technology joined my team. They told me when they came to work with me that they wanted to have ‘something meaningful on their resume again’.”

One of the unique differentiators that I found about DBS through my conversations with Sonia Wedrychowicz was that DBS positioned its innovation department to be the delivery mechanism for culture change, as opposed to delivering product innovations.

According to Wedrychowicz, the innovation department was responsible for organizing the hackathons, engaging the employees into the ‘ideas of the month,’ nurturing and accelerating fintech collaborations, as well as spreading the message on innovation and digital progress for the bank around the world. “Thanks to a small number of very engaged people, who were the true culture change agents, the whole bank started getting excited about the digital way of delivering value to customers,” Wedrychowicz explained.

Much more than just buying and deploying new technology, the DBS case study makes it clear that no digital transformation can ever be delivered without the deep engagement of senior management. With this commitment, legacy cultures can shift, retraining and recruitment of talent can occur and organizations can reap the rewards of becoming digital.

To create a digital culture, organizations need to have both top-down and bottom-up approaches that direct, empower, engage and inspire the board, management personnel and employees to build the culture change together. To initiate a digital culture transformation, it is important to create a vision that is bigger than the legacy business. Employees will only want to engage if they believe the ‘new organization’ will be positioned to succeed.

As was seen with the DBS case study, top management led by example, possibly even putting their own jobs on the line. The new culture must be communicated and reinforced often, using case studies that can be shared throughout the organization as to how the transformation is succeeding.

Beyond broad announcements, the new culture must be reinforced in private conversations, group meetings and as part of the review process. Employees will only support efforts where they are free to engage and initiate changes in alignment with the new culture. In other words, actions speak louder than words.

When initiating the new digital culture, changing everything at once is not required or even desired. Feel free to start small, building momentum with successes. This strategy is why many financial institutions (including DBS Bank) have implemented strategies to build separate digital banking units.

Finally, it is important to provide the right tools, levels of investment support and rewards that will provide the required foundation for success. Remember, developing a digital culture does not require the elimination of parts of the bank or credit unions that are highly successful. In many cases, what is required is a clear communication of the new culture and the acceptance of adjustments to old practices that can be successful in the new digital organization.