Kenya Airways will operate a daily non-stop flight to New York with the inaugural flight scheduled for October 28 with the commanding pilot being Captain Irene Koki Mutungi.

Ms Koki will be making history again in Kenya as the national carrier stated it expected the flights between Nairobi’s Jomo Kenyatta International Airport (JKIA) and New York’s JFK Airport to play a critical role in returning it to a profit-making territory.

She made history by becoming the first female on the African continent to become certified as a Captain of the Boeing 787 Dreamliner aircraft.

Kenya Airways acknowledged Captain Koki as a lady of many first who set the pace for others in the aviation industry when she was hired as their first female pilot in 1995 and served as the only female pilot for six years.

In 2004, she became the first African woman to become captain of a commercial aircraft, when she qualified to command the Boeing 737.

Another first for Captain Koki was in September 2014, when she was one of 39 pilots at Kenya Airways, out of a total of 530 and she was the designated Captain on the Nairobi to Paris route on the B787.

On Wednesday, Ms Koki posted on her Twitter account a picture with Transport CS James Macharia and US Undersecretary for international trade Gilbert Kaplan stating how excited she was about her inaugural flight to New York from Nairobi.

Kaplan also hailed the great progress Kenya Airways and Kenya Airports Authority have made by establishing a direct flight between Nairobi and New York adding that this will also help promote commercial and cultural exchange between the US and Kenya. 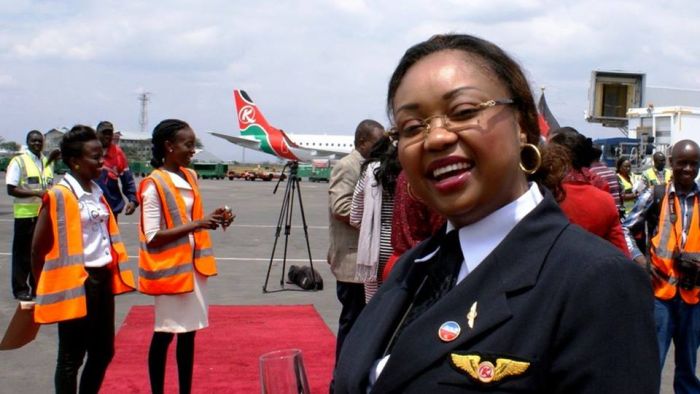