You are here: Home / Technology / Analysis | The Technology 202: Three Hill hearings kick off next phase of Washington vs. Silicon Valley – The Washington Post Backlash against Silicon Valley has been building in Washington — and it’s coming to a head today as executives from major tech companies find themselves in the hot seat at three Capitol Hill hearings.

Representatives from companies including Facebook, Google, Amazon and Apple will be testifying for the first time in House lawmakers’ broad probe into whether the tech industry has grown too powerful. Meanwhile in the Senate, another Facebook executive will face a grilling about its widely criticized cryptocurrency plans, and Google’s lobbying chief will be rebuffing Republicans’ allegations that its products are censoring conservatives.

The three hearings highlight the tech industry’s multi-front battle as lawmakers as divergent as President Trump and House Speaker Nancy Pelosi (D-Calif.) say the industry can no longer be trusted to regulate itself. The flurry of activity also suggests that Washington is no longer going to allow the tech industry to go its own way without significant congressional oversight.

The House antitrust investigation could have the most sweeping impact on the industry, as underscored by the four companies on the witness list. Some are calling for big tech companies to be broken up beause they’re too powerful, and lawmakers plan to explore whether existing antitrust laws need to be revamped for the digital age.

Rep. David Cicilline (D-R.I.), the chair of the House antitrust panel that’s conducting the investigation, says the need for Congress to have greater oversight of the tech industry is more acute in the wake of the Federal Trade Commission’s decision to fine Facebook $5 billion for violating promises it made to improve its privacy practices. Democrats widely criticized the fine as barely a slap on the wrist for a company that generated close to $56 billion in revenue last year.

“If anything that decision by the FTC was a reminder of the importance of work we are doing and the role Congress must play in getting these markets to work properly and protecting consumers and protecting competition,” Cicilline told me in an interview Monday night.

In addition to criticizing the action that the FTC took on privacy, the Rhode Island Democrat said he’s been disappointed by the FTC’s enforcement of existing competition laws and said the investigation will give Congress the opportunity to determine the role it needs to play in promoting competition in tech.

“By and large, the FTC has not been effective in addressing the growing concentration of economic power and the dominance of these large technology platforms,” he said. “The FTC hasn’t had a serious, monopoly, antitrust action in decades.”

Cicilline’s committee today plans to press the companies on the impact their businesses have on small businesses and entrepreneurs. He expects the panel will look into the acquisitions some of the companies have made, especially of potential competitors on the rise — as Facebook did when the photo-sharing service Instagram was in its early days. Facebook declined to share its testimony ahead of today’s hearing, but it pointed to an op-ed the company published in the New York Times defending it against critics who say the company should be broken up.

Though the companies will get the first round of questions from lawmakers, House lawmakers will also hear from some of their toughest critics, including Tim Wu, a Columbia University law professor who says Facebook needs to be broken up, as well as tech policy experts who have criticized Amazon for allegedly abusing its market dominance. (Amazon founder and CEO Jeff Bezos owns The Washington Post.)

Today’s hearing is just the second in an investigation that is expected to continue into 2020. The companies’ top brass — like Bezos, Mark Zuckerberg, Tim Cook and Sundar Pichai — won’t be on the witness stand today, but Cicilline said they could be at future hearings.

“It is hard for me to imagine at some future date we will not also want to hear from some of the CEOs from the major technology firms,” Cicilline told me. “I expect that will happen later in this investigation.”

Cicilline said the investigation began with bipartisan support, and he hopes that continues. He did acknowledge that could get harder as the committee attempts to create legislative solutions on competition.

“The harder part will be crafting the solutions,” he told me. “It’s easy to identify some of the practices that are problematic.” BITS: A tweet by Trump telling several members Congress to “go back” to their own countries does not violate Twitter’s policies, the company said on Monday. Researchers now say that Twitter failed to uphold its own rules against attacks on the basis of race or national origin, my colleagues Craig Timberg, Drew Harwell and Tony Romm report.

Although Twitter does not remove violating content by world leaders, it does downrank the posts and covers them with a warning label — a policy change the company introduced last month. Researchers say this policy should apply to Trump’s tweet targeting Reps. Alexandira Ocasio-Cortez (N.Y.), Rashida Tlaib (Mich.), Ayanna Pressley (Mass.) and Ilhan Omar (Minn.). The tweet sparked broad allegations of racism against women of color.

“It’s the first major test of their rules, and we’re all left wondering why they even set them up in the first place?” Joan Donovan, director of the Technology and Social Change Research Project at Harvard Kennedy School’s Shorenstein Center, told The Post. She suggested that the White House’s allegations that tech companies censor conservatives, which the president repeated at a social media summit last week, could have played a role in Twitter’s decision.

“That maneuver really forced Twitter into a corner, to where they’re not able to execute on this policy, especially when you have the most high-status Twitter user in the fray,” she said. Twitter would not provide additional information about why the tweet did not violate its policies.

NIBBLES: Lawmakers and privacy advocates say that Apple has failed to deliver on its alleged support of federal privacy legislation, my colleagues Reed Albergotti and Tony Romm report.

Apple CEO Tim Cook has met with dozens of lawmakers from both parties across the country, “but Apple hasn’t given its explicit stamp of approval to any federal bills that have been introduced, which would set a national privacy standard,” Reed and Tony write.

The inaction from Cook, who has tried to distinguish Apple as a consumer privacy advocate while heavily slamming rival Facebook over its data breaches, rankles some Washington lawmakers.

“I would argue there’s a need for Apple to be a more vocal part of this debate,” Sen. Mark R. Warner (D-Va.), who recently introduced a bill that would prevent advertisers from using manipulative practices to glean user data, told Tony and Reed.

And when it comes to state privacy efforts, state legislators say that Apple not only refuses to support measures but has actively worked to soften them. In states including California, Washington and Illinois, Apple finds “itself aligned with the companies it criticizes in seeking to ward off state legislative proposals, often through lobbying organizations in which they share membership, such as TechNet and CompTIA.”

“We advocate for strong federal legislation that protects everyone regardless of which state they may live,” Apple spokesman Fred Sainz told The Post. “We understand the frustration at the state level — we are frustrated, too — but this topic is so important we need to be united across America.” BYTES: Trump tweeted that his administration will “take a look” after billionaire tech investor Peter Thiel called on the FBI and CIA to probe Google for allegedly working with the Chinese government.

“Billionaire Tech Investor Peter Thiel believes Google should be investigated for treason. He accuses Google of working with the Chinese Government.” @foxandfriends A great and brilliant guy who knows this subject better than anyone! The Trump Administration will take a look!

Trump’s tweet underscores the influence Thiel maintains in the Trump administration as the president’s top supporter in Silicon Valley. The Facebook board member gave an interview to Fox News last night, where he criticized Google for allegedly working with the Chinese government. Thiel provided little specific evidence for his claim, but criticized the company for pulling back from a contract with the Pentagon, known as Project Maven, following protests from employees who did not want to build artificial intelligence that could be used for warfare.

“If you say you’re building a Manhattan project for AI, don’t you think that would attract the interest of foreign intelligence agencies?” Thiel said. “This is just hidden in plain sight. There are all these ways that Chinese nationals are engaged in espionage in the United States.”

Thiel was escalating allegations first reported by Axios at the National Conservatism Conference over the weekend. Google pushed back on those allegations yesterday.

“As we have said before, we do not work with the Chinese military,” a company spokesperson told CNBC.

“Everyone in [Silicon] Valley knows that the Chinese government is very involved,” Lonsdale told “Squawk Alley” in an interview, also not pointing to clear evidence. “It’s something we don’t talk about a lot. It was very courageous of [Thiel] to talk about it.” 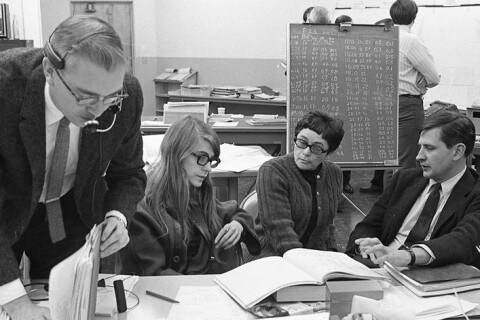 Apollo 11 Had a Hidden Hero: Software

The moon landing was one of the most important moments in the history of computing, laying the foundations for everything from fly-by-wire cockpits to the smartphones in our hands.

— Talent news at the intersection of the tech industry and Washington

Former Vine head Jason Toff is leaving Google to join Facebook, where he’ll be starting up a new initiative under the company’s NPE team, he announced in a tweet yesterday