You are here: Home / Technology / Analysis | The Technology 202: Facial recognition debate expected to turn toward immigration – The Washington Post The facial recognition debate is heating up on Capitol Hill as privacy advocates say it’s time for Congress to demand answers about the scope of the government’s use of the technology, especially when it comes to monitoring immigrants.

The renewed scrutiny follows a report from my colleague Drew Harwell over the weekend revealing U.S. Immigration and Customs Enforcement officials are using state drivers’ license photos for facial recognition searches. The findings from researchers at Georgetown Law’s Center on Privacy and Technology are likely to dominate a House Homeland Security Committee hearing tomorrow when lawmakers are expected to grill various government officials about how they are using the new technology and whether stricter guardrails need to be put in place.

ICE officials are notably not on tomorrow’s witness list. But slated to show are officials from U.S. Customs and Border Protection, the Transportation Security Administration, Secret Service and the National Institute of Standards and Technology. Privacy advocates hope ICE’s absence in light of their recent findings will be the elephant in the room.

“There’s a very good argument that this is the most invasive surveillance technology of the 21st century,” Alvaro Bedoya, the founding director of Georgetown Law’s Center on Privacy and Technology,  told me. “No one expects this when they go to the DMV.”

Unitl now, resistance to facial recognition has been a rare spot of bipartisan consensus in Washington, with lawmakers on opposite sides of the political spectrum like Rep. Alexandria Ocasio-Cortez (D-N.Y.) and Rep. Mark Meadows (R-N.C.) expressing concerns about the emerging technology. But now with ICE at the center of debate, pervasive partisan fault lines could emerge on the issue and it is likely to become more politicized.

A tweet yesterday previewed how the debate could become become more immigration focused. In response to Drew’s story, Rep. Yvette D. Clarke (D-N.Y.), who sits on the Homeland Security panel, called the Trump administration “xenophobic” and said use of the technology is evidence of “another way to target immigrants.”

Are we surprised? This xenophobic admin has found yet another way to target immigrants.

This is why it’s so important that Congress acts to combat bias used in AI and is why I introduced the Algorithmic Accountability Act this Congress #ImmigrantsMatterhttps://t.co/c5AqPTm7Cf

Bennie Thompson (D-Miss.), the chair of the Homeland Security Committee, said it’s time for more transparency and scrutiny of facial recogniton before the government deploys it further. He warned that government’s use of facial recognition “could have far-reaching privacy implications if left unchecked.”

“Federal agencies like DHS must balance their critical security mission with a commitment to safeguard citizens’ civil liberties,” Thompson said in a statement to The Technology 202. “It is imperative these technologies only be used for authorized purposes in a fully transparent manner. Before the government deploys these technologies further, they must be fully scrutinized and the American public needs to be given a chance to weigh in.”

“DMV photos should be available for law enforcement use,” he said in a statement to the Technology 202. “These public records have long been a basic tool for police work and should be used in our fight against terrorists, criminals and violent international cartels. Congress should focus on making sure DHS and other departments are using the most accurate and effective facial recognition technology available.” The Facebook Inc. Instagram logo is displayed on an Apple Inc. iPhone in an arranged photograph.  Photographer: Andrew Harrer/Bloomberg

BITS: Instagram is introducing features to mitigate bullying on its platform, including a new prompt that uses artificial intelligence to warn posters that language they are about to publish could be considered offensive, The Wall Street Journal’s Michael Tobin writes. The feature has been introduced in recent days and Instagram found in early tests that some people who saw the prompt changed their comments.

Instagram is also developing another feature called Restrict, which would give users greater controls of their interactions with those who target them. The feature will allow users to hide unwanted comments from specific users without alerting them they’ve been restricted.

The changes come as Instagram and its parent company Facebook face broad pressure to limit harassment on their platforms. Facebook also adopted some new anti-bullying measures on its platform last year.

NIBBLES: Facebook used internal, secret projects to manage its own reputation and provide users with “counterprogramming” against attacks on the company, even as it struggled to combat misinformation and fake news leading up to and following the 2016 election, Bloomberg News’s Mark Bergen and Kurt Wagner report. The report raises concerns that Facebook may have prioritized building technology to protect its own reputation over addressing disinformation targeting elections.

Just a month before the 2016 election, Facebook used an internal-monitoring system called “Stormchaser” to send promoted alerts to users in the Philippines that a meme was fake telling users to copy and paste text to prevent Facebook from sharing their data. Another internal effort, named “Night’s Watch,” allowed staff to monitor news coverage of Facebook on both Facebook and WhatsApp, the encrypted messaging platform owned by the company.

A proposal to use these “promoted messages” to alert U.S. users about how to report fake news was discussed, according to internal emails, but it’s unclear whether the proposal was executed. “The initiative showed how the company prioritized projects refuting fake news about Facebook over other forms of misinformation spreading on the social network,” Mark and Kurt write in characterizing the view of a former project employee.

A Facebook representative denied the allegations, saying that the internal tools “wouldn’t have worked” to monitor content unrelated to Facebook, calling a comparison between the tool and fake news efforts a “false equivalence.” “Protest organizers have tried to use the summer sale to underscore the labor conditions at the company, which is valued at close to $1 trillion,” Hamza wrote. “Employees in the United States have also attempted to unionize for years, in addition to calling for backup day-care benefits and higher wages.”

Workers involved in the Minnesota facility protest came to the bargaining table with Amazon in November, but the company has stalled unionizing efforts since, reports Josh Eidelson at Bloomberg News, who broke news of the strike. The workers have filed a complaint with the National Labor Review Board accusing Amazon and its staffing service of breaking the law by punishing and firing employees for organizing.

A group of Amazon software engineers will also fly out to the protest to show support, Eidelson reports, a sign of increasing solidarity between Big Tech’s white- and blue-collar workers.

The strike could garner support from a field of 2020 candidates who have expressed concerns about Big Tech and are eager to show their support for workers. Sen. Bernie Sanders (I-Vt.) has persistently criticized Amazon for its working condition and low wages, introducing legislation last summer that pressured the company into hiking its minimum wage to $15 an hour. Elizabeth Warren (D-Mass.) and Cory Booker (D-N.J.) have both called for antitrust action against Amazon and a number of 2020 candidates supported striking Uber and Lyft drivers earlier this year.

People are silhouetted as they pose with mobile devices in front of a screen projected with a YouTube logo, in this picture illustration taken in October 2014. (Dado Ruvic/REUTERS)

— A coalition of advocates has asked the Federal Trade Commission to crack down on YouTube as it nears a settlement with the company over violations of federal laws protecting children online, Bloomberg News’s Ben Brody reported yesterday. In a letter released yesterday, the coalition of groups pushed the FTC to require YouTube to separate its children’s content into a different platform.

The letter followed a discussion between the groups and FTC Chairman Joseph Simons in which he suggested that the agency might propose a settlement that would require YouTube to disable advertising on children’s content, Bloomberg reported. Advocates say the fix would just shift responsibility away from Google onto creators.

The debate probably is likely to spill over into a hearing today in front of the Senate Judiciary Committee over protecting children online, where a handful of children’s privacy experts will testify. Sen. Josh Hawley (R-Mo.), a strong YouTube critic who has pushed for legislation that would force the platform to stop recommending any videos featuring children or see $10,000 daily fines as a result, is on the committee and is likely to discuss legislative action against the company. 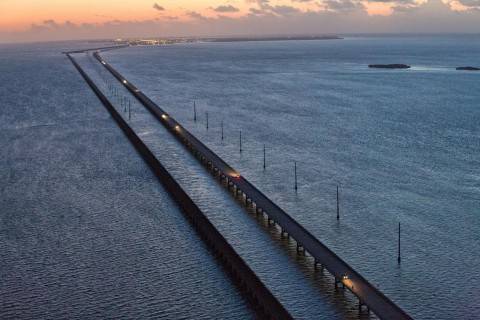 Rising seas imperil the delicate web of cables and power stations that control the internet.

— Talent news at the intersection of the tech industry and Washington: