More than 50 scientists and thinkers from India, the US, China, Europe and Singapore spoke about topics as varied as the ethics of artificial intelligence (AI), how our genes impact our health, black holes and pursuing careers in science in India. Neuroscientist and science populiser VS Ramachandran announced an institute of Indology at the festival.

A Google scientist illustrated how machine learning (ML) can be used to discern some of the contours of science’s uses for society. Participants played with genetically modified flies, more than 1,300 people scored their smile using AI, tinkered with paper circuits, which allow one to embed electronics on a sheet of paper solder-free, and others interacted with a humanoid robot, and saw a driverless car in action.

Participants also painted to imagine the world in 2050. They gave just-a-minute talks on oddball, but scientifically fun, topics such as finding that someone they considered their best friend was in fact a robot, or that they were reborn on a black hole. An eight-year-old even asked intelligent questions about black holes to a prominent physicist from Bengaluru. 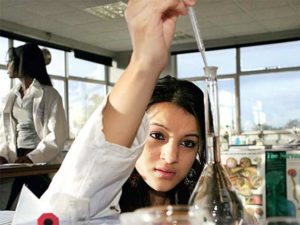 Now for a calibrated push

Why ISF? It’s hard to imagine societies progressing without significant collective investment and focus on science, orders of magnitude more than the current efforts of countries like India. And indeed, this lack of investment is not lost on India’s policymakers.

GoI has also sought to upgrade India’s universities — for example, through the Institutes of Eminence programme — no small part of which is related to upgrading science. And recently, the government articulated a policy framework to upgrade pre-existing clusters of scientific institutions in India (think Bengaluru, the national capital region, Hyderabad, Pune and many smaller clusters) so as to get them to critical mass on the global stage.

But even significantly more money spent and updating of anachronistic policies will not suffice.

Think of these necessary ingredients as catering to the supply side of science. It will generate scientific ideas. There has to be an analogous upsurge on the demand side as well.

Science careers lacks lustre in India. Only 18% of our top undergraduates are interested in doing a PhD in India, and barely a quarter understand the point of a research paper. China is 10 times more likely than India to produce papers that are heavily cited, and the US 17 times more so. Nor is India’s success in translating research into successful companies anything to laud. In MIT Tech Review’s List of 50 Smartest Companies of 2019, one is from India, seven from China and more than 30 from the US.

Where will the enthusiasm and talent for the scientific output from the upgraded universities and institutes come from? Ultimately, the driver has to be societal enthusiasm. Thus the nascent effort with ISF. It’s small, but it’s a start. With 13,000 people attending, 55% returning on the second day for more, 35% reporting direct conversations with a scientist and 75% rating their experience as 8 or more on a scale of 1to 10, it could be a start to something.

Khanna is professor, Harvard Business School. They are two of the three co-founders of Aspiring Minds, a global AI company dedicated to finding “Lost Einsteins” Aggarwal and Khanna are co-founders, Aspiring Minds.

DISCLAIMER : Views expressed above are the author’s own.