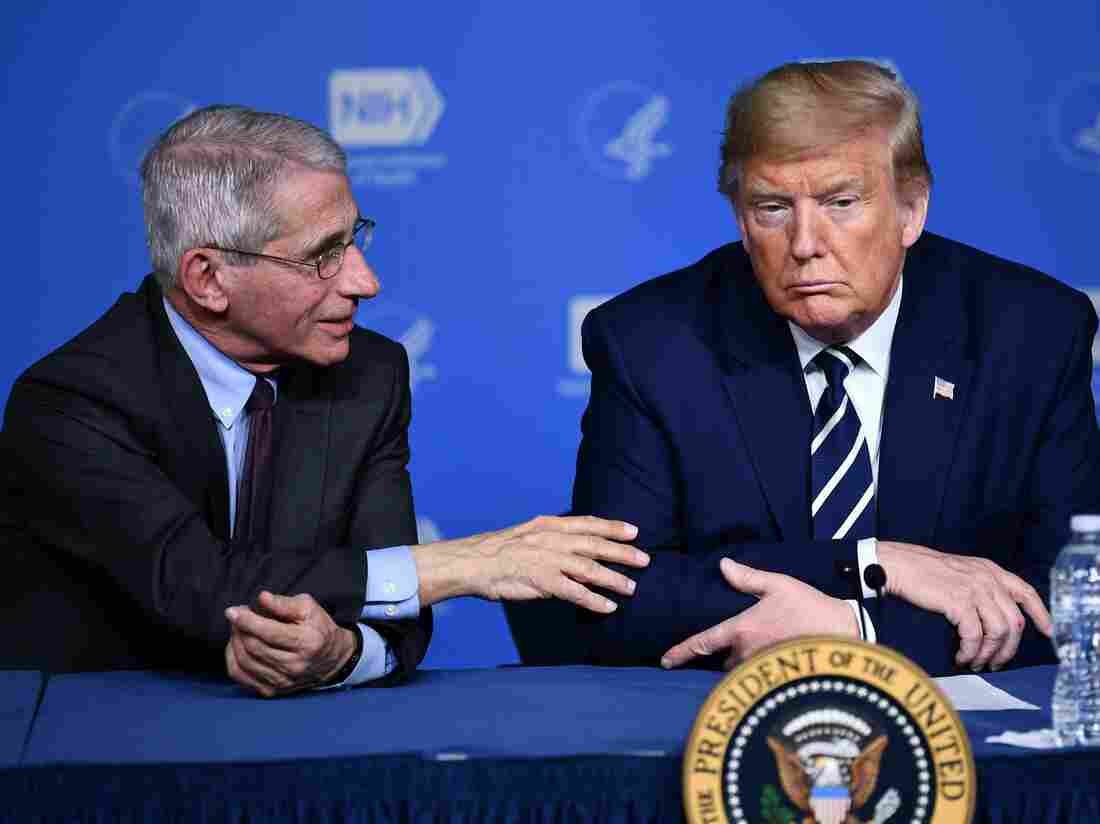 President Trump listens to Anthony Fauci, director of the NIH National Institute of Allergy and Infectious Diseases, after a tour earlier this week. 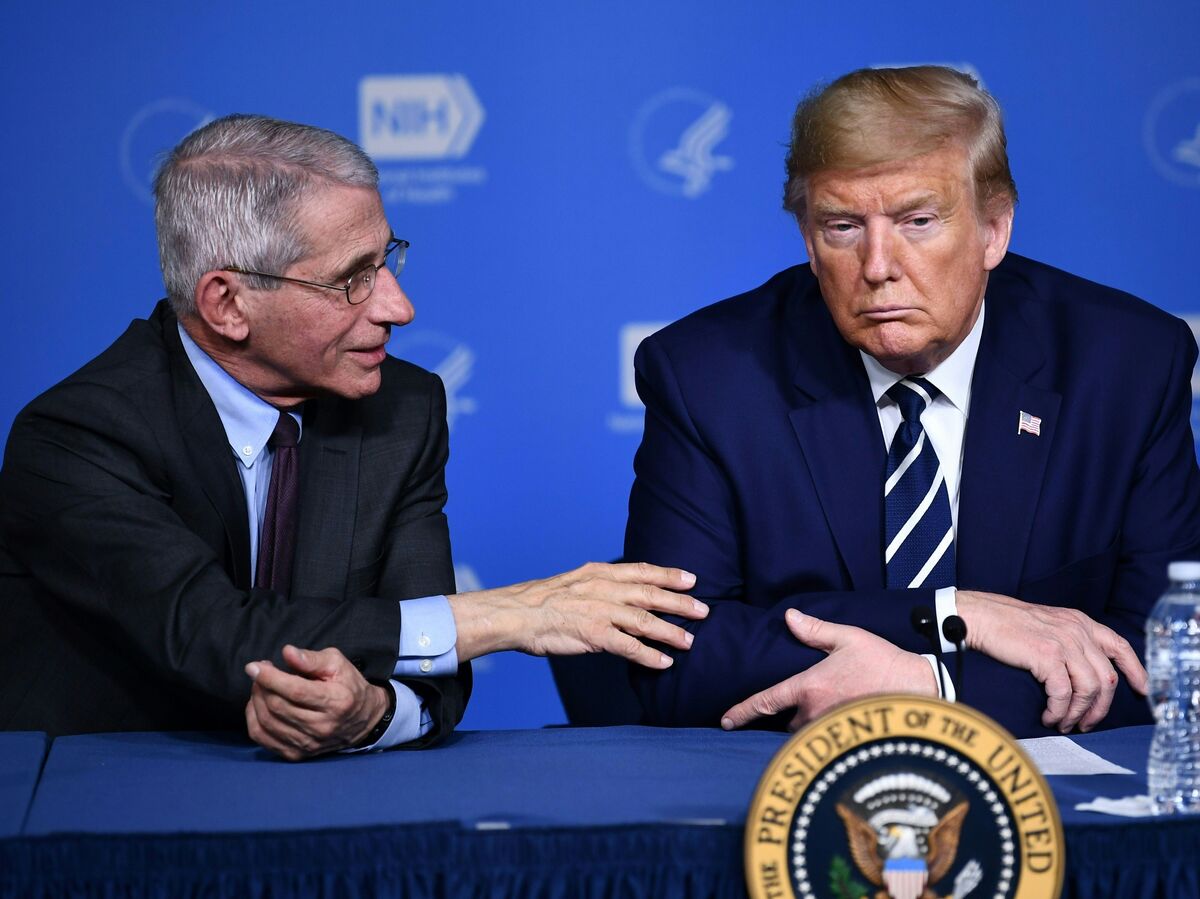 President Trump listens to Anthony Fauci, director of the NIH National Institute of Allergy and Infectious Diseases, after a tour earlier this week.

President Trump is known to say what’s on his mind, to go with his gut and accentuate the positive. That approach is now colliding with a public health emergency in the form of coronavirus.

The challenge posed by Trump’s breezy style was on full display Wednesday night in an interview in which he disputed the World Health Organization’s recent coronavirus death rate estimate of 3.4%.

“Well, I think the 3.4% is really a false number,” Trump told Sean Hannity on Fox News. “Now, this is just my hunch, and — but based on a lot of conversations with a lot of people that do this, because a lot of people will have this, and it’s very mild. They will get better very rapidly. They don’t even see a doctor.”

“Personally, I would say, the number is way under 1%,” Trump said.

Public health experts have said there actually is a lot of uncertainty about the mortality rate of coronavirus because it is so new, testing remains limited and the severity of illness varies widely. They say the mortality rate could decrease as more is understood about the disease.

“We are still very early in understanding. All the evidence isn’t there,” said Adm. Brett Giroir, an assistant health secretary in charge of public health. Giroir told reporters on Capitol Hill that modeling suggests that the death rate is likely lower than 1%. That’s higher than the death rate for the seasonal flu, which is typically around 0.1% and 0.15%.

The WHO rate compares the number of deaths to the number of people tested. But many people who have the virus do not show serious symptoms and do not get tested, said Anthony Fauci, head of the National Institute of Allergy and Infectious Diseases.

But, as Trump tried to explain this in his interview, he added confusion by discussing how people with a mild case of the disease caused by coronavirus may not be tested for it.

“So, if we have thousands or hundreds of thousands of people that get better just by, you know, sitting around and even going to work — some of them go to work, but they get better,” Trump said.

Trump’s upbeat tone made it seem as though he was suggesting it was a good thing that people with coronavirus could go to work.

Meanwhile, major employers in Washington state, where there has been a cluster of coronavirus cases, are telling employees to stay home to avoid further spread of the virus.

Facing backlash, Trump clarified what he said he meant in a tweet on Thursday morning. “I NEVER said people that are feeling sick should go to work,” Trump said.

I NEVER said people that are feeling sick should go to work. This is just more Fake News and disinformation put out by the Democrats, in particular MSDNC. Comcast covers the CoronaVirus situation horribly, only looking to do harm to the incredible & successful effort being made!

An administration official told NPR on the condition of anonymity that when Trump said sick people go to work, he was talking about telecommuting.

During the interview, Trump also revealed that he was concerned that repatriating Americans from the Diamond Princess cruise ship that was held in Japan last month would “look bad” because it would increase the total number of coronavirus cases in the United States. “I felt we had to do it. And, in one way, I hated to do it statistically,” Trump said.

Trump has continued to boast about the United States having fewer cases of the virus than other countries do, even as infectious disease experts say numbers are likely to go up significantly once testing is more widespread.

It’s a challenge for any politician to accurately convey public health messages: to encourage preparedness and avoid inciting fear without underplaying or overselling the risks. That challenge is particularly acute for Trump given his free-flowing communications style. 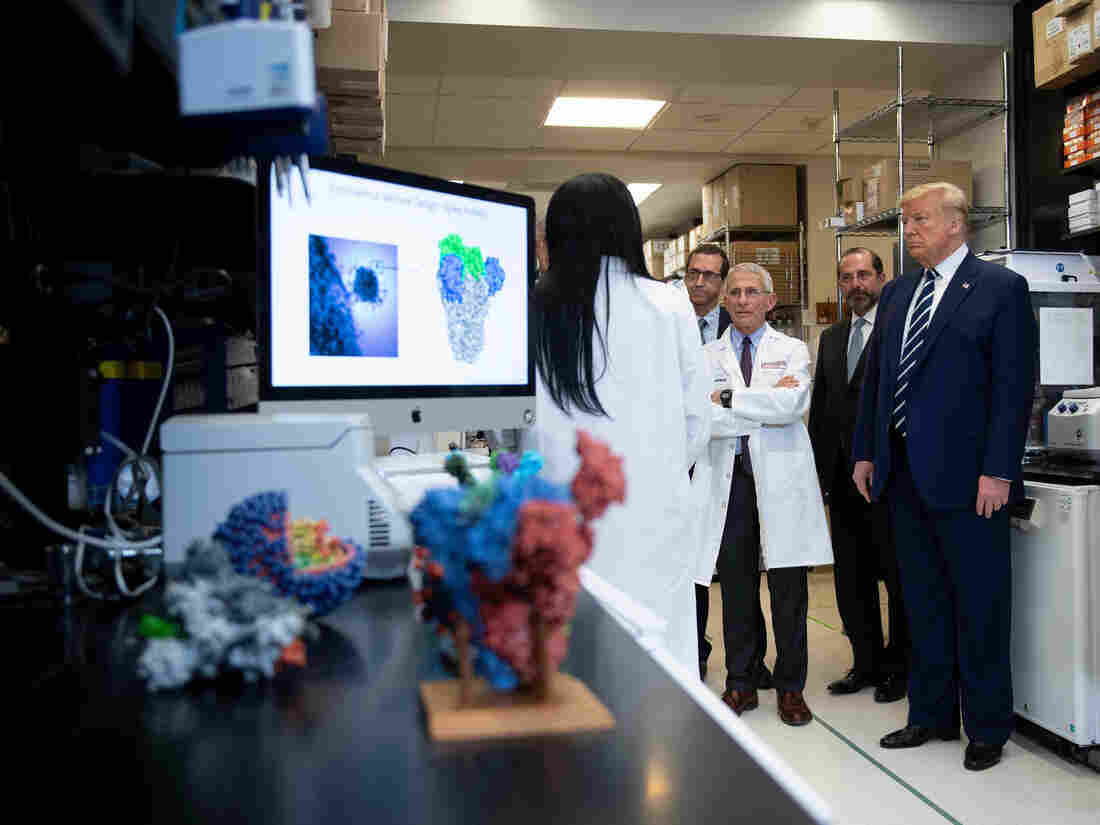 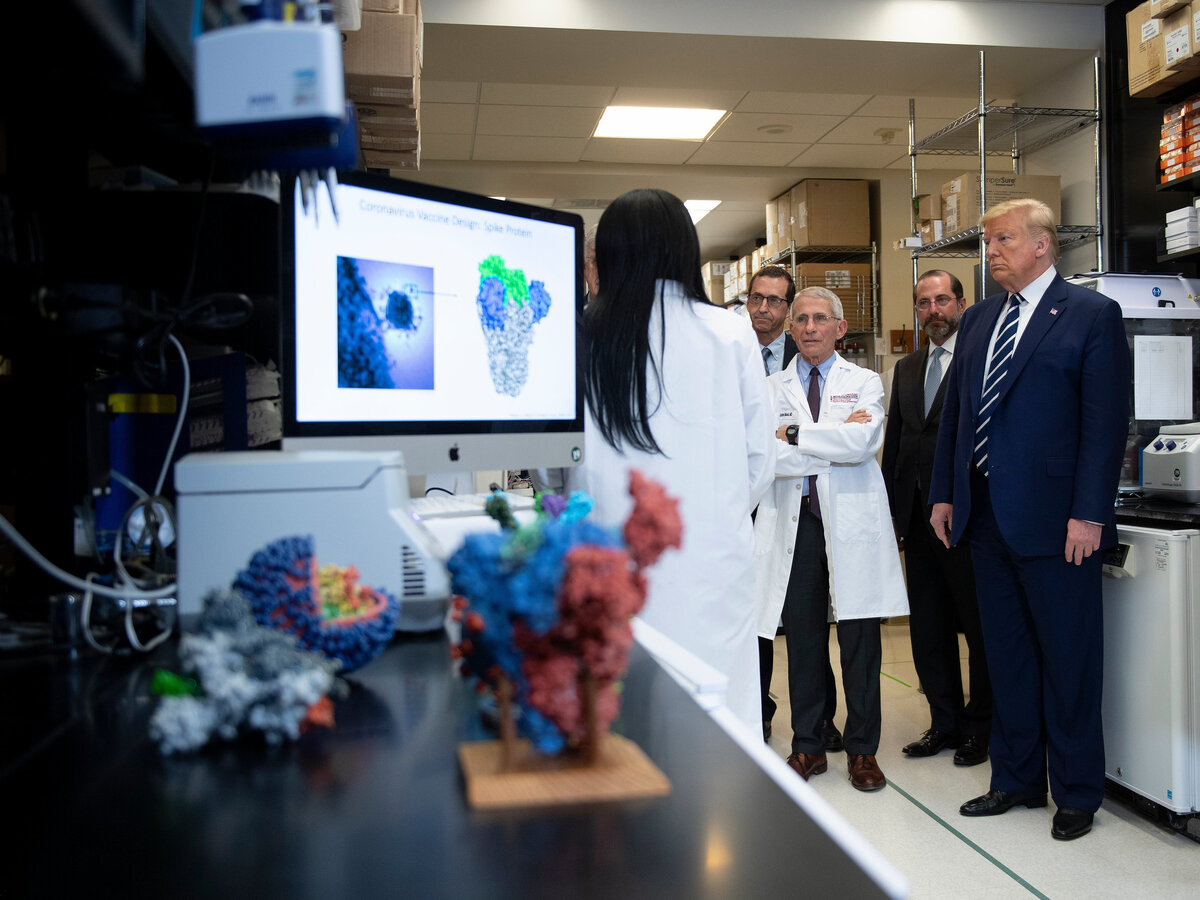 For Trump, it would be best if he didn’t vocalize his hunches and instead let people such as Fauci do the talking, said Saad Omer, who directs the Yale Institute for Global Health. Fauci, an immunologist, has decades of experience communicating with the public about health crises.

“In these kinds of public health emergencies, we need to be able to trust our leaders, be it public health, scientific or political leaders,” Omer said. This will become particularly important in the coronavirus outbreak if there comes a time when the government needs to recommend major lifestyle adjustments to curtail the spread of the disease.

Have the politicians talk to the public about practical things they can do to reduce their risks, like washing hands and cleaning surfaces, he said. And, when asked a technical question, have an expert on hand to answer it.

“People understand if the president or any of the political leaders are not experts in everything,” he said.

In Washington State, Vice President Pence modeled that approach as he talked to reporters after meeting with Governor Jay Inslee and local officials responding to the outbreak there.

Asked whether he backed Trump’s hunch on the mortality rate being lower than the WHO estimates, Pence turned to Debbie Birx, an experienced scientist working with his task force who he calls “our right arm” on the coronavirus response. 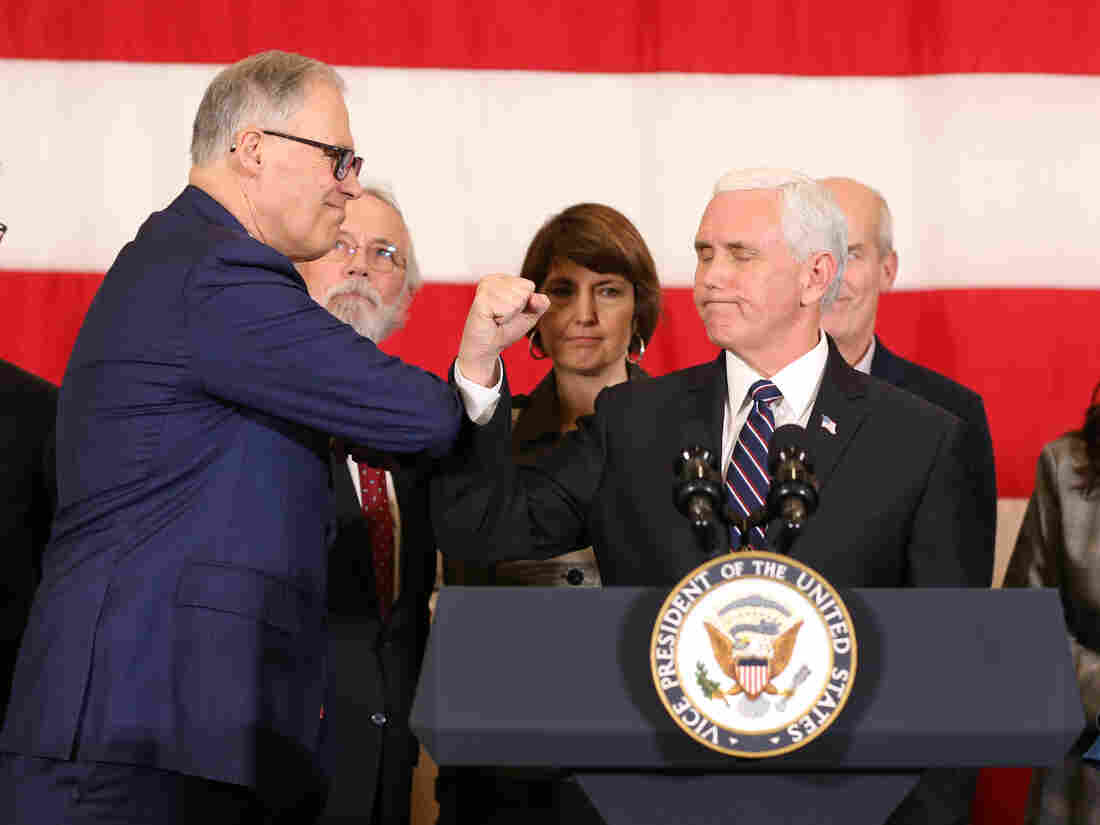 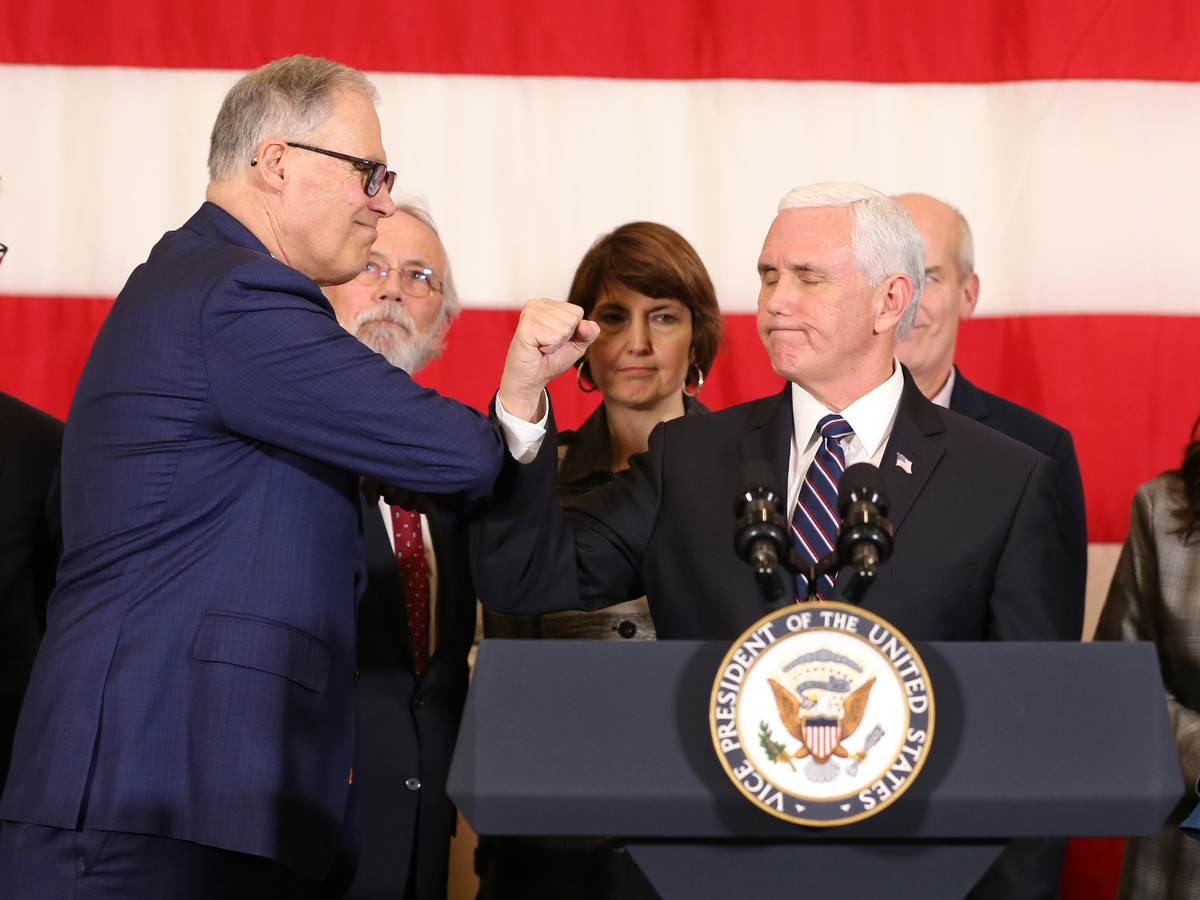