Corporate managers accused of directing an extensive fraud in the cleanup of San Francisco’s toxic shipyard led similar projects at nearby Treasure Island — work that apparently has never been rechecked since fraud at the shipyard was discovered, even as a $5 billion real estate development on the island speeds ahead.

Tetra Tech EC, a subsidiary of the government contracting giant Tetra Tech Inc., is being sued for fraud by whistle-blowers and the Department of Justice. Federal prosecutors say the firm cut corners and falsified radiation tests while serving as a cleanup contractor at the former Hunters Point Naval Shipyard, a mothballed naval base tainted with radioactive substances that last for thousands of years and can cause cancer.

The lawsuit follows an extensive review of years’ worth of test results gathered by Tetra Tech at the shipyard. The review — performed by the Navy, the U.S. Environmental Protection Agency and state health officials — found “a widespread pattern of practices that appear to show deliberate falsification” or failure to perform radiation tests correctly, according to the EPA. Ultimately the Navy decided that all of Tetra Tech’s data were suspect and the shipyard must be retested, delaying the cleanup by up to a decade and costing taxpayers as much as $570 million. 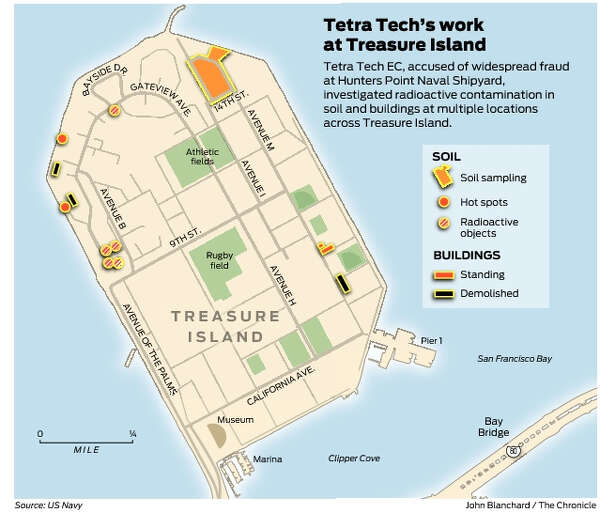 But while revelations about Tetra Tech’s activities at the shipyard have sparked a public outcry, its presence at nearby Treasure Island — another former naval base scarred by Cold War radiation experiments — has attracted little to no attention.

Unlike the bulk of the shipyard, Treasure Island, which stretches for 400 wind-blown acres at the mid-span of the Bay Bridge, is open to the public. It’s home to about 1,800 people, and more are coming: By 2035, the city of San Francisco says, it plans to transform the island into an “eco-city” of 24,000 residents with shops, parks and a hotel. More than half of the island has already been declared free of radioactive hazards and transferred from the Navy to the city. Much of the rest is still being investigated for radioactivity and toxic chemicals.

At a city hearing last May, a Navy official confirmed that Tetra Tech EC handled some radiation-testing projects at Treasure Island, but indicated the Navy had not gone back to check if the work was done correctly. The city’s top official at Treasure Island, Bob Beck, told The Chronicle last August that a review of Tetra Tech’s work there was unnecessary, arguing that it mostly “did not include the kind of sampling where the falsifications occurred at Hunters Point.” 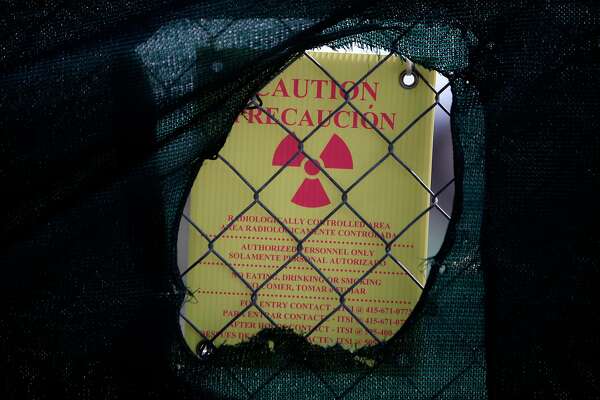 The company’s radiological work at Treasure Island, which occurred in 2007, 2008, 2013 and 2014, was less extensive than at the shipyard. However, contrary to Beck’s claim, the tasks were similar, and in some cases those overseeing it were the same, too: Three Tetra Tech EC managers who supervised radiation tests at Hunters Point were involved with radiation tests at Treasure Island, Navy documents show.

Gaetano Taibi, a radiation expert formerly with the California Department of Public Health who helped oversee some of the cleanup at Treasure Island, said that Tetra Tech’s work there should be investigated too.

“It’s the same players. It’s all suspect,” Taibi said. “You have to clean up this stuff correctly. Otherwise you put people at risk, and the risks are life and death.”

The history of Treasure Island over the last 20 years is a tale of government officials assuring the public that the island is safe and then being forced to admit it is more contaminated than they realized. A 2006 Navy inventory of radioactive substances on the island had to be extensively revised after subsequent surveys found more than 600 radioactive objects inside the housing area that had been missed before. Residents have long been concerned that the island is making them sick.

The Navy said in a statement that Tetra Tech’s work was reviewed at the time it was completed, during the normal regulatory process, and that no problems were found.

“The Navy is confident that findings based on radiological data for work performed by numerous contractors at (Treasure Island) are consistent and accurate.”

Have an important news tip to share? Email us at [email protected], or learn how to contact us securely and confidentially at https://projects.sfchronicle.com/newstips.

The top watchdog agency overseeing Treasure Island, the California Department of Toxic Substances Control, referred questions to the state’s Department of Public Health, which monitors the radiation testing and cleanup. The health department said it didn’t know if other agencies had rechecked Tetra Tech’s work at Treasure Island.

The development group did not immediately respond to questions about what its own review entailed.

Last year, two former Tetra Tech EC supervisors, Justin Hubbard and Stephen Rolfe, were sentenced to prison after admitting they faked soil tests at the shipyard, the country’s largest Superfund waste site, across the bay from Treasure Island. In a lawsuit filed last month, the Department of Justice alleged that Hubbard and Rolfe committed the fraud along with four Tetra Tech EC managers: William Dougherty, Dennis McWade, Rick Weingarz and Andrew Bolt. Three of the managers — Dougherty, McWade and Weingarz — also worked on projects at Treasure Island, according to Navy records.

“Rolfe, Hubbard, Dougherty, McWade, Weingarz and Bolt were each employed by Tetra Tech EC in a managerial capacity at all times relevant to this Complaint,” the government wrote in its filing. “Tetra Tech’s fraud was initiated and directed by Tetra Tech’s corporate managers, including, but not limited to, Bolt, Dougherty, Weingarz, McWade, Rolfe, and Hubbard.”

Tetra Tech has denied any wrongdoing at the shipyard, blaming any problems on a “cabal” of rogue employees. Sam Singer, a spokesman for Tetra Tech EC, said in a statement that the U.S. Department of Justice has not questioned the company’s work at Treasure Island. He also said the DOJ was wrong to call Hubbard and Rolfe “managers” and sought to separate them from the others named in the complaint, pointing out that while federal prosecutors brought criminal charges against Hubbard and Rolfe, they did not charge Dougherty, McWade, Weingarz or Bolt “after extensive investigations.”

Lawyers representing Dougherty and Rolfe did not respond to requests for comment from their clients. Hubbard, McWade, Weingarz and Bolt could not be reached for comment.

Tetra Tech Inc., headquartered in Pasadena, owns dozens of subsidiaries and parts of joint ventures. Tetra Tech EC was the subsidiary that handled radiological jobs, but it was not the only one hired to work on the island. Other corporate entities connected to Tetra Tech Inc. — Tetra Tech EM, TriEco-Tt, ChaduxTt, SulTech — have performed numerous tasks at Treasure Island going back to the 1990s, writing base-wide plans and technical documents that have shaped the course of the cleanup.

Navy records show that when federal, state and city officials gathered to discuss the future of Treasure Island, they often met at Tetra Tech’s offices in San Francisco, Oakland or San Diego, as recently as last summer.

At the city hearing in May, then-San Francisco Supervisor Jane Kim, who represented the district that includes Treasure Island, said she was concerned about Tetra Tech’s work there.

“You never like knowing that there’s a possibility that you are living on land with toxic contamination that can impact your health and also the health of your children and other family members,” Kim told Laura Duchnak, director of the Navy’s Base Realignment and Closure Program Management Office. Referring to Hubbard and Rolfe, Kim said: “My question is, was there any overlap amongst the workers on Treasure Island that pleaded guilty?” She meant Hubbard and Rolfe.

“I don’t know the whole work crews that were in both places,” Duchnak responded. “But we can certainly look at that and make sure that there’s not an issue related to any of those individuals.”

It is unclear whether the Navy did that. 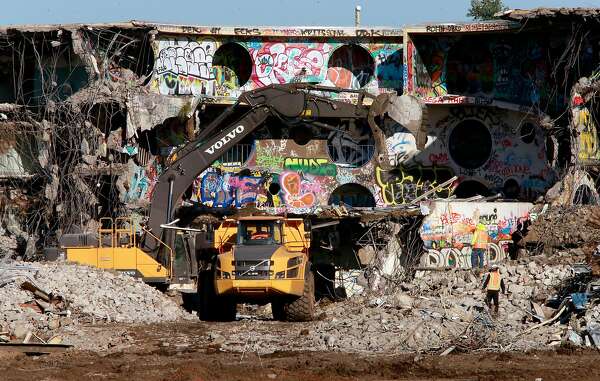 A Chronicle review of Navy records shows that in 2007, 2008, 2013 and 2014, Tetra Tech EC searched a number of soil areas and buildings at the island for potentially dangerous radioactivity.

Specifically, the Navy asked the company to survey five unoccupied buildings — three on the east side of the island, two on the west — and to examine at least seven areas of soil where earlier searches had found elevated radioactivity. The hot spots were next to or near buildings where residents were living.

One of the buildings Tetra Tech surveyed was the site of a radium spill in 1950, according to Navy records; after a glass capsule of radium powder fell and broke, sailors got it all over their shoes, hands, hair and legs. They tracked dangerous particles throughout the building, causing “widespread contamination,” and also took it back to their homes and beds.

“Some of those sailors were carrying so much radioactive powder on them that we could trace their footsteps with Geiger counters,” a Navy official recalled to a journalist in 1958. “We could tell whether they went into the living room and kissed their wives, or walked into the kitchen for a glass of water.”

Tetra Tech also took soil samples across a 4-acre swath of the northeastern tip of the island where radioactive waste was once stored. 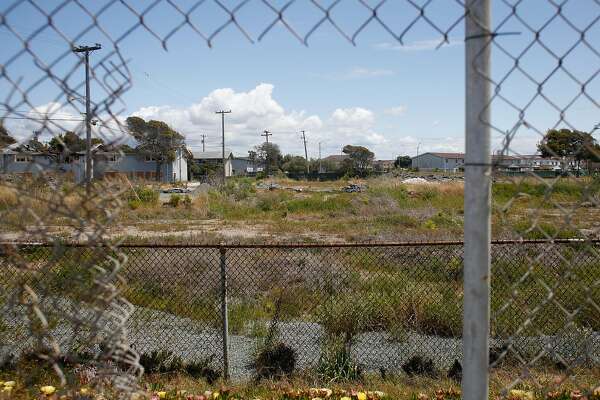 Records show that Dougherty was the project manager in charge of investigating the seven radioactive hot spots around occupied homes at Treasure Island and surveying two of the potentially contaminated buildings. McWade was the superintendent on a subset of those projects, and Weingarz handled laboratory or quality-control tasks. A person listed as “A.N. Bolt” also transmitted three of Tetra Tech’s reports to the Navy and signed his name.

In addition, a person listed in Navy documents as “S. Rolfe” performed radiation surveys of three buildings on the island’s east side while working for a subcontractor. The details appear to match the work history of Stephen Rolfe, who later pleaded guilty to falsifying soil tests at Hunters Point.

After investigating these building and soil sites — unearthing buried radioactive objects, removing some tainted soil and in two cases demolishing buildings altogether — Tetra Tech declared all but one of the areas free of radioactive hazards. Regulatory agencies signed off. The exception was the radium-spill building. Tetra Tech said another survey was needed; the building has since been demolished.

Beck, director for the Treasure Island Development Authority, the city agency overseeing the island, said that Tetra Tech wasn’t working in a vacuum. Public agencies and another contractor vetted some of Tetra Tech’s work by conducting surveys of their own in the same areas. If anything had been wrong, it would have been discovered, he said.

Today, Treasure Island is studded with dirt piles and earth-moving machines as the city and its developers prepare the ground for future construction. One of the areas where Tetra Tech worked, the site of the old radium spill on the east side of the island, has already been declared safe and transferred to the city. It is currently occupied by storage containers, but within a decade, according to development plans, new homes will rise either on that spot or right next to it, nestled by a shoreline park.