You are here: Home / Reviews / Samsung AX5500 Review: An Air Purifier More Powerful Than What its Compact Size Suggests – News18

Air purifiers for homes are now essential devices. At least, we can have some control over the indoor air quality, considering the time we spent indoors can be pollution free. However, not all air purifiers are equals. While there are a lot of claims in terms of air cleaning capabilities and filter quality, not all purifiers are as efficient. If you are looking for a capable air purifier for large rooms, then you could do well to look at the Samsung AX5500, which imbibes a lot of learnings from its more expensive sibling, the AX7000 (around Rs47,990). The AX5500 is priced at Rs33,490.

The differences start with the design itself. It is taller than most indoor air purifiers and is narrower as well. The large air intake vent is on the front, and there are clean air vents at the top and either side. That in total makes for three vents from which clean air emerges, all pointing in a different direction. This really helps with the air flow circulation through the room, as compared with purifiers that may have a single vent at the top or the side. In this price range, we are yet to come across any other purifiers that offer this unique feature. Samsung has joined Philips in adding wheels to the purifier, which makes it a breeze to reposition this, move it around the room if needed and to get it out of way to clean the floor beneath and behind it. The touch-based control panel on the top is great to operate with well-marked. There are separate indicators for air quality in the room and the volume of gaseous pollutants—red is bad, yellow is slightly better, green is acceptable, and blue is completely clean.

The Samsung AX5500 air purifier has sensors for dust and gases, in addition to the ones for particulate matter and volatile organic compounds, for instance. Most purifiers have the latter two sensors, but Samsung has clearly taken this a notch ahead considering dust and cooking gas pollutants are quite common in Indian homes.

When setting up the Samsung AX5500 is when you get your first tryst with the filter layers. What you get with this purifier is a pre-filter, which is designed to capture the larger dust particles at the very first stage. Behind the pre-filter sits the incredibly thick combined filter layer that has HEPA and the carbon filters integrated in one. The thickness, the quality of the fiber in use and the density of the filter layer itself is very good. 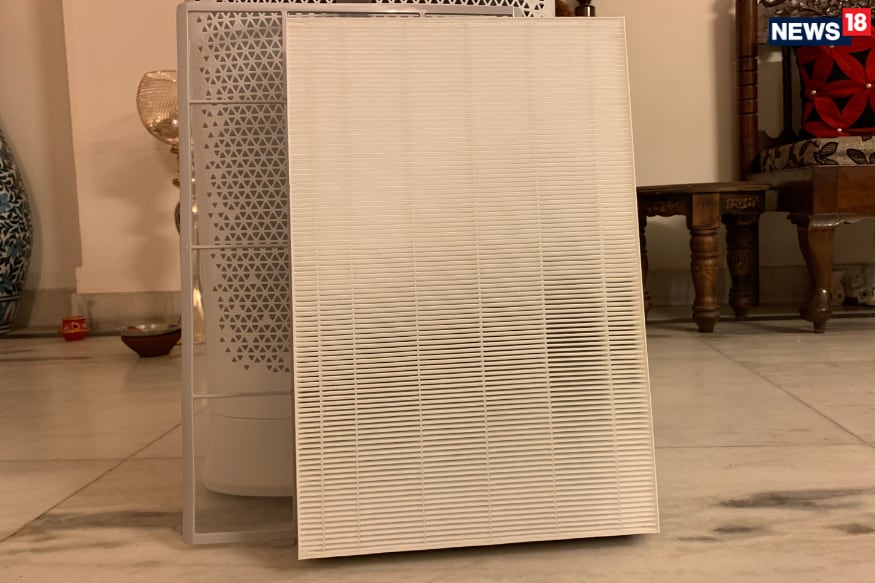 Samsung has rated the AX5500 to work in rooms up to a size of 60 square meter and has a rated clean air delivery rate (CADR) of 455 m3/h. This has a four-stage air-filtration process, the last being which eliminates air-borne viruses as well. Whichever way you look at it, this is an extremely powerful purifier which works very well in large halls too. Set this up and switch it on, and it is quite incredible how quickly the Samsung AX5500 starts cleaning the room. A 32 square meter room, with the air quality rated at a very unhealthy 232µg/m3 as detected on a third-party air quality meter was cleaned to 31µg/m3 of pollutants in 30 minutes. In the next 15 minutes, the Samsung AX5500 brought it down to 9g/m3 before stabilizing it around 15µg/m3 while there was activity in the room. Even at the highest fan speed, the AX5500 is significantly quieter than most of its rivals, which is great if you happen to be sitting in the vicinity.

What we did notice during testing is that the purifier’s own air quality display tends to take a rather conservative estimate of the air quality, which though not always the most accurate of the prevailing indoor quality conditions, still is within 2-3µg/m3 range of what our air quality monitor detected at the same time.

At this price, it is hard to argue with the performance that the Samsung AX5500 is capable of. The high-quality filters, the smart design that lets clean air spread faster in the room and the attention to detail such as extra sensors on board, really make this worth considering as a purchase for the larger spaces in your home. What we could have perhaps expected at this price point are some smart features, such as a smartphone app that connected with the purifier and allowed for remote management of the device. The Samsung AX5500 competes against the very capable Philips Series 3000 purifier (around Rs32,995) which is rated at 393 m3/h CADR and also works very well in large halls indoors. It does not have the uniquely designed triple air vents, but the high-quality filters also allow it to offer similar performance in terms of air cleaning speeds.