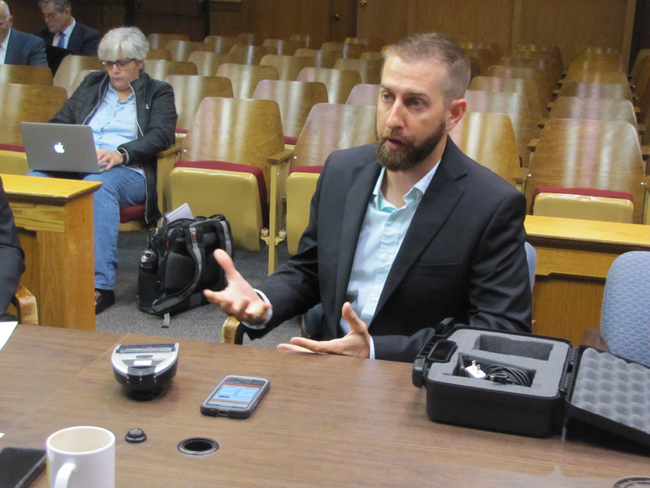 The Town Board on Thursday interviewed a Maryland-based firm called Optotraffic whose product enables officers to issue parking tickets quicker, allowing for more revenue in the process.

“We are interested in traffic enforcement and parking enforcement particularly,” said Councilman Tim Hubbard, who is the liaison to the town’s Parking District advisory committee.

He said the town is seeking to increase revenue but also to eliminate the parking violations occurring downtown, such as people parking in handicapped zones or exceeding parking limits.

“These gentlemen represent a company that puts out a product that will enable our enforcement officers to write a ticket or parking violation in a very quick timeframe, which is very beneficial for a couple reasons,” Mr. Hubbard said of Optotraffic.

“One, it increases your ticket productivity. We don’t want to be known as the ticket writing capital of Eastern Long Island, but we do have to enforce what we have.”

Issuing a ticket quicker also helps avoid a possible confrontation with the person on the receiving end of the ticket, he added.

The cell phone contains Optotraffic’s application, but it can’t be used for other traditional cell phone functions besides calling 911.

“We take photos of the license plate and the violation at the scene,” he said, adding that several photographs are taken and the photos are timestamped. The phone also scans the registration sticker, which extracts the vehicle information into the phone app, he said.

The phone also has a GPS function which marks the location of the violation, and a portable printer, which can print out the ticket.

All of the information is then uploaded to Optotraffic’s server.

People receiving tickets can view the photos, log in and, if they chose to plead guilty, pay the ticket online within a matter of minutes, Mr. Phelan said.

Although board members liked the idea, the board plans to issue a request for proposals to see if any other companies may have a better system. Supervisor Sean Walter said at least one other such company has contacted him.

Currently, the town writes parking tickets and it employs an outside firm as a collection agency for unpaid tickets, Mr. Walter said.