When you follow tech and smartphones closely the constant onslaught of new, supposedly better models coming out can be numbing. It can also wrongly convince you that you need to upgrade your phone that is six, twelve, or twenty months old. The OnePlus 6T is one such phone.

It is a very good smartphone but it’s not much of an upgrade from the OnePlus 6 that launched just five months before it. It has the same processor, same basic design, very similar display and comes in two of the same colours. If you own a 6, you do not really need a 6T. And you might not even want one, either.

But for the rest of the world, for the normal people out there, this is one of the best phones you can buy. It just isn’t, in context, anything new or particularly exciting.

The phone goes on full sale firstly on 1 November in the US, then on 6 November elsewhere including UK and Europe.

The OnePlus 6T looks a lot like the OnePlus 6 and we compare them here. But for a moment, let’s pretend the 6 didn’t exist.

The 6T has a premium glass design and you can have any colour as long as it’s black: Mirror Black (gloss) or Midnight Black (matte). It’s gently curved on the back and is a comfortable weight to hold, though the curve coupled with the tiniest of camera bumps means it does rock when used flat on a table.

It has a dew-drop shaped notch at the top of its large 6.41in display that houses a camera while the speaker is a slit right on the top edge of the phone. We had to adjust how we hold the phone for calls to line it up to our ears properly but this is an issue with many notched phones that don’t house the speaker in a top bezel.

The back panel houses dual cameras and the OnePlus logo while the antenna lines are hidden in the aluminium frame.

With a USB-C port and no headphone jack in all black, the OnePlus 6T suffers a tad from the black rectangle syndrome of modern smartphones. In a line up, it blends in with the LG V40, Pixel 3 XL and Sony Xperia XZ3 as an all-glass black slab.

The loss of that headphone jack jars more than with other manufacturers since it was only five months prior to the 6T’s release that co-founder Carl Pei stood on a stage to announce the OnePlus 6 and claimed people still really wanted one. OnePlus told us it was time to remove it on the 6T, in part to fit the in-screen fingerprint sensor.

The company is between a rock and a hard place – its fanatical community probably wants a headphone jack but the wider public don’t actually care en masse, evident in the acceptance of iPhones without jacks since 2016. It’s the latter market that OnePlus desperately needs to sell to now to break into the mainstream, helped by new operator partnerships.

Removing the headphone jack to fit in a snazzy new piece of tech is the decision. But the big question is, like with the Huawei Mate 20 Pro, does the sensor actually work?

The short answer is yes, complete with funky software animations. It’s not quite as fast as most decent physical fingerprint sensors, including the one on the OnePlus 6. On the 6T it worked through the factory-installed screen protector which we then took off to test again and it seemed fine. It just takes that split second longer than you might expect.

We also ended up re-training the phone twice to read our thumbs and then it seems fine. It’s less good at edge detection than physical sensors and you have to place your thumbprint quite flat. But it’s amazing that it even works in the first place, and it’s secure enough to use for biometrics.

It’s not as fast as face unlock which we found ourselves using more and even works well in the dark, but you’ll still need to rely on the fingerprint sensor for secure transactions and app authentication.

It’s notable that OnePlus still won’t give the 6T an official IP rating, though it did tell us the phone is ‘water resistant’ and uses silicone rings and foam in ports and buttons to prevent water damage. During our testing, our 6T unit took an accidental tumble (in a case, thankfully) into a toilet. Apart from being ashamed at our bathroom habits, at least we know the phone can survive such a dunk.

This is a slick smartphone and we prefer the matte black finish to the gloss option, but like most other black slabs out there it’s nothing new and comes at a time where smartphone design has been largely reactive to the iPhone X. This notched display with no home button or physical fingerprint sensor is evidence of that.

What the OnePlus 6T definitely has going for it (like all previous OnePlus phones) is its high-end specs for a fair price. It has a Snapdragon 845 processor and 6 or 8GB RAM depending on the model you choose.

OnePlus gives you the option of 6GB RAM with 128GB non-expandable storage to hit the lowest price of £499. To totally future-proof your purchase you can also go for 8GB RAM with 128 or 256GB storage.

We tested the 8GB RAM/128GB storage model, but all versions will give practically the same performance. You only need 8GB RAM if you intend to indulge in high level gaming or absolutely cane your phone all day long with tens of demanding apps.

The OnePlus 6T benchmarks using Geekbench (CPU), GFXBench (GPU) and Jetstream (browser) are more telling of phone tech in general than the 6T itself. The scores are virtually identical to the OnePlus 6 as well as the other Android phones we chose to compare with similar specs.

You won’t notice a difference in performance in anything you do or view on the OnePlus 6T compared to other current top end phones.

You view everything on the phone through a vibrant 6.41in OLED display, though its resolution is capped at 1080p. Other phones like the Samsung Galaxy S9 and Pixel 3 XL have more pixel-dense 1440p screens but most people won’t notice the difference and will appreciate the money saved by opting for the 6T. It’s still a higher resolution than the more expensive iPhone XR.

The 6T’s screen has a tiny notch at the top that proves very unobtrusive and is physically the smallest notch we’ve yet used on a phone. The payoff is a large screen with attractively slim bezels.

The haptics on this phone are behind the Pixel 3, iPhone and LG G7. The vibration motor still buzzes audibly and at the same clip for most actions. It’s an area that when done better makes a phone feel surprisingly more premium.

The single down-firing speaker is still here (no stereo speakers unlike the Pixel 3 or S9) but it sounds way better than on previous OnePlus phones. Not great for long video sessions, but good enough for podcasts.

And yes, no headphone jack. Fine, OnePlus. The speaker benefits from the space afforded by the loss of it as there’s more room for sound to resonate, OnePlus says. And there’s a dongle in the box for your headphones.

The company has also launched USB-C Bullets, a version of its excellent headphones with the USB-C connector for a reasonable price.

Watching video looks great on the rich OLED display but bear in mind you’ll either get black bars thanks to the aspect ratio. You can zoom in on video to fill the display but you’ll lose some of the picture and be more aware of the notch.

The cameras on the 6T are physically the exact same hardware as found on the OnePlus 6: a 16Mp f/1.7 main sensor with optical image stabilisation paired with a secondary 20Mp f/1.7 telephoto lens.

Results are really good, if behind the Pixel 3. Although the hardware is the same as before, OnePlus has added some subtle software smarts such as a night mode that clearly boosts low light (see the below gallery for comparison shots). In daylight the cameras cope very well with a good contrast and colour balance, though some over saturation particularly of greens and grass.

The selfie camera is a 16Mp f/2.0 lens that sometimes struggles to take portrait shots but is a capable single lens for most people’s front-facing needs. While easier to turn off than on some other phones, there’s still a beauty mode here that most will likely want to avoid.

But it’s important to say that often studying smartphone cameras can really get you into the weeds: the cameras on the phone are very good. Unless you’re after a specific tone to your photos that doesn’t look like the below images, you’ll be more than happy with the lenses on the 6T.

You might need to click to view the below gallery externally, or use the arrows to scroll: 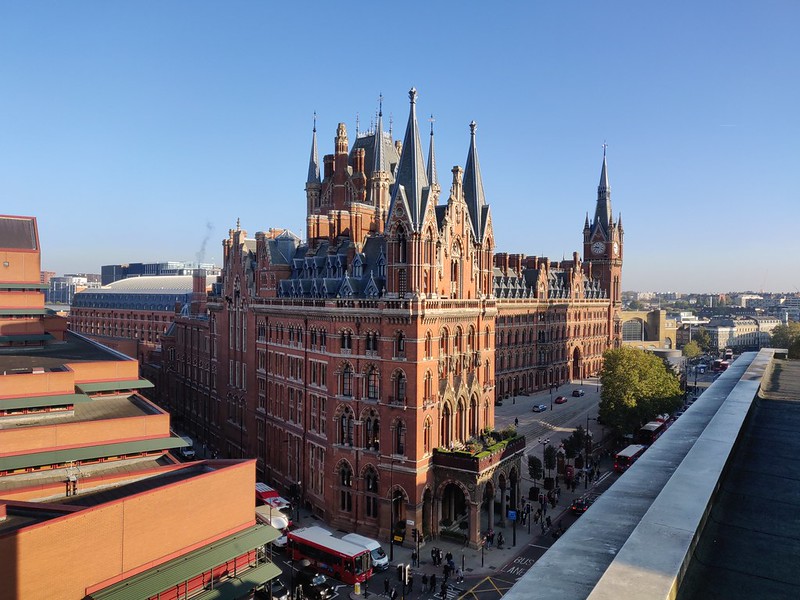 The phone can record video up to 4K at 60fps but most people won’t do this given the overkill (and file size), but the capability is there if you want it. Stabilisation isn’t as good as on the Pixel line but it’s pretty impressive and means the 6T is a phone you can completely rely on as a point and shoot camera and video camera, no question.

The 6T has a 3700mAh battery, on the higher side for an Android flagship in 2018. Thankfully the payoff for making the phone a bit thicker for this reason is outstanding battery performance.

Between charges we without fail got at least four hours screen on time with heavy use, and more often than not were pushing six. If you needed convincing on why to plump for the 6T above others, battery life is one of the main reasons.

Even using the phone to hotspot a laptop for most of a day didn’t run the battery down and we went to bed on about 20%. It’s a notable improvement that we personally don’t mind swapping for no headphone jack (there, we said it!).

Pie with all the trimmings

OnePlus’ OxygenOS skin over Android 9 Pie is very accomplished and probably our favourite Android version along with Google’s on the Pixel 3.

Our review unit arrived with OxygenOS 9.0 but immediately pushed us an update to 9.0.3 that improved screen unlock, added navigation gestures and fixed some bugs. We like how the 6T lets you use Google’s new Pie navigation system, OnePlus’ own swipe gestures (which we prefer) or switch back to the traditional Android navigation buttons.

This is customisation you can’t get even on a Pixel 3, and we love the 6T for it. It doesn’t have wireless charging, proper waterproofing or a headphone jack but the software is truly outstanding for Android enthusiasts and novices alike.

The customisation options are easy to get used to and the OnePlus 6T is one of the most pleasingly individualistic phones you can buy at the moment because of this. Additions like granular controls for gaming mode that stops notifications and locks brightness are the sort of thoughtful changes to Android that we approve of – there if you need them, but completely out of the way and silent if you don’t.

Compared to the rest of the market the cheapest model is still very competitive and this is a no-brainer purchase if you are looking to buy outright. Performance is as fast as the Pixel 3 and the flavour of Android is one we might even prefer to Google’s own.

If you really want a headphone jack, waterproofing and wireless charging you’ll look elsewhere but we are able to look past all three omissions (ones that are shared with many other phones that cost more) and can recommend the OnePlus 6T to anyone looking for a well-priced, flagship spec Android phone.