You are here: Home / Reviews / Nokia Steel HR review – The smartwatch for people who don’t like smartwatches 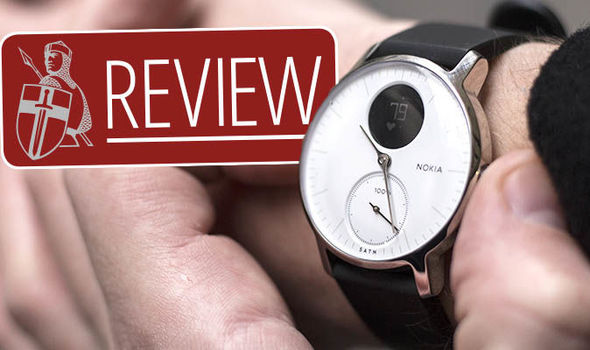 Smartwatches are perhaps one of the more divisive emerging technologies of the past few years.

For some people the smartwatch is just a piece of gaudy tech that doesn’t have the same elegance of a classic watch.

But to others they are the ultimate smartphone companion and, with devices such as the Apple Watch Series 3 offering cellular calling, they can a handy bit of kit if you don’t want to take your phone out with you.

Now the Nokia Steel HR is trying to attract the attention of technology fans and looks to be a perfect halfway house between connected technology and a classy watch.

Express.co.uk has strapped Nokia’s new gadget watch to our wrists to see whether to not you should buy one and here is the full review.

Its 36mm face design is simple, compact and, until you look closely at it, you wouldn’t have any inkling it was a connected device.

Apart from the usual penchants of a typical watch you will also find two circular dials.

The lower circle has one hand and ‘100%’ etched above it while the screen at the top is blacked out and is where the ‘smart’ aspect of the watch comes in.

The band is made from thin silicone and is comfortable and light.

Leather options are available to swap out to, but the silicone ‘sports’ band is the best all round, because it won’t get ruined if it gets wet. 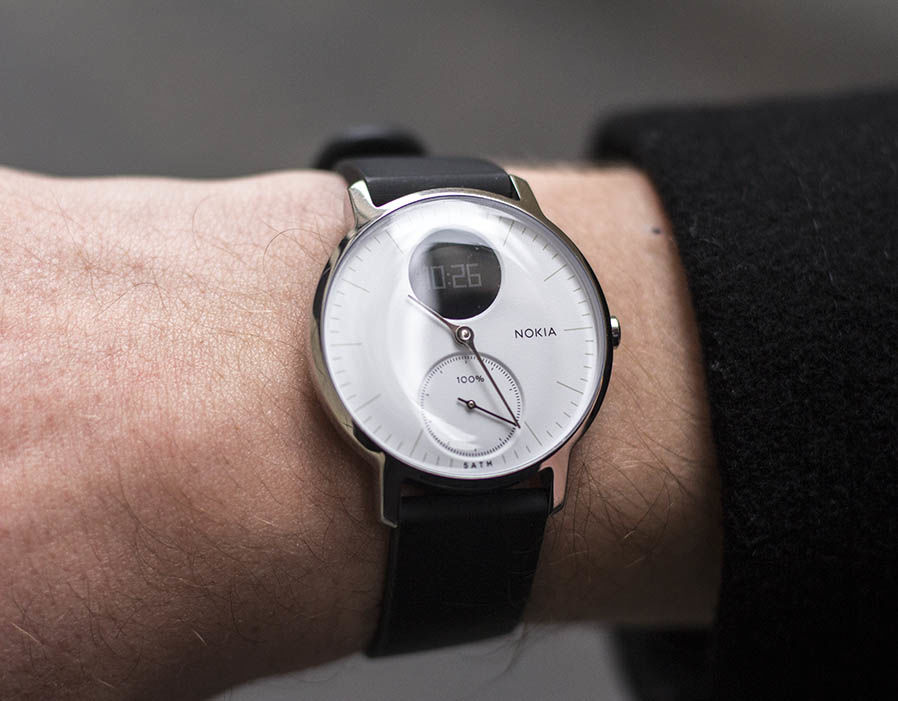 To use the ‘smart’ features included on the watch you have to click the button on the side.

This dial would usually set the time on a standard watch but with the HR, this setting is all done digitally through the app.

Although setting the time is simple, gaining access to the smart functions isn’t.

This is a frustrating part of the design because to get to the screen you want you have to click through every other one and, if you miss it, you have to go all the way around again.

You can change the order of what screens appear when in the app and add or remove certain presets, but it is still a bit annoying and not the most intuitive way to interact with the device.

Screen design is good however and the white/blue lettering and icons are easy to understand and read in any light – thanks to the auto-adjusting brightness.

There is a maximum of seven screens which are: Date and Digital Time, Heart rate, Distance Travelled, Stepometer, Calories, Alarm and Battery Level.

One annoyance with the in-watch controls however is that there is no raise to wake – this means to view the screen you have to physically tap the side button.

This is a little frustrating because to be able to see information, such as the date, at a glance would be hugely helpful. 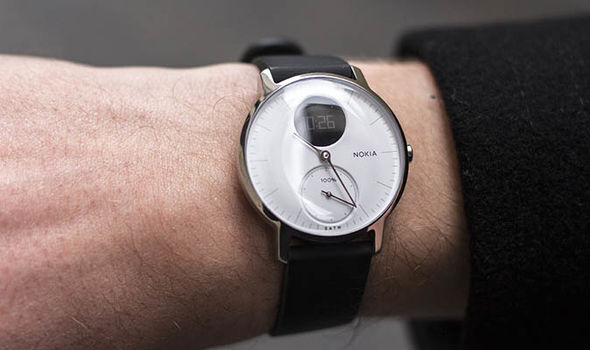 The watch’s design is perhaps its best feature

The notifications integration is almost brilliant.

It will vibrate when you receive a call or text and display the callers name on your wrist which all works really well.

But failing to optimise it to work with other third-party apps, such as WhatsApp, seems like a massive oversight.

To have the option to connect the watch to other social media apps such as Snapchat or Instagram or to link it to emails would also be useful but alas we’re just stuck with text and calls.

Rival devices, such as the Apple Watch, allow access to a huge array of apps and if you want this type of connectivity we’d steer cleat of Nokia’s offering.

For the most part it is a comfortable watch and you get used to it being on your wrist even when exercising, showering or sleeping.

One small niggle however is on the underside of the watch, where the heart rate monitor touches the skin, has a sharp rim.

To touch, it doesn’t seem so severe but after hours on your wrist, or if you don’t have it on the correct band notch, it can be uncomfortable and even leave a mark.

You could wear it looser, but how accurate any of the readings from the watch would be could become contentious.

For the most part, however, it is light and you do forget its on your wrist even while sleeping, which may seem odd to a lot of people but it honestly isn’t a problem. 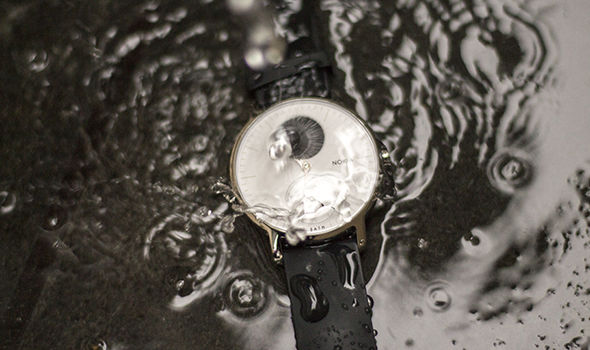 The Steel HR is completely waterproof up to 10 metres

Setting the watch up takes a matter of minutes using the mobile app, which is simple and intuitive to use.

The smart aspects of the watch are at times though, not very smart.

For example it often gets the calculation when you are asleep wrong.

One night it predicted I was asleep at 20:49 when in fact at that time I was showering and wasn’t asleep until midnight.

The heart rate monitor seems to be fairly accurate but, because it plots your HR sporadically throughout the day, the chart of information features more severe peaks and troughs than a constant monitor would.

You can set the heart rate monitor to constantly track while exercising though, by holding down the button on the side for a number of seconds.

Knowing how many steps you are doing at a glance on your wrist and the distance travelled throughout the day is also a nice feature.

Readings from this should be taken with a pinch of salt, however, as it is an accelerometer step counter and not GPS.

As a rough estimate, it is a nice feature and with the in-built goal feature it will notify you if you have reached your daily steps quota. 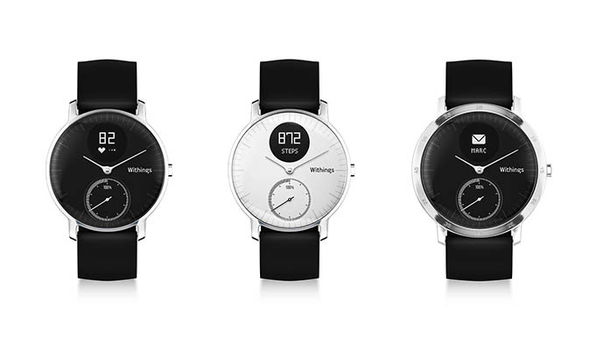 The battery life on this watch is incredible.

Nokia claims that the watch can last up to 25 days on a single charge.

It won’t achieve this if you’re faffing around with the HR monitor every five seconds or using the constant tracking exercising feature but it will dwarf the life of pretty much every other smartwatch on the market.

During the testing phase of this device the Steel HR still had 55 per cent of its battery life after eight days.

The battery life is however a strange one as it seems to estimate its percentage based on how often you are using it.

During a run the watch dropped down to 51 per cent remaining charge but this morning was back up to 53 per cent and this afternoon that figure rose to 55.

Ultimately, it lasts a long time and you won’t be reaching for the charger too often – something that Apple Watch users can only dream of.

The charger will recharge the watch in around an hour and it makes a vibration and flashes up the percentage icon when it is dropped into the dock.

If you aren’t interested by all the bells and whistles of devices such as the Apple Watch 3 or Samsung Gear S4 then the Nokia Steel HR offers a nice alternative.

Its a smart watch which has killer battery life, you won’t be embarrassed to wear and a few nice smart features.

The device isn’t perfect and owning one isn’t going to change your life but if you’re after a good-looking bit of smart tech, then it isn’t a bad place to start.