I used to love playing a game on the SEGA Megadrive console back in the early 90s called Micro Machines.

It was a top-down racer with hard-to-control little mini cars fighting for dominance on tiny race tracks, like a school kid’s bedroom table or a breakfast counter.

That’s exactly what Mantis Burn Racing – reviewed on Nintendo Switch – reminded me of the minute I picked this corker of a little gem up for the first time.

It’s not perfect, and it’s not Mario Kart, but we now have a second race game on the Switch worth taking a look at.

The visuals on this game are excellent, with each race track detailed beautifully in distinct colour palettes and with a real eye for the natural lighting effects that lift it above other Switch titles.

And the gameplay is addictively divine, as you battle to nitro burn and drift you little motor around each circuit trying to beat different types of challenge, other than the usual race-to-win.

For the solo player there’s the classic Career mode, and I like the fact the game maps out a path for you to progress which tests every aspect of your driving ability.

So one minute it’s a full-on race to beat the other five cars in your way and the next challenge will be a solo time trial. Simply beat the time set to progress to the next stage, which may be a points collecting exercise.

It makes the whole thing feel more varied than I was expecting.

All in you’ll have to complete well over 100 races to get through the career mode, across five vastly different circuits.

And it’s all fun stuff, as I found myself mid-conversation on a Saturday longing to get back to the Switch for ‘one more race’. A testament to its un-put-down-ability.

For those who like online play I struggled to get a connection at first, but it did work after a sustained attempt at finding others to play with. And it even offers cross-play with other versions of the game on other machines, like PC.

But the best multiplayer on this game is the split-screen local type.

You and a buddy, end-to-end of the Switch unit, with a joycon controller in hand racing each other literally head-to-head.

There’s something so simplistic and old school about it that it feels great and was a right laugh.

That alone is worth the cheap cover price if you’re a bit of a social butterfly and still want to show off your Switch to buddies on the go.

But I must take a moment to praise Mantis Burn Racing for its plethora of different cars and the ability to customise them more deeply than, again, I was expecting.

You can tweak engines, tyres, even suspension, as well as the look of your car across three weight types.

You see, on the surface this seems like a bit of a throwaway, bargain-bin type of B-list game. One cheaply made to fund a bigger triple-A title.

But the developers have clearly bucked the trend and money available to them here and made a little corker.

Like I said, it’s not the best racer on the Switch. And it does get a bit samey after a while despite the hard work in offering more than just bog-standard racing.

But overall, it’s well worth a look for the budget price of £15. 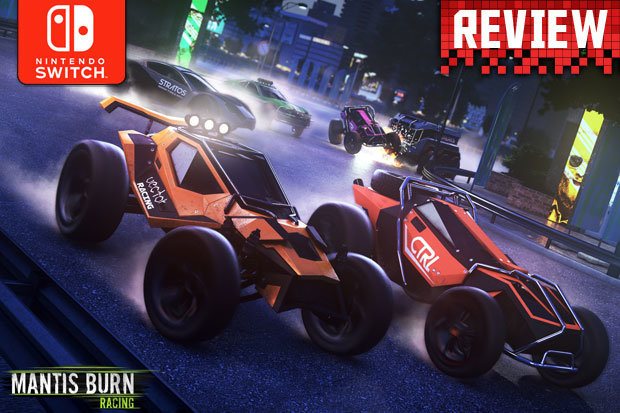