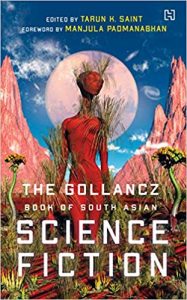 Over the past several months, we’ve looked at anthologies of Chinese, Korean, and Israeli SF, all largely geared towards familiarizing ”outsiders” – namely, English language readers – with these vari­ous national voices. The Gollancz Book of South Asian Science Fiction, edited by Tarun K. Saint, is a little different. Published by Hachette India, it seems directed more toward familiarizing a South Asian readership with their own emerging traditions of SF and fantasy, even though, in his scholarly and generously annotated introduction, Saint makes an effort to link this tradition with Anglo-American SF, mentioning everything from Frankenstein to the cyberpunks while briefly discussing important South Asian authors (I had no idea, for example, that the great film director Satyajit Ray had writ­ten a whole series of children’s SF novels, although he’s not represented in the anthology). Saint also acknowledges that all 28 stories and poems come from India, Pakistan, and Bangladesh – ”the parti­tioned three,” referring to the traumatic separations of India and Pakistan in 1947 and Bangladesh in 1971 that loom large in these stories and poems. As a result, there is no representation of authors from Sri Lanka, Bhutan, or Nepal.

The continuing impact of that partition is only one of a number of issues that seem to haunt South Asian SF and writers. Problems such as air pollution and overpopulation, that seemed urgent in western SF decades ago, are just as urgent as ever here, if not more so; in Clark Prasad’s subtle alternate-universe ”Mirror-Rorrim”, passengers landing in New Delhi in 2029 are warned of poor air quality and urged to wear the complimentary masks provided, while the moon colonization project in Keki N. Daruwalla’s ”The Narrative of Naushirwan Shavaksha Sheikh Chilli” is driven by severe overcrowding – ”By 2087, there was no town or kasbah in India with a population of less than five lakh.” (One indication that the target readership is largely South Asian is the frequent mention of the Indian numbering system, with its lakhs and crores, as well as allusions to such institutions as AIIMS, presumably familiar to Indian readers, but which I had to look up to learn is a network of medical colleges.)

On the other hand, rising sea levels and global temperatures, biotech, robots, gender relations, waste management, and growing political tribalism are as prominent here as in any contemporary SF. Anil Menon’s ”Shit Flower” deals with the failure of an automated sewage treatment system that recalls Paolo Bacigalupi’s ”Pump Six”. In Nur Nasreem Ibraham’s ”We Were Never Here” – the strongest feminist tale in the book – women just decide to disappear into a secret redoubt, realizing that for many men, ”we were never there to begin with.” A close second, though, is Giti Chandra’s ”The Goddess Project”, in which android ”god­desses” help protect women and in which prosthet­ics ”replaced those parts of their bodies that women lost to men, religion, tradition, culture, history, art, risky livelihoods and the dangers of survival.” That same Daruwalla story that features the moon colony mentions that the huge spaceships had to represent dozens of communities, castes, and clans, and that the president of the United States in 2087 ”belonged to the Trumpist Party which had defeated both Democrat and Republicans roundly and soundly.” Despite its grim scenario of a choked and dysfunc­tional 2087, Daruwalla’s acerbic political satire is one of the wittier stories in the collection.

There is a fair amount of humor here. In one of the earlier stories, Harishankar Parsai’s ”Inspector Matadeen on the Moon”, a long-hidden civilization on the far side of the moon tries to improve its crimi­nal justice system by hiring the title inspector as a consultant, but his blatantly corrupt advice backfires badly. Manjula Padmanabhan’s ”Flexi-Time” de­scribes an invasion of earth by aliens who look like ”dangling, shimmering strips,” and inexplicably decide to make their headquarters in India, ”land of inefficient plumbing and a billion contradictions,” choosing as their only contact an Indian scientist, who frustrates his international examiners with the news that – well, that there is no news. (Fortunately, the aliens have also provided him with a kind of time bubble than enables him to pause the passage of time around him, and avoid certain consequences). The scientists’ suggestion that maybe part of the reason India was chosen is that ”we move at our own pace,” as opposed to the ”digitized era with your perfect regularity, your punctuality, your precision.” In Mohannas Salman’s ”The Last Tiger”, a vain and bumbling prime minister – reminiscent of certain contemporary world leaders – decides that the discovery of an Indian tiger, thought extinct, will be the perfect opportunity to boost his popularity, until it backfires in a mordantly bitter conclusion. Chandrashekhar Sastry’s John Collier-like ”The Beneficent Brahma” concerns a failed journalist whose career plan consists mostly of buying lottery tickets, and who finds good fortune with the aid of a tiny UFO. I would like to think that Adrish Bardhan’s ”Planet of Terror”, with its sensational title, atomic pistols, and telepathic lizard-men is meant as a parody of early 1930s SF, but it just reads like bad pulp fanfic.

The importance of the partition in South Asian history is explicitly addressed in Kaiser Haq’s uto­pian dream-poem ”Seventy Years After Seventy Years After Partition” – the title may help explain why so many of the futures described in the anthol­ogy are set in 2087 – and editor Tarun Saint’s ”A Visit to Partition World” describes from several contrasting viewpoints a Westworld-like theme park designed to recreate the world of 1947. But the idea of Indian independence long preceded the actual partition, as the oldest selection in the book indicates. Maya Joshi’s translation of selected fragments from Rahul Sankrityayan’s 1918 novel The Twenty-Second Century has India gaining independence in 1940, followed by a united Asia in 1990 and world government by 2024. Even these snippets – which include unusual details like newspaper recycling and ambitious ideas like gender equality – are intriguing enough to make you want to read the full novel. In fact, imaginary history is also a recurring theme here. Premendra Mitra’s cleverly plotted ”Why the War Ended” is an alternate history in which a secret Martian invasion is revealed by an Amelia Earhart-like aviator lost in New Guinea, and a CERN physicist in Prasad’s ”Mirror-Rorrim” initially realizes he’s passed into an alternate timeline through the subtlest of clues, such as familiar movie dialog being off by one word, until the changes begin to multiply; the title is a play on a familiar Star Trek episode.

Needless to say, South Asian SF isn’t immune to the dystopian trends of recent years, although the ex­amples here tend to focus on particular issues rather than general misery. The central character in Priya Sarukkai Chabria’s ”Dreaming of the Cool Green River” works as an archivist of ”Objectionable Art”, which includes friezes being removed from classic temples, and wishes she had enough money to join the ”Reproductively Eligible Elite” or pay to have a child designed. A corporate-enforced social structure, much like a caste system, but based on ”genetic predispositions,” provides the background of Payal Dhar’s elegant and moving ”The Other Side”, while the redesigned ”New Guys” in Rimi B. Chatterjee’s ”A Night with the Joking Clown”, the volume’s most lively and profane expression of a kind of post-cyberpunk aesthetic, concerning the search for a mysterious online music sensation, are distillations of pure toxic masculinity, somewhere between Cordwainer Smith’s scanners and David Bunch’s reconstituted part-metal men. Sami Ah­mad Khan’s ”15004” is essentially a horror story set in and around the train of that number, whose passengers are infected by an alien virus which destroys ”the ability of the target life forms to ac­cept plurality, heterogeneity and multiculturalism,” resulting in violent murders committed simply because of different languages, religions, nationali­ties, classes, or castes; the terrifying effect is not unlike Tiptree/Sheldon’s ”The Screwfly Solution” extended to all imaginable differences, not just gender. In ”Anandna” by Rukhmini Bhaya Nair, a drug intended to ease end-of-life pain by replacing pain receptors in the brain with pleasure centers ends up creating unexpected havoc in society; it’s a convincingly original idea, played out in classic SF unexpected-consequences fashion.

As should be apparent by now, there’s relatively little hard SF here, and a few stories are essentially fantasy. The title character in Shovon Chowdhury’s ”The Man Who Turned into Gandhi” does exactly that over a period of time, while ”Stealing the Sea” by Asif Aslam Farrukhi satirizes the narrow-minded responses of citizen to the disappearance of a city’s adjoining ocean. The ocean is also central to one of the more elegantly written tales here, Mimi Mondal’s brief and dreamlike ”The Sea Sings at Night”, whose narrator is in love with a sea-creature in a manner that at times evokes The Shape of Water. The most accomplished stories are both SF, though, and come at the very end of the book (this is anthology you might not want to read in order, because of the unevenness of some of the early selections). S.B. Divya’s ”Looking Up” is a touching tale of a disabled geologist who finds a new hope in a one-way mission to Mars, where her prosthesis will even be an advantage, and how this leads to a family reconciliation. Vandana Singh, almost certainly the most familiar name to Western readers, ends the collection with ”Reunion”, set in a drowned Mumbai, in which an aging woman looks back over her life as she prepares to meet a journalist with information about her old friend Raghu, who had disappeared into the Amazon decades earlier. It’s a masterful story of the sort that implies an entire novel, and that seamlessly balances acute character insights with a convinc­ing post-global warming world. As ambitious and varied (and at times uneven) as The Gollancz Book of South Asian Science Fiction is, it’s at its best in the same way SF everywhere is: when it produces sharply realized characters in unfamiliar gardens, and shows us how they got there.

Gary K. Wolfe is Emeritus Professor of Humanities at Roosevelt University and a reviewer for Locus magazine since 1991. His reviews have been collected in Soundings (BSFA Award 2006; Hugo nominee), Bearings (Hugo nominee 2011), and Sightings (2011), and his Evaporating Genres: Essays on Fantastic Literature (Wesleyan) received the Locus Award in 2012. Earlier books include The Known and the Unknown: The Iconography of Science Fiction (Eaton Award, 1981), Harlan Ellison: The Edge of Forever (with Ellen Weil, 2002), and David Lindsay (1982). For the Library of America, he edited American Science Fiction: Nine Classic Novels of the 1950s in 2012, with a similar set for the 1960s forthcoming. He has received the Pilgrim Award from the Science Fiction Research Association, the Distinguished Scholarship Award from the International Association for the Fantastic in the Arts, and a Special World Fantasy Award for criticism. His 24-lecture series How Great Science Fiction Works appeared from The Great Courses in 2016. He has received six Hugo nominations, two for his reviews collections and four for The Coode Street Podcast, which he has co-hosted with Jonathan Strahan for more than 300 episodes. He lives in Chicago.