Companies are scrambling to figure out which foreign investments are most at risk under broad Treasury Department rules that went into effect Nov. 10.

President Donald Trump signed the Foreign Investment Risk Review Modernization Act in August, which would enhance U.S. national security impact review requirements for foreign investments in U.S. companies. But the Treasury Department, without advance notice, revealed in October the law’s interim rules, their effective date, and the 27 “critical technology” industries that would be more exposed to national security review.

The details, which caught many tech companies off guard, could chill foreign investments in the U.S., particularly from China, at a time when more companies are engaging offshore investors. The long list of industries and other regulatory details indicate that Treasury is applying the law as broadly as possible, antitrust and trade lawyers say.

“This is definitely causing a ripple,” Mark Ostrau, chair of the antitrust and trade regulation group at Fenwick & West LLP, told Bloomberg Law. “It’s much more difficult to determine what transactions will run into problems, how long a review will require, and what kind of remedies, if any, are possible to satisfy any national security concerns that come up.”

The Committee on Foreign Investment in the U.S. (CFIUS), a Treasury Department-led interagency panel, currently reviews about 1,500 foreign investments a year for national security risks, research firm Rhodium Group said. But that could go up by about 20% after the law, the firm said in a report released Nov. 9.

The law enacted in August allowed CFIUS to create a “pilot program” to implement the new rules until Treasury finalizes them in 2020. Under the program, U.S. companies developing “critical technology” in the 27 industries—ranging from aircraft manufacturing to biotechnology research—are required to notify CFIUS within at least 45 days prior to a foreign investment’s completion date. Companies can face civil penalties up to the value of the transaction for failure to report, which had been only optional before the rule change.

CFIUS will review any deals in these industries that would give foreign acquirers access to board membership, non-public technical information, or rights to direct, substantive decision-making other than share voting.

Previously CFIUS only reviewed foreign acquisitions that would give the acquirer more than 10 percent of the target company. But CFIUS can now review a deal in any of the 27 industries even if it amounts to less than 10 percent, Rhodium said.

Starting 2020, companies also will have to pay a CFIUS filing fee at 1 percent of the transaction value or $300,000 — whichever is less.

The law “still contains ambiguities that must be addressed during the implementation stage to mitigate uncertainty,” Adam Lysenko and Thilo Hanemann, co-authors of Rhodium’s report, wrote. “Many businesses will struggle to assess whether their transactions are subject to CFIUS jurisdiction under the Pilot Program.”

Broadening of CFIUS’ reach comes amid rising trade tensions between the U.S. and China and concerns that investments from China could pose a national security threat.

CFIUS was already becoming more influential under the Trump administration before the new law’s passage. Trump’s decision in March to stop Broadcom Ltd., then based in Singapore, from acquiring Qualcomm Inc. followed CFIUS concerns about China advancing past the U.S. in 5G wireless technology.

The new law, companies fear, could worsen the tension and trigger a slowdown in investments from China and other countries. 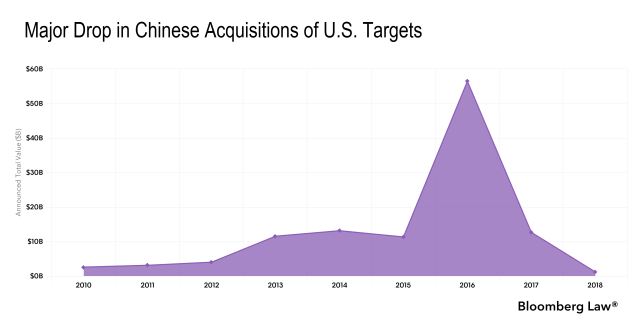 The slowdown is partly due to China’s tightened control on money leaving the country. But it also reflects already heightened U.S. scrutiny of Chinese acquisitions, deal lawyers say.

The new rules “will inevitably have a broader effect across the market, particularly in the early stages of implementation,” Rod Hunter, an international trade partner at Baker & McKenzie LLP, told Bloomberg Law.

Others representing U.S. companies also worry that the law is still unclear which foreign investments qualify for CFIUS review. The Treasury Department declined to limit the definition of a “foreign person” who’s subject to the law—including specifying countries—even though the new law authorizes such limits.

The U.S. Chamber of Commerce has urged the administration to narrow the rules’ scope. The law “sweeps in all foreign persons, including citizens of allied nations,” the trade group said in a Nov. 5 letter to Treasury. Any U.S. company with a minority investment from a foreign person who has certain rights that CFIUS deems to be controlling interest would also be subject to the rules, it noted.

But the rules were meant only to address “ongoing risks arising from the possibility that certain investors, and in particular investors from China, may acquire sensitive technological know-how through investments in critical technology companies,” the chamber said.

The department issued “pretty stringent, broad rules,” Thad McBride, an attorney at Bass, Berry & Sims PLC, told Bloomberg Law. “The potential penalties are substantial, and the breadth of [covered] industries is pretty significant too. They could have limited it to a smaller subsection of industries.”